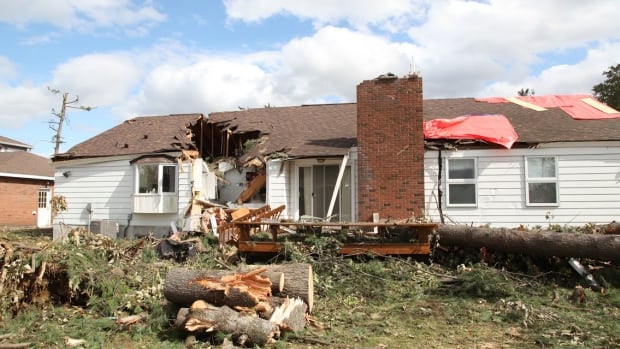 It was Ruth Campbell’s good fortune a fracture, which led to a hip replacement, kept her in hospital for nearly two weeks before a ferocious tornado cut through Arlington Woods, and her home.

The 84 year-old was recovering in hospital when the storm snapped mature pine trees on her property. One tree nearly severed her four-bedroom bungalow in two. Another wiped out the side of the home.

Emergency workers needed a crane to remove the trees embedded in the house. 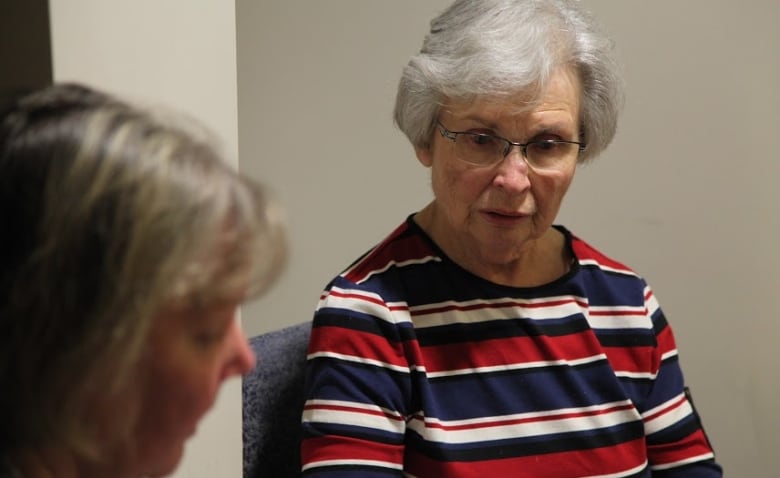 Ruth Campbell was recovering from a hip fracture in hospital when the tornado tore through her Arlington Woods bungalow causing so much damage the home will have to be rebuilt. (Stu Mills, CBC )

Pointing at the gaping hole in her childhood home’s kitchen ceiling, it is hard for Jan Dunn, Campbell’s daughter, to imagine what might have happened if her mother had been at home on Sept. 21.

A clear tarp put over the hole to protect against the rain is shredded and flapping in the wind. A panel of fluorescent lights is dangling from a piece of drywall. Cupboards have collapsed on one another and soil and tree leaves are strewn everywhere.

The tornado, Dunn said, struck right when her mother would have been preparing dinner.

« I knew where my mom sat at that kitchen table and if she hadn’t been in hospital I’m sure she would be killed, because the tree landed on the kitchen table right at the seat she sat at every night. » 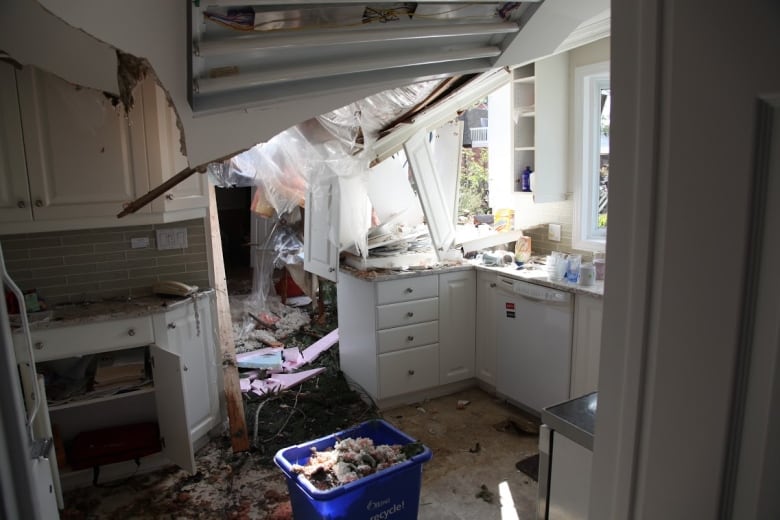 A massive pine tree struck the home and destroyed most of Ruth Campbell’s kitchen, including a cabinet with her mother’s antique china dishes. (Stu Mills, CBC )

To say it’s been a trying few months for Campbell would be an understatement. Six weeks ago — before her hip replacement and the destruction of her home — her husband of 60 years died.

Campbell, sitting in her wheelchair in the hospital, took the loss of her home in stride.

« Well it’s been very abrupt for one thing, » she said laughing. « I don’t know, well, it’s only a house and it can be replaced. »

Campbell said her family was the second to move onto the street. The home has always been « in the woods » she said, and « had everything we needed to raise our family there. »

Jan Dunn fears her mother Ruth Campbell would have been killed if she’d been at home when the tornado hit Arlington Woods. Campbell was in hospital recovering from surgery at the time. 0:30

Once restored, she plans on moving back into the house.

Experts have told Campbell’s daughter they are « 99-per-cent sure » the house would have to be demolished and rebuilt with an estimated move-in date of December 2019.

In the interim, Dunn has found a spot at a retirement home for her mother to live. For now, the challenge is finding clothes that aren’t damaged. 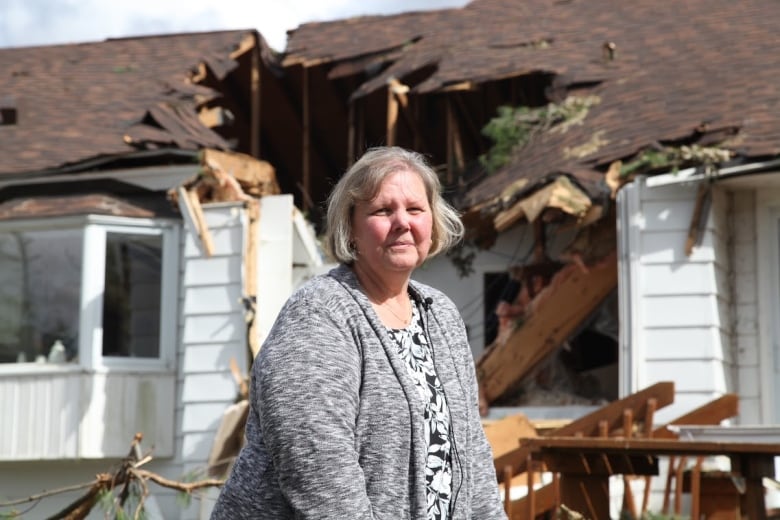 Jan Dunn stands at the back of the tornado-damaged Arlington Woods bungalow where her 84-year old mother lives and where she grew up in. (Stu Mills CBC )

Both women praised the team of volunteers from Arlington Woods Free Methodist Church who came over the morning after the tornado to help clean up and pack Campbell’s belongings that hadn’t been destroyed. Dunn said she had to work quickly to get things out of the house because engineering experts say the entire roof could cave in at any time.

« Trying to say goodbye is trying to find pieces of my childhood as I am going through the house and things are in disarray, »  Dunn said.

« We will restore. We will heal as a family and we will move forward and it doesn’t change the memories of living here and growing up here. »

Toronto is segregated by race and income. And the numbers are ugly