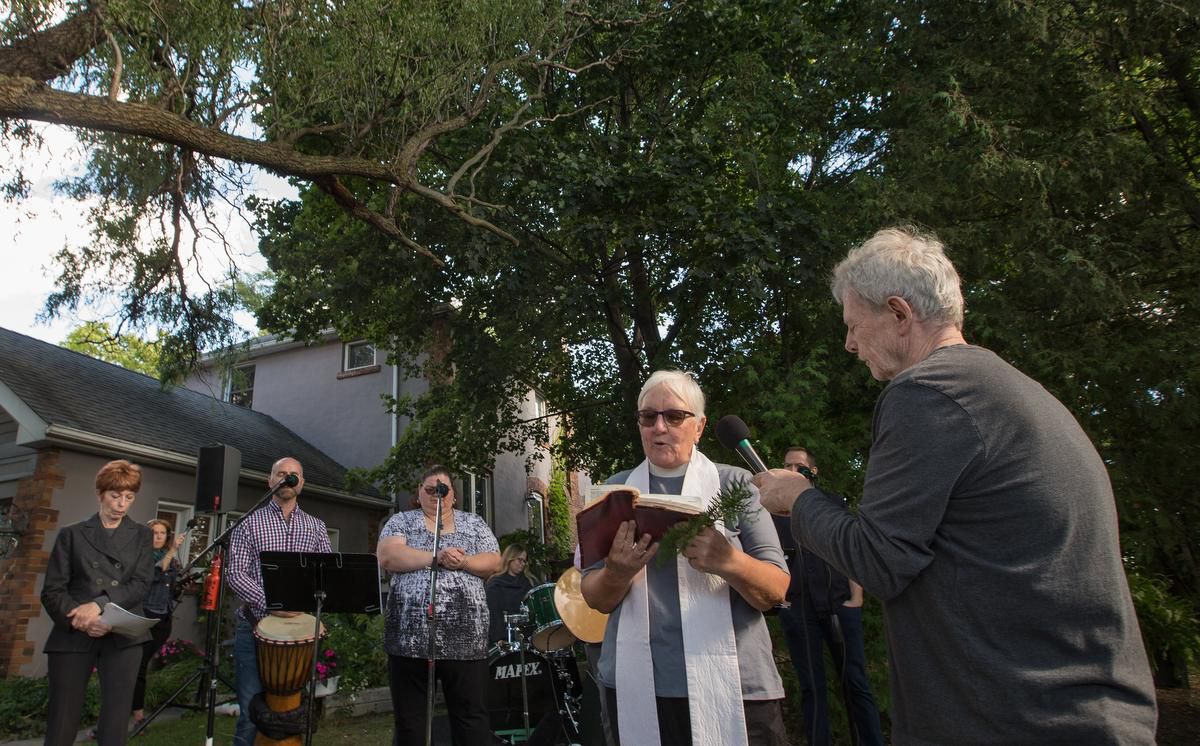 The sky turned bright for a moment as Helena-Rose Houldcroft opened a vial of holy water and sprinkled it, with a few good shakes, over a cedar branch before she paused to speak.

“All water is holy,” the Anglican priest said, “but I refuse to get the hose out and hose you down.”

It was a rare moment of levity in an otherwise sombre, poignant hour Saturday afternoon on the front lawn of Karen Fraser and Ron Smith’s quiet Leaside home.

Friends, neighbours, family and politicians gathered beneath the canopy of mature trees for a ceremony to help the couple bless, cleanse and renew the land where police found the remains of eight men linked to an investigation into landscaper Bruce McArthur. He is charged with eight counts of first-degree murder.

She recalled a poem in which the protagonist felt sad and lonely until he came across the yellow flower. “Lonely,” she said, repeating the word. “That’s one of the reasons those men became victims.”

Fraser promised to send everyone a picture when the daffodils bloom in spring.

Rev. Deana Dudley of the Metropolitan Community Church of Toronto then read the names of the deceased, as Acts 29, a church band, played soft music on the lawn. Dudley’s multi-coloured stole blew in the wind as the crowd stood motionless.

Among those in attendance Saturday were MP Robert Oliphant, MPP Kathleen Wynne and Councillor Jon Burnside.

McArthur, 66, is charged with eight counts of first-degree murder in the deaths of Selim Esen, Abdulbasir Faizi, Majeed Kayhan, Andrew Kinsman, Dean Lisowick, Soroush Mahmudi, Skandaraj Navaratnam and Kirushnakumar Kanagaratnam. The men all had links to Toronto’s Gay Village, and their deaths are alleged to have occurred between 2010 and 2017.

Just a month ago, volunteers helped Fraser and Smith replace the upturned earth and fill in the ditches left in their backyard by the police investigation, putting in fresh grass and new beds of soil dotted with pink flowers.

Even the garage where Fraser and Smith had let McArthur store his landscaping tools got a fresh face: it was painted over with the words “We are one / We are how we treat each other when the day is done.”

Quietly, before the crowd, Ron Smith said that such a ceremony wasn’t something he and Fraser would normally do, but that he was grateful for the kindness of everyone present and the sense of community that came from such “tragic circumstances.”

Smith told the Star he was stunned last winter when he learned of the grisly discovery on his property. “We were always hopeful that it wasn’t really happening,” he said. “It seemed surreal, and all of a sudden it got much more real.”

Looking back, Smith is philosophical. He was in a tornado when he was 14, he said, and since then, he has always appreciated the next breath. “You always wish the best for things but all of a sudden you find yourself in a situation where reality becomes very clear, and then you deal with it moment by moment and by not forgetting the kindness of those around you.”

Jack Uetrecht, a neighbour, trod quietly along the wild stone path to the backyard for a peek before the ceremony began. The 72-year-old contemplated, briefly, the question of why the couple desired to remain in a home linked to such tragedy.

“It’s a nice neighbourhood,” he said. He caught a first glimpse of the backyard and took a breath. “It’s beautiful.”

Correction — Sept. 29: This article has been corrected from a previously published version in which a photo caption misidentified Rev. Helena-Rose Houldcroft.