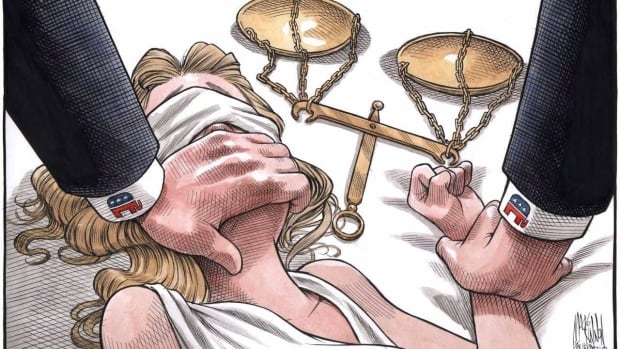 Lady Justice is on her back, blindfolded. And above her, a man with elephant cuffs on his wrist, is pinning her down with one hand and covering her mouth with the other.

« I understand it’s hard for people to look at, especially people who might be survivors of sexual assault, » MacKinnon told CBC News.

« For that reason though, I think a lot of people also agree that you can’t turn off the conversation, pretend it didn’t happen or look away. » 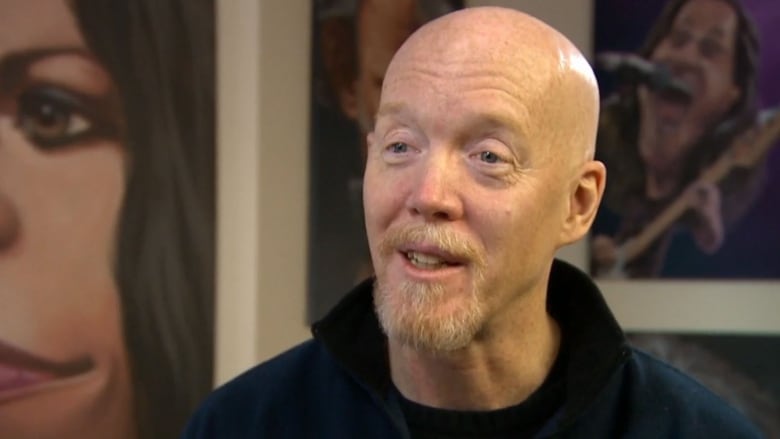 Bruce MacKinnon’s cartoon based on Christine Blasey Ford’s testimony has been repeatedly shared on Facebook and is drawing strong reaction. (CBC)

Ford told the committee Kavanaugh sexually assaulted her when they were in high school.

She alleges that a drunken, 17-year-old Kavanaugh forced her down on a bed, groped her and tried to take off her clothes during a high school gathering in the summer of 1982. She was 15 at the time.

Like many people, MacKinnon was glued to the coverage last week.

« She gave her testimony, it was so powerful and emotional. You couldn’t even take a breath until it was done, » said MacKinnon.

MacKinnon said the cartoon mirrors the alleged attack: « Lady Justice being smothered the way Dr. Ford was allegedly attacked by Kavanaugh back when she was a teenager. »

MacKinnon said he drew the picture from the angle of « the perpetrator. »

« Which is kind of a shocking camera angle, but it was just sort of what was in my head — a bit of a difficult angle to draw from, but it seemed to flow out of the pen pretty naturally, » he said.

« So I think just the way the image fell on the paper kind of grabs a lot of people. »

Since the cartoon was posted Saturday, the cartoon has had a lot of response from people across North America, both from people who believe Ford and those who support Kavanaugh.

Impact ‘all you can hope for’ as a cartoonist

The Washington Post wrote a short piece about it Saturday.

« I guess that means the cartoon had an impact. And that’s all you can hope for as a cartoonist, » he said.

As of 3 p.m. AT Sunday, the cartoon had been shared more than 9,000 times from his Facebook account.

« To underscore the importance of the decision to allow someone who is going to be making decisions on the highest court of the land, to have that shadow hanging over his or her past, I think that’s a pretty weighty decision, » he said.

« A shocking image is probably the only way to be effective. »

More than 1,000 supporters, cancer survivors lace up for Run for the Cure – Saskatoon