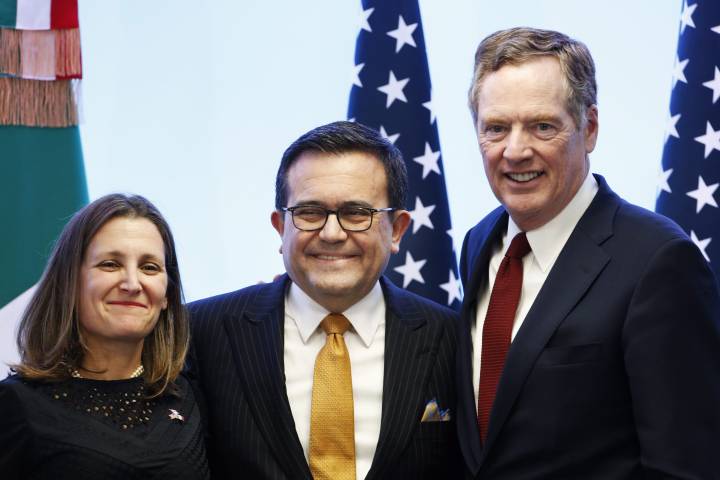 After more than a year of negotiating a new North American Free Trade Agreement (NAFTA), Canada, the U.S. and Mexico have finally inked a trade deal.

Two Canadian sources have confirmed to Global News that the free trade deal has been finalized.


READ MORE:
‘Close, but not there yet’: Sources say U.S. and Canada near NAFTA deal

Reports say that Canada has made concessions on dairy market access that are slightly higher than under the Comprehensive and Progressive Agreement for Trans-Pacific Partnership (CPTPP). Chapter 19, the dispute resolution mechanism, will be kept.

Foreign Affairs Minister Chrystia Freeland cancelled a planned talk at the U.N. General Assembly for Monday, a spokesperson said, and has been in Ottawa since early Sunday working on the deal as the pressure mounted.

U.S. Congress declared midnight Sunday as the deadline for Canada to join the existing agreement between the U.S. and Mexico.

The Trump administration had previously threatened to proceed with an exclusive U.S.-Mexico pact as talks with Canada dragged on amid deep differences over the country’s dairy industry and Chapter 19, a mechanism for settling trade disputes.

The Canadian source said Canada has agreed to a cap on its automotive exports to the United States in the event that the Trump administration imposes global auto tariffs on national security grounds.

Trudeau says if NAFTA deal reached, Trump says no need to worry about tariffs or quotas

The quota would allow for some growth in tariff-free automotive exports from Canada above current production levels, the source said.

The formal NAFTA text is due before Monday in order to meet U.S. congressional notification requirements and allow U.S. President Donald Trump and outgoing Mexican President Enrique Peña Nieto to sign the pact by Nov. 30, Nieto’s final day in office.

Separately, Mexico’s Economy Minister tweeted that it would hand the Mexican Senate the updated NAFTA text later Sunday. If there was an agreement with Canada, the text would be trilateral. If not, it would be bilateral, the ministry said.


READ MORE:
‘We are not working towards a deadline’: Marc Garneau on Canada’s NAFTA approach

Mexico’s president-elect, Andres Manuel Lopez Obrador, previously said he would insist that all three countries be part of NAFTA and that Washington had made a new counter-proposal to Ottawa.

The NAFTA negotiations have been in the works since Aug. 16, 2017. The goal was to “modernize” the trade pact, with U.S., Mexican and Canadian. Officials initially expected to conclude negotiations in early 2018 due to elections later in the year.

-With files from Reuters