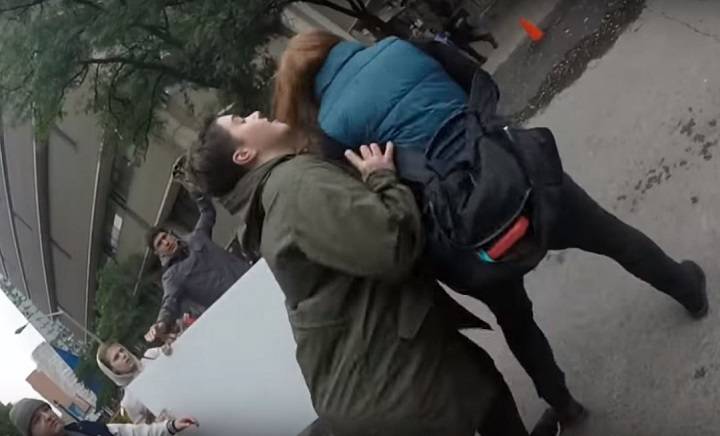 Toronto police say they are investigating another violent incident captured on video at an anti-abortion rally.

Protesters who recorded the video said the incident occurred on Oct. 1 beside Ryerson University.

The incident happened a day after Jordan Hunt allegedly kicked an anti-abortion protester on video at a different rally near Keele Street and Bloor Street West.

That video went viral and prompted plenty of reaction on social media.

In the video near Ryerson University, protesters on both sides can be seen having a discussion about abortion before a person is seen approaching anti-abortion protester Blaise Alleyne and kicking a graphic and controversial anti-abortion sign he was holding.

The attacker can then be seen throwing a dolly and shoving Katie Somers, another anti-abortion protester. The attacker appears to reach into Somers’ backpack, pull out an object and smash it on the ground before continuing to shove her.

“She kicked our signs, shoved them down. They fell down my leg, injuring me … And then I tried to run away, while she picked up a metal dolly and threw it at me and then proceeded to shove me, wrestle me around by my backpack and try to get me to fight her.”

The anti-abortion group is free to protest by law on most of the pedestrian streets around Ryerson University’s downtown campus because the streets are public property, including where the video was filmed.


READ MORE:
Graphic anti-abortion posters spotted in Toronto: As a parent, what can you do?

Somers said they are pressing charges and also plan to launch a civil case.

Alleyne and Somers are a part of the Toronto Against Abortion group, which posted the video on their YouTube page.

The group alleges that the attacker is Gabriela Skwarko, a member of the Ryerson Reproductive Justice Collective and assistant at Ryerson’s Social Innovation Office.

Toronto Against Abortion alleges that Gabby Skwarko was the person who attacked their protesters during a rally near Ryerson.

Global News reached out to the Ryerson Reproductive Justice Collective, but they declined an on-camera interview.

“We have no comment,” said Olson Crow, the group’s co-founder.

“They have assaulted us multiple times and giving into their view point and the way they’ve swung this is problematic and bad.”

Crow did not provide any evidence that Toronto Against Abortion had assaulted members of their group before.

According to Somers, members of Ryerson’s Reproductive Justice Collective have been cited by Ryerson in the past for code of conduct violations because of violence at anti-abortion rallies, including one from March of this year.

Somers showed Global News a brief video of that scuffle.

“We believe that the escalation of violence against peaceful pro-life protesters is becoming a problem and would like it to stop,” Somers said.

“We don’t want our society to turn into a place where people are afraid to share their opinion.”

Christian Domenic Elia, executive director of the Catholic Civil Rights League, said incidents like this have made it difficult for people to openly express anti-abortion views in public.

“For quite some time it’s been difficult to find people who oppose abortion and who would like to prayerfully and peacefully protest against it,” he said.

“It’s been hard because of the violence that we have to endure.”

Global News contacted Ryerson University for a statement Tuesday morning, but officials did not provide comment on the incident.

– With files from Sean O’Shea