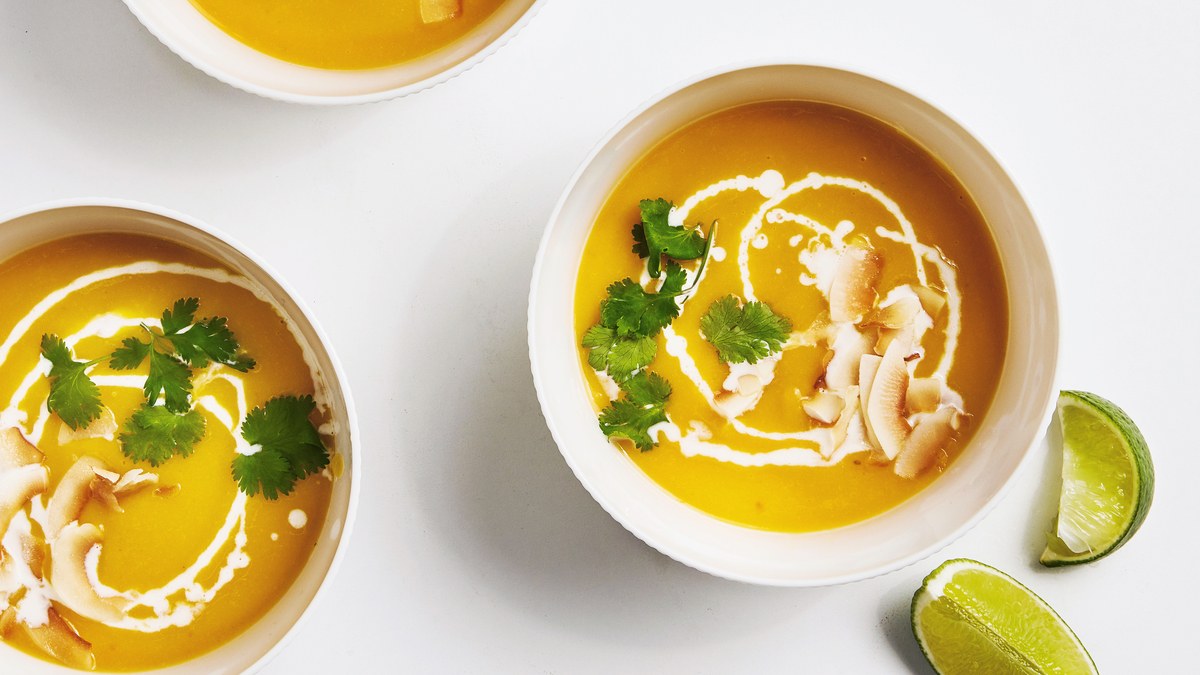 Perhaps you wouldn’t normally listen to an argument for why you need a vegan soup in your life. But perhaps, like me, you’ve made plans this week with a kiddie pool’s worth of gravy, third helpings of buttery stuffing (I’m making this one and adding sausage because I am feeling DEFINITION EXTRA), and “just a taste” of every pie, cake, and tart on the table. I want to pop an antacid just thinking about it! (Note to self: Pack extra jumpsuits in suitcase and avoid pants at all costs this weekend.)

I’d make this gingery butternut squash soup any day of the week, but it’s especially appealing during the relentless gorgefest that is Thanksgiving week, when a Crispy Cheese Twist or bacon-wrapped date is practically catapulting itself into your mouth at every turn (and who are you to resist???) It’s quick, economical, and tastes way more luxe than it should, considering it doesn’t have any butter, cream, or protein. It’s got crispy coconut chips, a tuft of bright cilantro, and a swirl of coconut milk on top to keep you from getting bored. You likely already have most of the ingredients, so all you need from the store is a Big Butternut Boy™, a bunch of cilantro, and a couple of limes.

There’s a common misperception that all soups require lots of time and effort. Although this might be true for some soups (you can’t rush a really good chicken noodle), this one comes together in about 40 minutes—no homemade stock necessary. For quick yet complex flavor, I sauté the power trio of onions, garlic, and ginger to amp up the flavor of the squash. I also add a can of coconut milk to provide body and extra flavor. Everything goes into a blender, so there’s no need to worry about chopping things up finely. At the end, I add red pepper flakes and fresh lime juice for a kick of heat and acid.

Okay, so. The blender. Yes, you need one. No, it does not have to be a $400 Vitamix. (Molly Baz got me a $40 Black & Decker blender to test out specifically for this story, and I was pleasantly surprised to find it worked like a charm.) I’ve made many soups using both an immersion blender and a countertop blender, and I’ve realized that as long as you do it properly, making soup in a countertop blender is far and away cleaner, safer, and better at producing silky-smooth results. Sticking an immersion blender straight into a boiling pot of soup to blend it may seem convenient, but whenever I use one I always seem to end up with a chunky-ish soup and a soup-splattered counter.

There are a few very important rules to keep in mind when blending hot soups. Remember these and I’m confident you’ll never settle for immersion-blender baby food soup again*:

*All that said, if you’re still the most comfortable with a handheld blender and don’t mind that whole chunky-rustic texture, by all means go for it! It will still be delicious.

Once you’ve mastered this soup recipe, you’ve learned the blender method for making any puréed vegetable soup: carrot soup! Sweet potato soup! Cauliflower soup! Ever since I learned how easy and satisfying soup can be, I’ve embraced it as a way to use up vegetables I’ve got lying around that I don’t know what to do with, and I can honestly say I’ve become a smarter cook in the process. Approximately 17,000 gallons of soup later, I’m still deep in the middle of my love affair, with no signs of stopping. So, what d’ya say: Sööp, brøther?