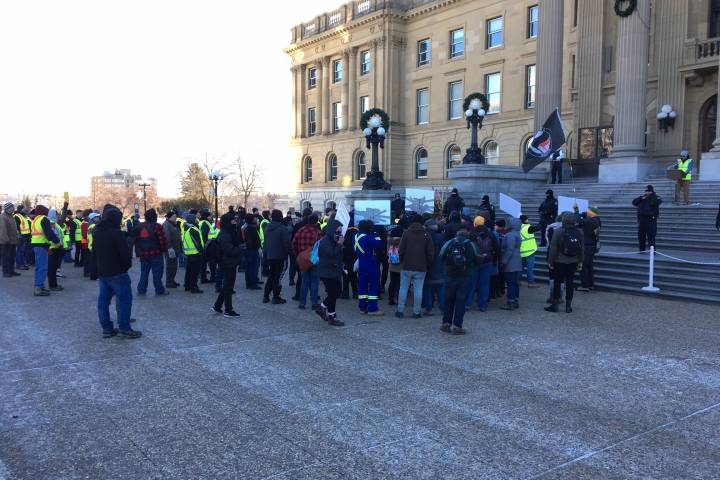 Edmonton police had to break up a fight during protests at the Alberta Legislature grounds Saturday morning.

Members of the ‘yellow vest’ movement and a separate group rallying against racism in Canada were both at the legislature.

During the protests, a Global News camera caught a confrontation on video, where a group of people could be seen grabbing and pushing each other and at least two punches were thrown.

Edmonton police officers were on hand and helped to break up the fight.

After the confrontation, police officers separated the two sides by forming a human barricade.

Derek Horneland attend the anti-racism rally. Horneland said he is concerned with the potential of escalating violence towards immigrants.

“Ever since the yellow vest movement started, I’ve had a number of friends who immigrated here who have gotten death threats,” Horneland said.

“There’s just been a lot of hate towards them, and I think that frustration about jobs has been misdirected to immigrants and it’s becoming extremely violent.”

READ MORE: Here’s what to know about ‘yellow vest’ protests happening across Canada

The ‘yellow vest’ movement has recently seen a series of protests across Canada. The reasons for the protests range from opposition to the carbon tax and delays in pipeline construction to Canada’s signing of the United Nations migration pact.

As speakers representing the ‘yellow vest’ movement expressed their complaints to the crowd, the protesters chanted “Trudeau must go!”

“Our energy allies are laughing at us. They’re robbing us blind and our elected [representatives] in the Supreme Courts, at the elected positions, federally and provincially, are doing nothing but taking a fat paycheque,” said oil and gas worker Mike Wipf.

Similar to previous Edmonton rallies, there were also people in attendance who were wearing jackets with Soldiers of Odin patches on them. The Soldiers of Odin are a far-right group in Canada.