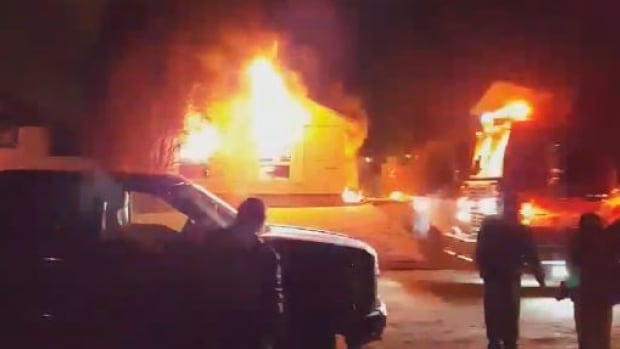 One person is dead and three others are in hospital after a fire tore through a group home for people with disabilities in west Edmonton around 2 a.m. Monday.

Edmonton police later confirmed the death of one of the victims.

Neighbours said the home, at 166th Street and 90th Avenue in the West Meadowlark neighbourhood, housed three people with mental and physical disabilities.

Staff would rotate through the home, said neighbour Ben Zubieto, who lives directly across the street.

Zubieto said he was still awake early Monday when he heard a woman scream outside.

Another neighbour, Zally Ocier, shot video showing the house engulfed in flames as a fire truck arrives on scene.

Warning: This video may be disturbing to some viewers.

One person is dead and three others are in hospital after an early-morning fire at a group home. 0:22

« I saw this lady standing by the sidewalk and she was screaming for help. And the next thing I saw was the fire, » Zubieto said.

Zubieto saw flames coming out of the upstairs window of the split-level house. He called 911 and spoke to the woman who had screamed for help. She worked in the home, he said.

« She was in shock and she was shaking, and she was worried about her clients being inside, the three of them, » Zubieto said. « There’s nothing we could do because the flames were coming out of the windows.

He said the fire was « terrifying » to witness. 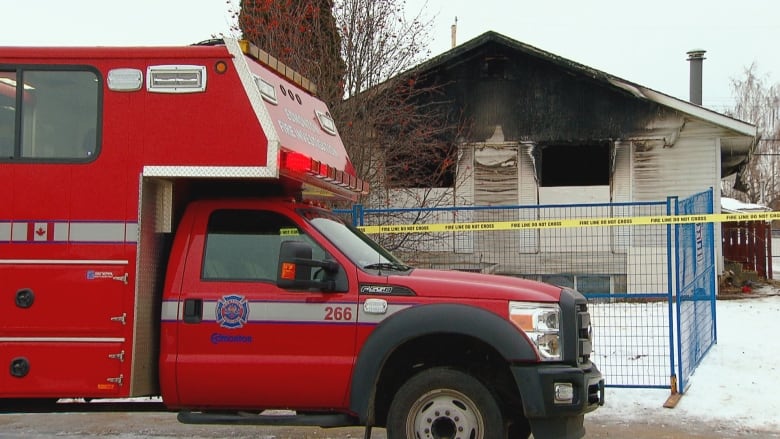 One person is dead and three others injured after a house fire early Monday in west Edmonton. (Nathan Gross/CBC)

« When firefighters got to the address they were able to rescue three people who were inside the home. One was in critical condition, » Mellado said. « They were all transported to hospital by EMS. »

A fourth person was assessed on scene and also taken to hospital.

Fire crews had the fire under control by 3:30 a.m.

A total of five Edmonton firefighter units and 21 firefighters responded to the blaze.

« Our thoughts and prayers are with the family and friends of the victim, especially given this time of the year, » said fire Chief Ken Block.

By late Monday morning, the house appeared severely damaged and investigators remained at the scene.

The cause of the fire is still under investigation.