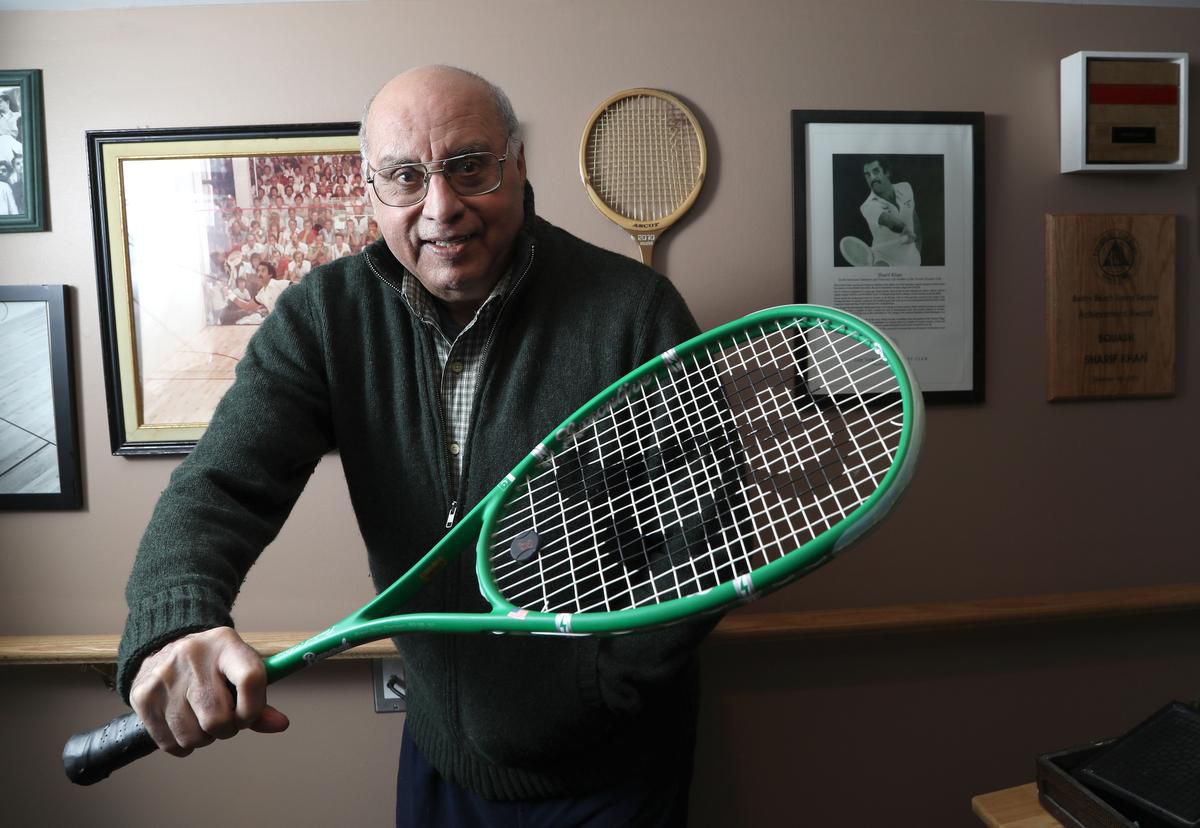 He’s 73 years old now and slowed by a recent stroke. But the man who lives in a humble basement in-law suite near St. Clair Ave. and Dufferin St. was once the undisputed ruler of a booming sport.

They called Sharif Khan the “Sheriff of Squash”— hardball squash, to be exact, the North American varietal of the walled-in racquet game that enjoyed a rise in popularity during the fitness-club boom of the 1970s and 1980s. From 1969 and 1980, Khan won the North American Open, the top tournament on the continent, a dozen times. He was the subject of hundreds of newspaper stories and profiled in Esquire magazine. He rubbed shoulders with tennis stars John McEnroe and Bjorn Borg, once beating both in a made-for-TV competition to determine the greatest all-round master of racquet sports of the day.

But his rise was hardly easy. Born in colonial India, in a small village near the Khyber Pass that would later become part of Pakistan, by age 11 Khan was shipped off to a boarding school in England to fulfil a destiny chosen for him. He’d never eaten with a knife and a fork and he didn’t speak English. But as the eldest son of a great squash champion – Hasim Khan, the patriarch of the so-called Khan dynasty that ruled the game for decades — he was expected to become one. Forced to cope with the realities of being a poor, brown boy at a rich, white school — saddled with a young life, not of his choosing, including an arranged marriage he would later call a “sham” — Sharif Khan ultimately thrived.

And now he’s told his story, with the help of squash writer Rob Dinerman and his third wife, Karen Khan, in a new memoir, The Sheriff of Squash.

“It’s a fascinating journey, and I’m amazed that I’ve done it,” Sharif Khan was saying in an interview one wintry recent morning.

But as much as Sharif Khan always told reporters his competitive drive came from his deep need to uphold his family’s great sporting tradition, there were moments he felt oppressed by it, too. The Sheriff of Squash details an exchange between father and son in the late 1960s, wherein Hashim Khan — a remarkable titan of the sport who won his first of seven British Open championships in his late 30s before carving out a life as a pro at a Detroit racquet club — reacts to Sharif’s announcement of his intention to move to Toronto, where, on account of the sport’s modest prize money he would teach lessons at various clubs.

Writes Sharif, explaining his side of the discord: “Is it too much to ask that a father should have some pride in his son? All along the way I have been set up by his plans, his rules, his customs, and yet he has never given me any support, let alone love.”

Imagine the tension, then, in the lead-up to Sharif’s quarter-final match at the 1970 North American Open. Sharif was the reigning title-holder after a breakthrough win the year before over his cousin, Mo Khan. But to earn the right to move into the semifinals, Sharif needed to beat a towering figure — his father, who was still defeating younger pros late into his late 50s.

Sitting in an easy chair in his living room, Sharif Khan remembered the psychological strain of the moment, the only time he and his father met in tournament competition.

As Dinerman writes in one of the dispatches that dot The Sheriff of Squash: “It was almost as though this endlessly wise patriarch of the Khan clan had decided his eldest son could not be entrusted with being handed the family torch without first being required to wrest it from his predecessor, who had carried this emblem so proudly for so long.”

The match lasted more than an hour, to Sharif’s recollection.

“It seemed like it lasted hours and hours,” Sharif said.

When it ended with the son the victor, three games to one, Sharif said he felt more unease than elation, even though he was on his way to another in a line of championships.

“I didn’t know how my dad would react to it all. Because it was a brutal, brutal match. I pushed out all the stops and hammered him,” Sharif said. “And he hugged me. Big smile.”

It was the first time his father had hugged him since he was a child. When Hashim Khan died in 2014, he was thought to be 100 and possibly as old as 104; he had no birth certificate to go by. Before the patriarch passed, Sharif Khan had the chance to speak with him in their native tongue of Pashto.

“I thanked him,” Sharif said. “I told him that without him incentivizing me, I could not have achieved what I achieved.”

Sharif Khan’s journey still comes with obstacles. He’s been enduring regular bouts of physical therapy to counteract the effect of the stroke he suffered. For a man once known for his superior athleticism, moving around isn’t as easy as it once was.

“My dream, and literally I dream this, is that I will be back on court one day and feel the weight of the ball against my racquet,” he writes in his autobiography.

The weight of the ball against a racquet, the weight of a familial legacy well upheld. In the beginning, Sharif Khan didn’t choose the game, it chose him. And all these years later, he’d give a lot to play another.

Brian Gallant moves up departure from helm of Liberal Party