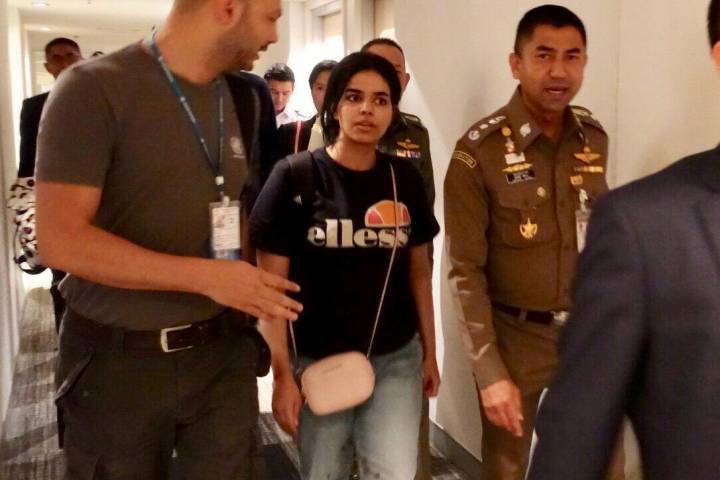 Canada helped persuade the Thai government to let a young Saudi woman seek asylum rather than deport her to Saudi Arabia, according to Human Rights Watch.

Rahaf Al-Qunun, 18, was granted temporary access to Thailand on Monday under the protection of the UN refugee agency, which will evaluate her asylum claims.

While the Canadian government has publicly commented on Al-Qunun’s case, Human Rights Watch said Canada “should be proud” of its role in protecting her rights, telling Global News that  faced serious abuses to the point of murder if forcibly returned to Saudi Arabia.

On Sunday, Al-Qunun told Global News that she was being detained in a hotel room at Bangkok’s international airport as she tried to travel to Australia, where she hoped to seek asylum.

She said she was fleeing her family, who abused her physically and psychologically, at one point locking her in her room for six months after she cut her hair and rebelled against wearing the hijab.

I had been threatened to be killed before and they aren’t afraid to threaten me in public
Do you think this family is modern enough to set and negotiate my life’s choices?
I know they won’t they consider me as property or their slave https://t.co/3HMiQttmw1

Saudi embassy officials seized her passport and told her she would be put on a plane to Kuwait, where her family members were, on Monday morning, Al-Qunun said.

She said she feared being killed by her family for publicizing her abuse and renouncing Islam.

READ MORE: Saudi woman, 18, detained at Thai airport, fears she will be killed if deported home

However, her pleas for help on social media captured international attention, and Thai officials eventually allowed her to enter Thailand under UN protection.

‘Canada should be proud’

Canada’s stance against human rights abuses in Saudi Arabia sparked a diplomatic spat between the two countries last year, but that didn’t stop the Canadian government from engaging with Thai officials in support of Al-Qunun, according to Human Rights Watch.

Phil Robertson, the NGO’s deputy director for the Asia region, said on Twitter that the Canadian embassy in Thailand was “steadfast and superb at every step of the way.”

“Ambassador Donica Pottie and her team worked long and hard on both Sunday and Monday to raise their concerns with the Thai government and UN agencies that Rahaf should not be sent back to Saudi Arabia where she would likely face serious abuses and persecution,” he said.

“The advocacy they did, working with other like-minded embassies in Bangkok, was critical in making the case that UNHCR had to be brought in to provide Rahaf with protection. It was a team effort between embassies, human rights and refugee support NGOs, media, and online activists, and Canada should be proud of the central role they played in this victory.”

Global Affairs Canada didn’t disclose any details on the the country’s role in helping Al-Qunun, but said it was following the case closely.

“Canada is very concerned by and watching closely the situation of Ms. Rahaf al-Qunun,” a spokesperson for Global Affairs said in an emailed statement. “We are in close contact with partners about her situation. Canada will always stand up for human rights, very much including women’s rights.”

Al-Qunun’s frantic pleas for help on social media drew sympathy from activists and lawmakers around the world.

In Canada, the Raif Badawi Foundation, run by the wife of jailed Saudi blogger Raif Badawi, said it was urging Foreign Affairs Minister Chrystia Freeland to take up Al-Qunun’s case.

I want Canada to give me asylum!

An Australian senator called on her government to issue Al-Qunun an emergency travel document so she could fly to Australia.

In the U.K., an online petition calling on Foreign Secretary Jeremy Hunt to grant Al-Qunun asylum secured over 72,000 signatures in less than a day.

Al-Qunun’s asylum claim is currently being investigated by the UNCHR, with the agency’s Thailand representative saying it would take several days to process the case and determine next steps.

Her case has drawn renewed attention to Saudi Arabia’s treatment of women, who cannot travel without the permission of a male “guardian.” It’s a rule that rights groups say prevents women from escaping the clutches of abusive families.

Abdul-Ilah al-Shuaibi, the Saudi ambassador to Thailand, told Saudi state-aligned news outlet Sabq that Al-Qunun has five or six sisters, and that it was difficult to believe that only one of them was abused to the point of fleeing.

He said Saudi officials never confiscated her passport, and denied that Riyadh requested her extradition.

Al-Qunun’s father is a senior government official in Saudi Arabia, a position that Robertson said would have allowed him near-impunity to treat his family as he pleased.