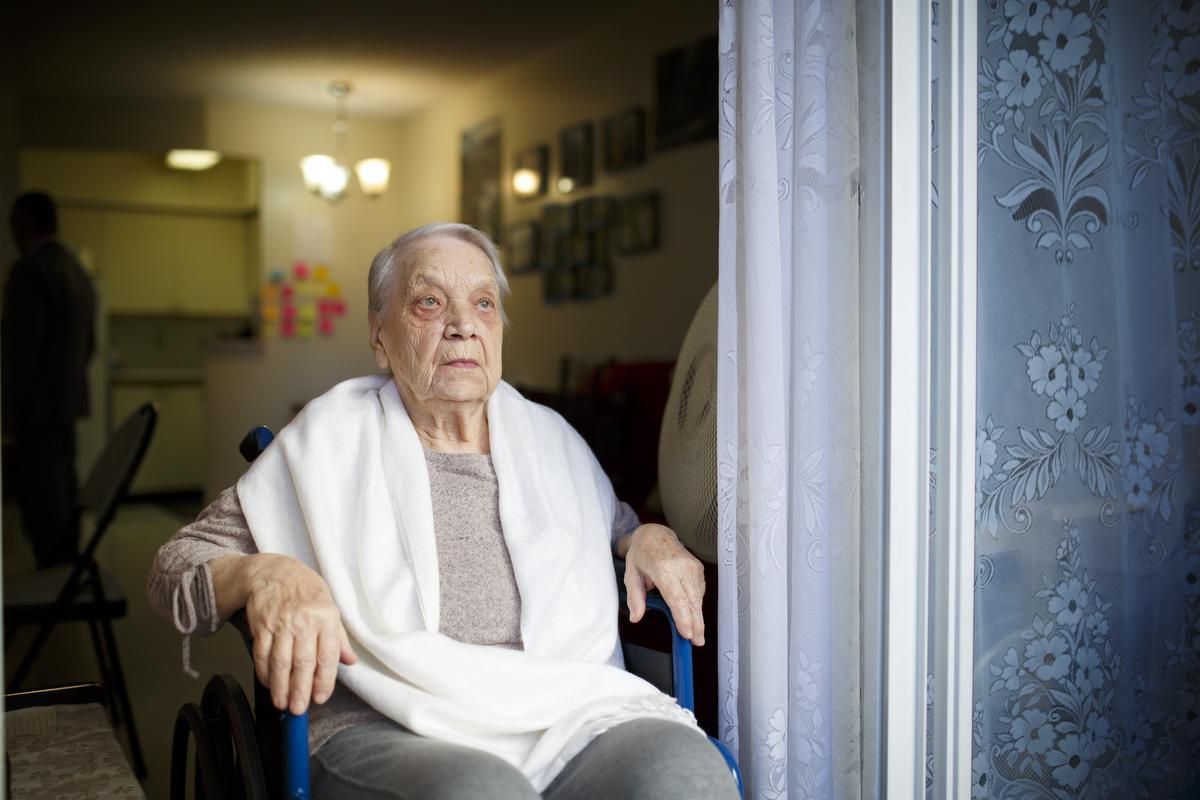 “I think they don’t want to spend money on me,” the Russian-speaking Kozhevnikova said through a translator in an interview at her spartan Yonge St. apartment. “I think they believe that they’ve helped me enough.”

AIG officials declined interview requests. In a written statement, spokesperson Matthew Gallagher said, “AIG is deeply concerned for all the victims of this tragedy and we take our responsibilities very seriously. Working with an independent adjuster, we adhere to processes mandated by the Financial Services Commission of Ontario. This includes ensuring that injured individuals are receiving approved necessary care and that care companies are providing all services for which they are billing injured victims. We are restricted from publicly commenting further on individual cases.”

Meanwhile, almost $40,000 in bills for care, assessments and psychological services have gone unpaid, Kozhevnikova’s paralegal and her team of support workers told the Star.

“This case is personal to me and it should be personal to every citizen of the city and the country,” said Michael Taylor, a partner at the Toronto-based personal injury law firm Taylor, Baber and Mergui.

“She’s a victim of something that transformed Toronto — the first attack in this country using a vehicle to murder innocent victims — and when she turned to the system in place to help her, it victimized her again,” Taylor said.

“Insurance companies do routinely engage in these type of behaviours. What makes this particular case egregious is the fact that the attendant care benefits for our client were approved. Notwithstanding, AIG still managed to delay payment for almost a year, knowing that our client was a 91-year-old survivor of WWII who suffered catastrophic physical and psychological injuries as a result of one of the worst terrorist attacks in this country,” Mergui said.

“AIG owed a duty of utmost good faith to our client and failed miserably in that duty.”

Of the $23,400 worth of invoices filed to AIG for personal-support care since May, the insurer has reimbursed $3,129, according to documents obtained by the Star. Of the $26,500 worth of medical assessments and psychological services billed to AIG by another service provider, $10,800 has been paid out. Of $7,700 billed for physiotherapy services, $3,700 has been paid.

The crux of the dispute lies in a disagreement between AIG and Kozhevnikova’s advocates over how badly she was injured.

Born in a village near in the southwestern Russian city of Kazan, Kozhevnikova proudly lays out on her kitchen table the eight military medals she received from the Russian government, acknowledging her service to the war effort between 1942 and 1945 when she worked in a rifle-assembly factory.

On her dining room wall hang photos of her son and grandchildren, who she followed to Canada in 2006. In her small bedroom, a Russian Orthodox icon of Mary and Jesus sits beside two candles.

Her memory of April 23 begins clearly enough. It was a sunny day. She went out for one of her typical walks down Yonge St., stopping at the bank to pay a utility bill and then at a store to pick up eggs, which she placed in the red push cart she always brought along for groceries.

Then she headed back to her apartment, on Yonge south of Finch Ave.

Her next memory is waking up in St. Michael’s Hospital and seeing her daughter-in-law, Olga, by her side. She had been unconscious for three days.

The Toronto Paramedic report says she was struck by a vehicle travelling 60 kilometres an hour, resulting in an “obvious deformity” to her right femur that left her unable to extend her leg.

What followed were weeks of rehabilitation and tests.

“My right leg isn’t mine anymore,” she said. “I had a complete black out of my memory. My spine is painful. There was such pain in my entire body. I wanted to jump from the top of the building.”

An orthopedic assessment in June, obtained by the Star, concluded her lack of mobility due to a fractured right hip met the “catastrophic determination” for severe physical impairment. And, the report said, she was likely to suffer “mental and behavioural impairment and possibly cognitive impairments” that would meet the test for two other catastrophic categories.

A month later, an occupational therapy assessment ordered by AIG found that while Kozhevnikova was “independent and was actively engaged in her life” before being struck by the van, she now suffered “severe” cognitive impairment, “impaired judgment and clinical reasoning related to her personal safety.” The July 26 report concluded she required assistance with everything from grooming to mobility, and recommended a monthly benefit of $10,231.69 for attendant care.

But an Aug. 1 letter to Taylor from Faber Insurance Adjusters Ltd., acting on behalf of AIG, said the medical information and documentation on Kozhevnikova’s injuries provided “insufficient evidence” of catastrophic impairment.

“They disagreed with the findings of the assessors,” said Taylor. “It’s ludicrous, but that’s how this industry operates.”

A followup psychological evaluation authored by Dr. Mohamed Khaled on behalf of the insurer and dated Aug. 29 reviewed the findings of the previous assessments, and confirmed the treatment plan proposed in them was “reasonable and necessary.”

AIG has now arranged for new assessments of Kozhevnikova this month, using its own medical assessors in order to determine future payments.

Gord Faber, who is managing Kozhevnikova’s claim, visited one of her service providers in September with a member of AIG’s “special investigation unit” to determine the extent of care she was receiving, according to an Oct. 2 email he sent to Taylor.

The support agencies helping Kozhevnikova have continued to provide basic care without full payment, based on assurances from Taylor that the invoices will eventually be paid — if not by the insurer, then by his law firm.

“If we didn’t do that, I don’t think she’d be alive today,” said Taylor. “Or maybe she’d be alive but in long-term care. Everyone involved is carrying enormous financial risk.”

Evgeniya Bakshy, a registered nurse and owner of Wellness Home Care and Services Inc. which has been caring for Kozhevnikova since May, says she is a vulnerable woman who can’t advocate for herself.

“She is a physically, psychologically frail client who doesn’t speak English, a person who can’t stand up for herself. This story is disgusting to me,” Bakshy said. “Her safety is being jeopardized. She’s going to break something, end up in hospital or a nursing home. It will be the government system that will be paying for her care there.”

Viktoria Ginzburg owns 101 Physio, which has been providing physiotherapy and psychological services to Kozhevnikova.

“We’ve been having trouble with (AIG) from the beginning,” Ginzburg said. “They’ve been saying she doesn’t need psychological services. Why I’m really pushing on this one is because of the trauma inflicted. She was hit by a car maliciously and the insurance company is taking the position that she doesn’t need anything. It’s ridiculous.”

Asked why she has continued to supply care without payment, Ginzburg said, “What would you suggest I do? She’s not going to get the help she needs otherwise.”

Kozhevnikova says she was more mobile when she initially came home and had a caregiver working with her steadily. “I could walk a little. The caregiver held the chair behind me. It would help me.”

Now, she’s a shadow of her former self, she says. No more walks down Yonge St. No more going out of her small apartment at all without someone to push her wheelchair.

“Doctors told me I have to walk more. I can make a couple of steps and then I have to stop,” she said, a tear falling from one eye. “I’m by myself. I don’t even go downstairs.”

On Oct. 29, a Toronto law firm acting on behalf of AIG asked to conduct an examination under oath with Kozhevnikova to get information about “the extent and type of injuries sustained” and assess “whether the attendant care was incurred.”

“Examination under oath gives insurance companies an opportunity to grill claimants on every invoice and treatment,” he said. “She’s got no physical or emotional capability to go under oath. They have no moral right to put this elderly lady through this process. They’re just creating delays in paying the benefits, which are causing hardship.”

Robert Cribb can be reached at rcribb@thestar.ca and on Twitter @thecribby