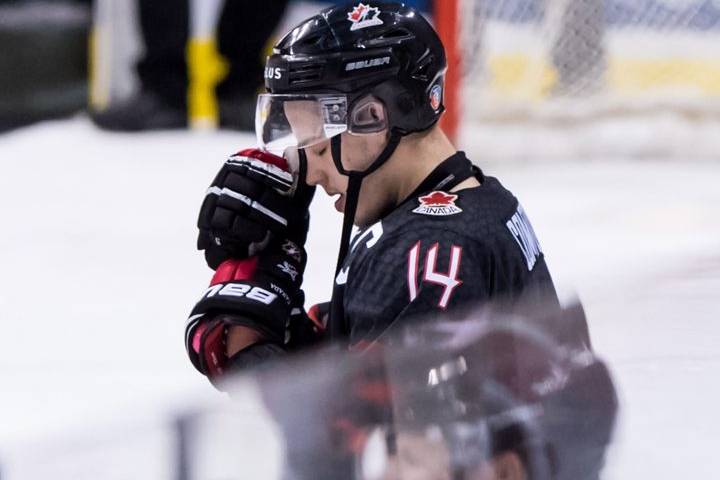 Canadian world junior hockey team captain Maxime Comtois took to social media Wednesday to thank those who supported him during a recent wave of cyberbulling.

“No one should have to suffer through something like this,” he wrote.

“If you are, or have, ever been a victim of bullying, speak up. An ounce of prevention is worth a pound of cure.”

Comtois faced harsh criticism after missing a penalty shot in overtime, resulting in a 2-1 loss to Finland in the world junior championship quarterfinals.

“Playing in the Junior World Championships and presenting Canada is a dream for any hockey kid in the country, and it was mine too,” he said.

“Last year, we came home with a gold medal, but we can’t say the same this year. The line between winning and losing is so thin, especially in this kind of tournament. We learned that the hard way. That doesn’t mean this is the end for us.”

Comtois pointed out that his team, a family of hockey players from across Canada, is young and they can only continue to grow, both as athletes and people.

READ MORE: IIHF World Juniors 2018-19 — Players to watch, Team Canada schedule and everything else you need to know

“This defeat was one of the most difficult to swallow for me. My teammates and I gave everything we had, heart and soul, on and off the ice, to represent our country the best way we could,” he said.

“I am proud to be Canadian, honoured to wear the maple leaf on my chest and represent my country on the ice.”

After the barrage of criticism, the Roy Sports Group, which represents Comtois noted, “It is shameful and incomprehensible that a few cowards who can hide behind social media could make such vicious attacks on these young men’s character after they have battled their hearts out for their country.”

READ MORE: IIHF World Juniors 2018-19 — Players to watch, Team Canada schedule and everything else you need to know

“It was Maxime’s idea to use this as a learning moment for all of the youth of Canada, that cyberbullying is a real problem,” the group stated.

“Like all bullies, we all need to stand up to them and call them out for what they are. Thank you for shedding a spotlight on a major problem in our society.”

Parti Québécois (PQ) interim leader Pascal Bérubé also shared his feeling on the bullying, calling it “anti-francophone racism” as several of the insults pointed out the 19-year-old is a francophone from Longueuil, a suburb south of Montreal, Que.

— with files from The Canadian Press.