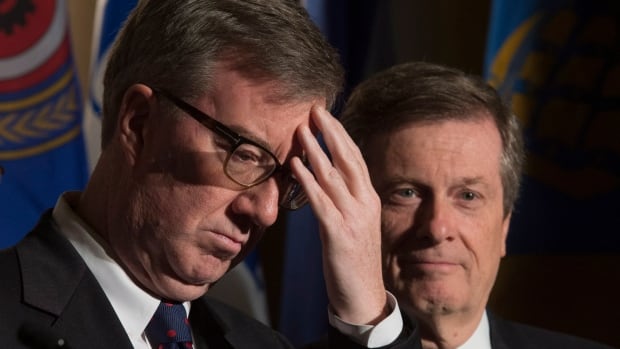 The mayors of Canada’s largest cities are ramping up pressure on the Trudeau government to deliver a major cash infusion to cope with a housing shortage they say has been driven in part by refugees.

The Federation of Canadian Municipalities ‘Big City Mayors’ caucus was to gather in Ottawa today before meeting with Prime Minister Justin Trudeau and delivering its election year wish list for the 2019 federal budget — the last of the Liberal government’s current mandate.

Ottawa Mayor Jim Watson said his city had to absorb roughly $5.7 million in additional housing costs in 2017 related to a spike in asylum seekers crossing the border from the United States. He said he expects the city took a similar hit in 2018.

« What often happens is a government will make a decision at a senior level and the consequences trickle down to us, » Watson said.

« Toronto received $11 million in July to deal with refugee claimants. Our city has received nothing. »

The mayors don’t appear to have a specific sum in mind for emergency federal housing money. In late 2017, the Trudeau government rolled out a 10-year, $40-billion national housing strategy meant in part to address a severe shortage of affordable housing units in major cities, but the mayors appear to be looking for more near-term funding.

Toronto Mayor John Tory said he agrees with Watson that the federal government ought to do more to share the burden of settling refugees outside of Toronto.

« [The federal government] makes the decisions about what happens at the border and Toronto is very supportive, for example, of admitting refugees, » he said. « We’ve had a historically compassionate approach in this country which we support. But the federal government, who admits refugees to the country, also has to take a hand in helping to house and settle them. »

Watson also said the federal government’s decision to legalize recreational marijuana use is ramping up the cost of police drug enforcement in his city.

« In our case we’re going to receive about $2 million for all enforcement inspections … and our staff estimate it’s more of a cost of $8 million so we’re going to have to absorb $6 million in costs, » he said.

« It’s almost like, you know, when the federal and provincial governments sneeze, we end up getting a cold. »

But the major ask from Canada’s largest cities is likely to be for federal transit funding. The mayors are looking for $34 billion over 10 years starting in 2028 for public transit services. Under their proposal, $30 billion of that would be distributed to cities based on ridership — $29 billion going to transit systems with a ridership over a certain threshold and the remaining $1 billion to smaller transit systems.

The other $4 billion would go to boosting ridership and to rural transit systems. The mayors also want the funding made permanent.

« That allows Toronto to think about its next major subway expansion, it allows Halifax to start thinking about bus rapid transit and allows Edmonton to think about where light rail will go next, » said Edmonton Mayor Don Iveson​, chairman of the big city mayors’ caucus.

Iveson said he and his other large city mayors swing considerable political clout in a federal election year.

« These 22 mayors represent more than half the country’s population and two-thirds of its economy. So you know we have an opportunity to influence the course of the country. »

« There have been repairs and upgrades of more than 2,000 kilometres of roads and highways, more than 170 kilometres of new highway, and more than 70 new bridges, » he said in an email. « Public transit across the country has seen improvements, including more than 3,000 new buses purchased, 3,700 buses repaired and refurbished, nearly 15,000 bus stops and shelters been upgraded, and more than 200 transit stations built or upgraded. »

Along with Trudeau, the mayors are expected to meet today with Champagne, Minister of Intergovernmental Affairs Dominic LeBlanc and Bill Blair, the minister of Border Security and Organized Crime Reduction.