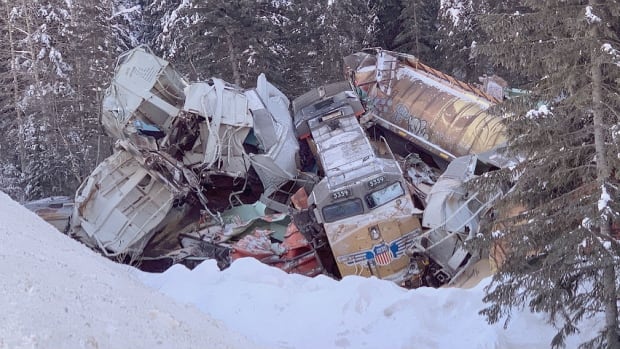 The westbound freight train went off the tracks at about 1 a.m. MT, CP said in a release. The fatally injured crew members were on board the train at the time.

A union representative said the train fell more than 60 metres from a bridge near the Alberta-British Columbia boundary.

Greg Edwards with the Teamsters Canada Rail Conference (TCRC) said the workers had just taken over the train when it happened. 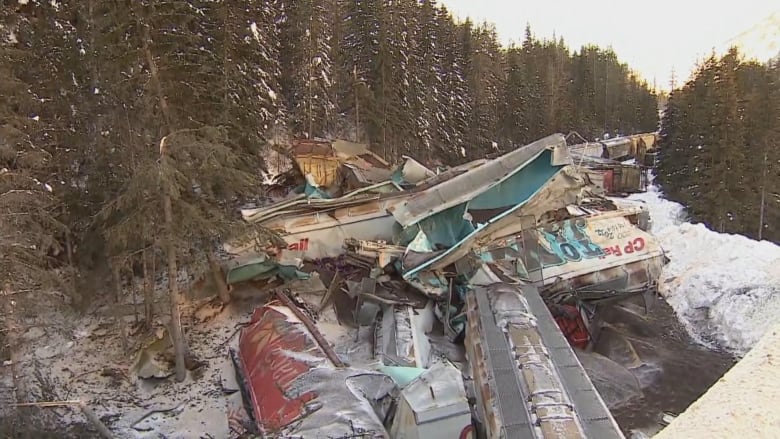 The freight train fell more than 60 metres from a bridge near the Alberta-British Columbia boundary. (CBC)

He says two of them were found near the locomotive, which landed in the Kicking Horse River, and the other was still inside.

The three victims are believed to be a locomotive engineer, a conductor, and a conductor trainee based out of Calgary.

British Columbia’s Environment Ministry confirmed between 30 and 40 grain cars went off the tracks and there was no immediate word of fuel or other contaminants entering the water.

CP said there was no threat to public safety and there were no dangerous goods involved.

« Our condolences and prayers go out to their families, friends and colleagues, » the Calgary-based company said.

« A full investigation will take place to determine the cause of this incident. »

Transportation Safety Board (TSB) investigators were headed to the site of the incident on Monday morning, the agency said in a release.

Eric Collard, a TSB spokesperson, said the site is remote, with access only possible by rail. « So you can’t get to it by road. »

The safety board has not yet released any further information.

« Our hearts and our deepest condolences go out to the victims’ loved ones and co-workers, » François Laporte, president of Teamsters Canada, said in a release. « Our union and its 125,000 members stand with them in mourning, »

Field is about 80 kilometres west of Banff along the Trans-Canada Highway. 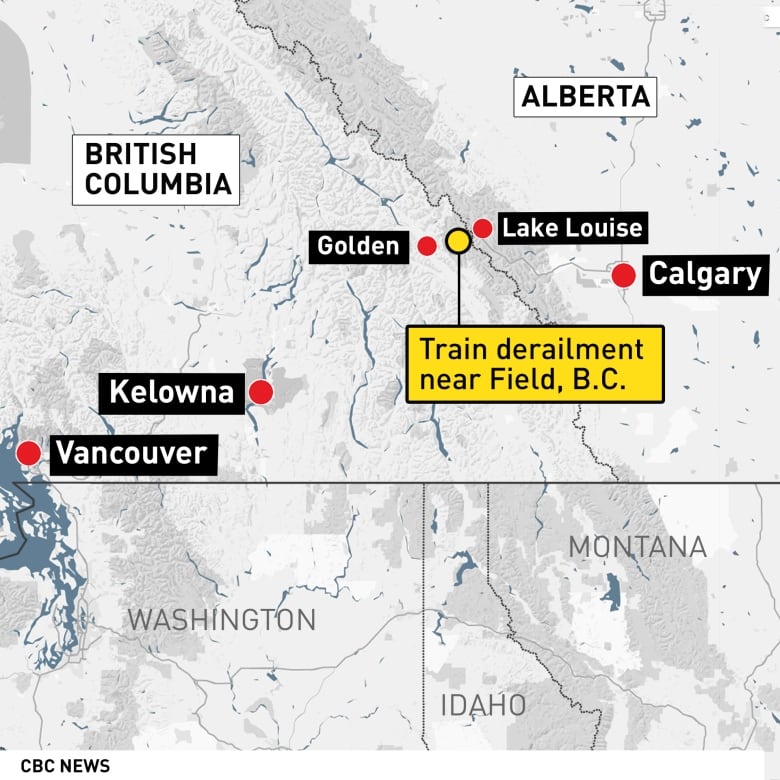 The train derailed near the mountainous border with Alberta. (CBC)

Sixteen cars of a CP train derailed on Jan. 3 in the same area, which is near the Upper Spiral Tunnels, close to Cathedral Mountain, between Field and Lake Louise, Alta.

No one was hurt in that derailment.

« Today, our focus is on this accident as well as the victims’ friends and families. But moving forward, the government and the rail industry will have to recognize that something is wrong and change is needed. Eight workplace fatalities in a little over a year is not something that should be expected or accepted, » Lyndon Isaak, president of Teamsters Canada Rail Conference (TCRC), said in a release.

Three kids hurt after Toronto daycare ceiling falls on them