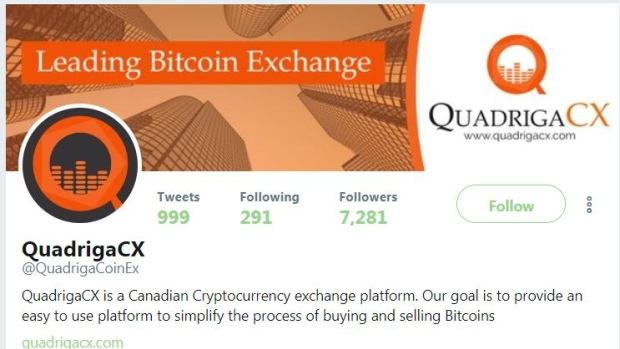 So much for living the libertarian dream.

Canadians who have lost about $200 million escaping the control of « fiat currency, » backed by governments, and market regulation are now asking for help from the authorities to try to get their money back.

The B.C.-based Quadriga is going to court today in Halifax to claim protection from its creditors under Canadian bankruptcy law.

And according to documents prepared for the court hearing, suddenly it turns out that a company widely seen as Canada’s biggest cryptocurrency trader, a company that described itself as a « leading bitcoin exchange » was really just a guy with a computer.

Government should be freaking

And now the guy in question, Gerald Cotten, the company’s CEO and sole director, has been reported by his widow to be dead, taking his passwords with him into the great beyond. And the nearly $200 million in the QuadrigaCX « bank » has gone missing or is inaccessible, locked away in encrypted wallets.

« You know if any other group of Canadians lost $300M from a bank or other finance company, the govt would be freaking, responding and bailing them out but they just don’t care when crypto people lose vast sums of money, » tweeted Canadian lawyer Christine Duhaime. « It’s not right. »

But that kind of sympathetic view is not widespread. 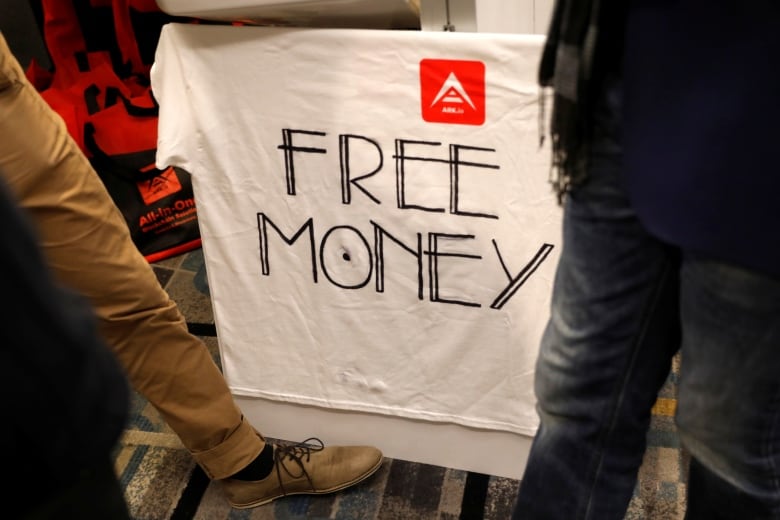 A t-shirt on displayed at the Consensus 2018 blockchain technology conference last year. For many, crypto has been seen as a cash cow.

Early evidence says it may be too late for the people in this case to get their money back, ever. But it stands as a warning to the rest of us tempted to try to make a fortune in a highly unregulated sector.

Among the features of crypto, as it is often called for short, is that its anonymity puts it beyond the reach of normal regulation. According to its advocates, unlike regular money, imagined into life by governments and controlled for their own purposes, cryptocurrency is founded on libertarian and mathematical principles that assure its value by limiting supply.

But a lack of government oversight means that in many ways the business of cryptocurrency has been less than transparent.

« It’s super murky, » said David Gerard, author of the book Attack of the 50 Foot Blockchain. The term blockchain refers to the complex system of encryption used by currencies such as bitcoin, ethereum and litecoin to simultaneously record the value of the virtual money, keep its owner secret and prevent anyone from stealing it.

One of the problems with asking regulators to step in and solve this digital cash conundrum is that almost no one is qualified to do it, said Gerard from his home in London.

« At the moment, literally the best investigative source we have is the QuadrigaCX2 forum in Reddit, » he said. Reddit is an open forum where people with expertise or interest in a subject area can post their findings and speculation.

The problem is that unlike an investigation by an authoritative group such as the RCMP or the Ontario Securities Commission, it is hard to gauge the quality of the evidence being presented. 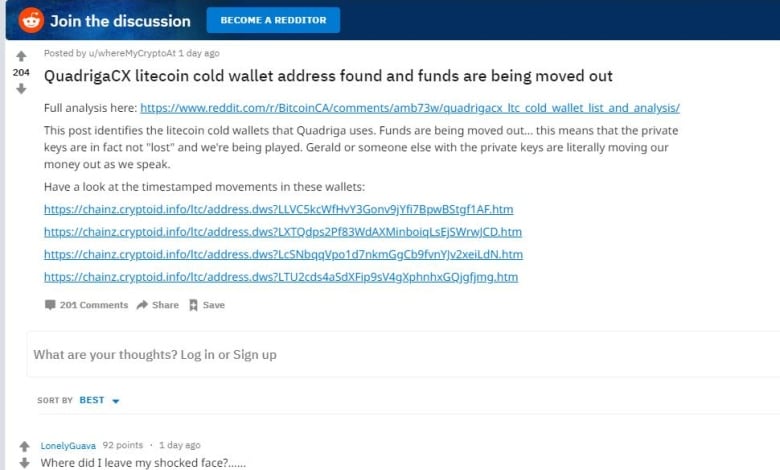 One Reddit post claims that accounts that are supposed to be inaccessible due to lost passwords are actually being drained, but it is impossible to separate rumour from fact.

We know that real cash is hard enough to keep track of when people want to keep it secret. But with bitcoin and its ilk, hidden behind walls of encryption, it is even more difficult to follow the money. And if digital coin encryption could be cracked to get at that money, the entire crypto house of cards would collapse.

On the Quadriga sub-Reddit, rumour mixes with fact. One post claims that accounts of Quadriga’s litecoin, for which passwords were supposed to be lost, are showing activity. Others insist the millions never really were there and the trading platform was being used as a Ponzi scheme, where people were being paid out from new investors’ deposits.

Others on Reddit and Twitter try to poke holes in the Cotten death story, criticizing the quality of the death certificate in India —where an affidavit says he died — skepticism over the cause of death and its timing.

But with crypto, says Gerard, this is the world we are in.

« Cyrpto is amateur hour, it really is, » said Gerard, who in his day job is a Unix systems administrator studying software to keep the bad stuff out of his network.

He says it is possible to build reliable financial systems. Banks do it, but it is complicated and expensive with data backups in different geographic areas. Banks are supported by central banks. Governments insure deposits to discourage runs. Quadriga didn’t have those advantages.

Some crypto exchanges are better than others, but for many young or inexperienced people hoping to make a fortune in the sector, it is really hard to tell if a seemingly credible operator is really just a guy in his basement with a pretty web site.

« People assume these are active institutions that operate under rules and regulations, and they operate under very few, » says Gerard. « I wish it was as regulated as gambling. »

But just because companies are dealing in cryptocurrency doesn’t let governments off the hook. If fraud was committed the RCMP must investigate. If rules weren’t followed, how did the company get away with it?

« I’ll bet the relevant regulators are scrambling right now to see whose jurisdiction they are under, » says Gerard.