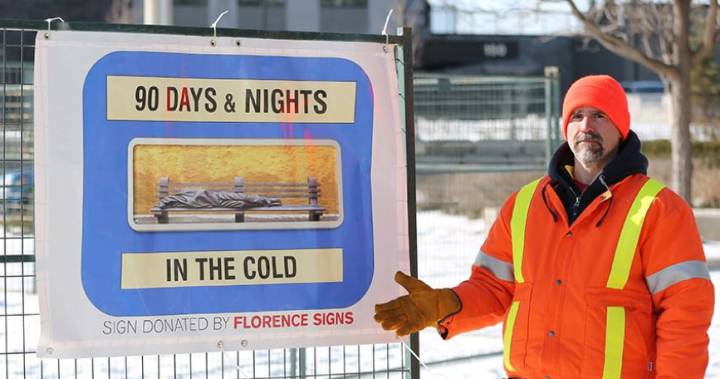 A local man is taking to the wilderness to raise awareness for the homeless across Ontario by sleeping out in the same cold winter nights that many across the province, Canada and North America face each night.

Paul Tavares is once again embarking in his 90 Days and Nights in the Cold campaign, but this year he hopes to raise funds and awareness for 13 individual communities across Ontario.

Tavares began his initiative two years ago to promote awareness for the homeless in Cambridge, and did so by spending cold nights out in the same environment as the homeless.

In that effort, Tavares raised $10,000 for charities and organizations in Cambridge including Cambridge Shelter Corp., CVCF Urban Hope and the Cambridge Self-Help Food Bank.

All donations raised in one community will stay within that city, according to Tavares. He expects the brunt of the donations to come in near the end of his campaign.

CJOY News in Guelph caught up with Tavares in hopes of speaking with him ahead of his stay in the Royal City, but on Tuesday morning he told us that he was no longer in town.

“I left Guelph last night,” Tavares said over the phone on Tuesday.

“Twice in three weeks, I stayed one night in Guelph and moved on because I didn’t have a secure location. I guess some of the neighbours were a little restless and thought I was only going to be there for one night.”

Tavares said he didn’t want to cause any trouble for the person who agreed to host him in Guelph. But it’s not the first time that a complaint from a concerned citizen has resulted in Tavares moving. He mentioned a similar situation in Kitchener. In that scenario, a local business stepped in and offered its property.

“It was just one person, two people maybe,” Tavares said. “It’s still something that homeless people face on a regular basis. It’s a daily struggle if they’re not in the shelter system, or even if they are. Find a place to stay, find a place to eat or find a friendly face. It’s a struggle.”

Tavares’ journey will take him across Ontario as far east as Ottawa and Cornwall all the way north to North Bay and all the way north and west to Thunder Bay, where temperatures will feel like -40 C on most nights.

He’s dealt with extreme weather before.

“I expect some extreme weather,” he said. “Minus 40 C has been reported several times. Minus 36 C was my lowest temperature while I stayed in Hamilton. I had three consecutive days which averaged about -35 C. That’s really nothing compared to what’s possible in Thunder Bay.”

Many of his stops have featured good and humble receptions. Tavares says the further he is from his home base of Cambridge, the more well-received he is. In North Bay, he already has a good plan in place in case of extreme weather. “I will be out in a parking lot adjacent to a social services building,” he said. The people there “will actually give me a key-fob to use for bathroom or emergency use should extreme weather come.”

While he was in his home base of Cambridge two years ago, many locals would stop by with donations and coffees as he became well-known throughout the community.

The good faith continued when Tavares visited Hamilton. A member of the OHL’s Hamilton Bulldogs connected Tavares, along with the local advocacy group Helping Hamilton Homeless. They asked Tavares if he would join them in raising local awareness.

Paul Tavares 90 Days and Nights in the Cold is on Facebook. A GoFundMe page is also available and the web page is https://t.co/JrMBv7TV6c. Paul tells us any funds raised in cities where he is out in the cold stay in those cities.

The organization will hand out tickets to the Bulldogs game that day to several of the homeless community in Hamilton. Following the game, Tavares says he’s already been given the green light to set up his tent and materials outside the FirstOntario Centre where he will raise awareness and hopefully collect donations from Hamiltonians and Bulldogs fans alike.

Paul Tavares’ initiative continues until April 13 and donations are accepted in many outlets until then.

You can donate online at the 90 days and nights in the cold website.

Listen below to Paul Tavares’ chat with CJOY.