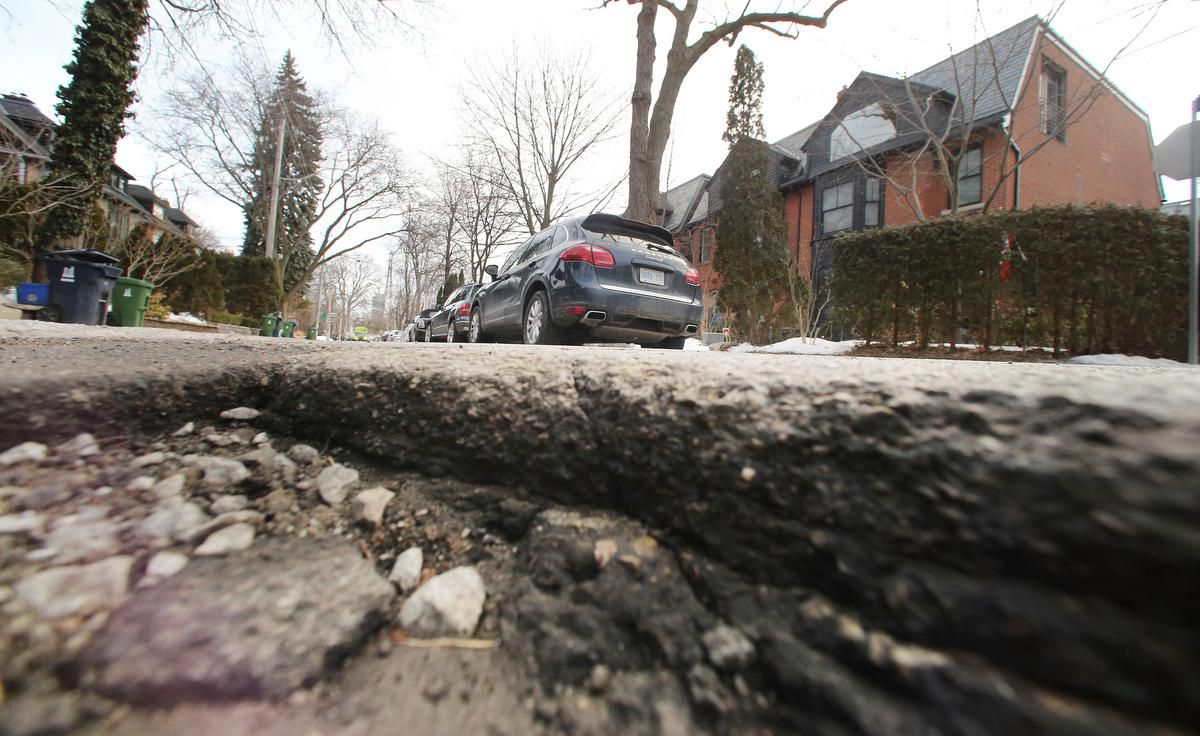 In an occasional series, the Star delves into 311 data to see what our concerns say about the city. In this fourth instalment, we look at the number one complaint in Toronto: potholes.

In a land not far away, next to a castle on a hill, lies a “republic” with a whimsical approach to dealing with the city.

Last summer a massive hole that sat unfixed for months on a side street just west of Avenue Rd., steps from Casa Loma, was transformed into an impromptu community garden.

“One of the kids who lived on Poplar Plains Cres. just for a lark threw some tomato seeds into the pothole, and low and behold they started to grow,” recalls Republic of Rathnelly neighbourhood historian Pym Buitenhuis.

“Because the hole was there for so long they evolved into fully grown plants and there were hundreds of tomatoes on them.”

Rathnelly, with boundaries of Avenue Rd., Poplar Plains Cres., Poplar Plains Rd. and the CP Rail tracks, lies in Ward 12 (Toronto — St. Paul’s), which made 1,613 requests to the city’s non-emergency 311 hotline about potholes in 2018.

The Fixer: It’s been a tolerable winter for potholes — so far

Toronto is known for dead raccoons and potholes. The city’s 311 nerve centre knows this reputation is well-earned

Is this Scarborough area the noisiest neighbourhood in Toronto?

In a construction-plagued city of aging infrastructure, potholes are a constant scourge almost everywhere. Potholes were the number one complaint to 311 in 2018 with almost 20,000 service requests.

Potholes can come with a big price tag for drivers when they cause damage to cars, and they’re a danger for cyclists, leading them to fall or swerve into traffic. But they’re also costing taxpayers hundreds of thousands of dollars as the amount the city pays out on pothole damage claims has skyrocketed, from roughly $245,000 in 2015 to about $807,000 in 2018.

A 2011 city ombudsman’s report found more than 90 per cent of small claims for compensation for pothole damage, flooding from sewer backups and fallen tree limb damage were dismissed by its insurance adjuster. But in 2018, just over half of claims, 55 per cent, were paid out. As well, more drivers made claims in 2018, almost 4,000 compared to 867 in 2015.

The city says this is because of a rough winter that saw three full freeze and thaw cycles, which had a dramatic impact on potholes.

Buitenhuis believes the Rathnelly potholes are “exacerbated” because of persistent work around the High Level Pumping Station on Poplar Plains Rd, central control for the city’s water distribution system.

“If a whole waft of tomatoes was able to grow over the space of four months in a hole in the road, clearly something’s not right in the state of Denmark.”

It was a “classic” response for a community that’s long had a “tongue and cheek attitude toward anything to do with bureaucracy,” she says.

The neighbourhood was the site of a tense battle over stopping the Spadina Expressway in the 1960s. Out of that fight emerged a feisty and fierce spirit that saw it “secede” from Canada in 1967 in protest, adopting its own Queen (longtime resident Eileen Robertson, then 97), head of state (Bubbles the poodle), playful name, flag and coat of arms.

The coat of arms now graces street signs in the small but mighty Republic of Rathnelly. Its red brick two- and three-storey homes give it a stately air even on a wet, grey Sunday, where three snowmen wearing bright-coloured toques preside over piles of melting slush.

There’s no sign of the epic hole, which was eventually fixed. But there are plenty of puddles, cracks in the road and black asphalt markings that show past repairs.

Buitenhuis’ neighbour Marnie Gold says the city has been quick to respond to her other 311 complaints, such as those regarding too-long grass in a park nearby. But it’s slower to act on her calls about potholes, she says, and the tomato plants show it.

“The city roads in general are a mess,” she says. “Look how ridiculous this is, you can have like a farm.”

City spokesperson Diala Homaidan said in an email that city crews could not find a leak or water main break in the initial Rathnelly hole so the area was backfilled with stone to monitor for any potential leak in spring 2018.

Crews returned to the site in mid-August and determined “there were fractures on the sewer main.” After repairs they completed a permanent backfill with asphalt on Aug. 18, making it fully driveable again.

Another city spokesperson, Eric Holmes, said staff are constantly working to manage the number of potholes on roadways and the resulting claims. This includes pothole-fixing “blitzes” every year as required, re-decking part of the Gardiner in 2018 and an ongoing review of materials used to fix potholes.

“Toronto has endured more freeze-thaw cycles over the past few years than what was considered usual. These cycles have had a dramatic impact on our roads and often result in an increased number of potholes,” Holmes said.

“Staff are working hard to repair as many potholes as possible, as quickly as possible.”

Jared Kolb, executive director of Cycle Toronto, says potholes are a serious concern for cyclists, as “cars have advanced shock absorption systems. Bikes do not.”

“Anytime you’re driving your car and you feel a pothole, try to imagine what that must feel like for a cyclist,” he said in an email.

They can also cause cyclists to “swerve unexpectedly” into traffic, he said, noting a backlog of funding for road repairs impacts the most vulnerable road users the most.

Potholes are just “a reality” in a place with such extreme weather and fluctuations in temperatures, says Raymond Chan, government relations specialist with Canadian Automobile Association (CAA) — South Central Ontario.

Moisture can seep into cracks in the ground, which expand when the weather changes. When cars roll over them and the pavement or concrete starts to break apart, it can cause pothole.

Toronto’s problem is “quite significant and doesn’t seem to be going away any time soon,” he says.

“The more time that you allow for that concrete to break up the more costly it’s going to get,” he says, both for the city to fix the potholes and to pay out motorists whose vehicles are damaged by them.

“We need to make this issue more of a priority than it currently is,” Chan adds.

He’s developed a special machine called the AMIR road compactor (Asphalt Multi-Integrated Roller) for paving roads. Instead of oscillating steel wheels that most rollers have, the AMIR has a rubber belt to make sure the asphalt is distributed constantly and consistently.

Steel rollers, he says, leave cracks. Water gets into those cracks, freezes and expands, making them even bigger. Eventually they become potholes.

El Halim developed the first prototype in Cairo, Egypt, where he’s from, in 1987. Since then it’s been used to pave a road in Sydney, Australia, leading from the airport to Olympic Village, he says. Closer to home, construction company Tomlinson started using it on bridge projects in 2012.

But it hasn’t quite caught on.

Instead the roads are weakened when the city merely repairs potholes, “because you’re not really solving the major problem, you’re just hiding it.”

Back in the Republic of Rathnelly, Buitenhuis understands the city is growing and that workers are doing their best.

But she feels that paving over potholes is just a “Band-Aid.” A long-term strategy to co-ordinate street work across silos in the city, and with the pothole repair crews, would have a deeper impact, she says.

At any rate, it’s a problem that’s not going away any time soon, and the city should be prepared.

“All of us have observed a general decay in the roads, and as the snow melts … the number of potholes is going to be catastrophic I think for the city,” she says.