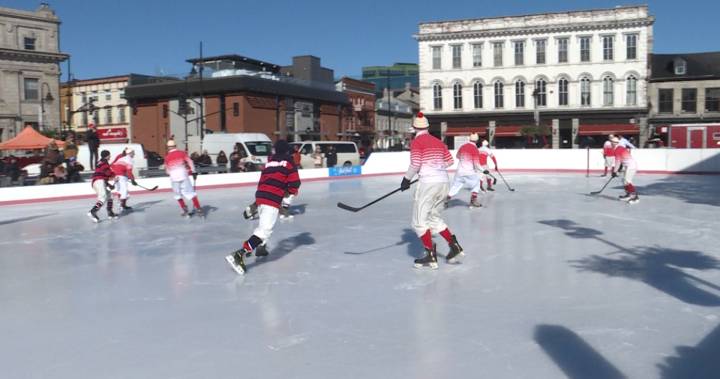 There was a time when the “hockey net” was literally wooden posts frozen in the ice and referees used bells to stop play.

The annual “Historic Hockey Series” was the premier event at Feb Fest Saturday, at Market Square in Kingston.

It is an annual tradition, a re-enactment of the first organized games on the Kingston harbour in the 1800s.

“The significance is we are trying to pay tribute to the early origins of the game,” says Mark Potter, president of the Original Hockey Hall of Fame.

The first game was between Queen’s University and the Royal Military College in 1886.

Today at Market Square, players obey the rules of the game from 133 years ago.

“Probably the biggest change from then to now is the fact that in the 1800s there was no forward passing. So it is quite much like rugby. It’s lateral passing. Passing from behind”, says Potter.

“You cannot move the puck up the ice and pass to a teammate. So it makes the game completely different. As a result, the games are quite low scoring.”

The re-enactment is a brief glimpse into how hockey got started. And how the frozen game has evolved: a history lesson on ice.

“We are really trying to show, especially to younger people today,  where the game began. What a contrast,” says Potter.

The original puck used on March 10, 1886, was square, made from a cut-down lacrosse ball. Pucks back then were often made of wood or rubber.

Long-time hockey fans had a chance to see and meet Maple Leafs legend Bobby Baun, who was there to sign autographs.

Al Smith was there adding another signature to his very dingy Maple Leafs jersey. He has collected over 120 other signatures over the years from NHL players.

“I can’t wash it. One guy asked last week ‘What do you do, change the oil with it?” Smith says laughing.

Also, a part of the event was recognizing the contribution women have made to the game.

In particular the Red Barons, the ground-breaking women’s hockey team formed in 1969. They won numerous tournaments and championships in Ontario and Quebec in the 1970s.

“The main message could be: if Kingston was not the birthplace of hockey, the game evolved and grew up here,” says Potter, “and that is the primary thing that we are trying to show people.”

And finally, a fun fact: the first and only goal scored in the 1886 game was scored by Queen’s University’s Lennox Irving.