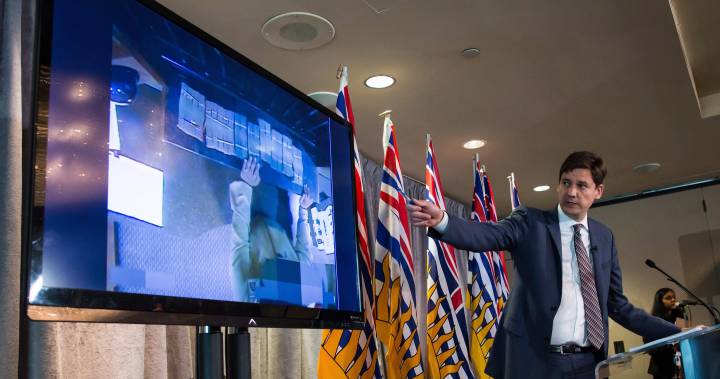 And there were serious concerns that the suspected illegal casino operators may have gotten advance warning that police were watching.

The E-Pirate raids of 11 locations, including an alleged underground bank in a Richmond office building and luxurious homes that RCMP said hosted illegal casinos, targeted a suspected organized crime loan shark named Paul King Jin and a number of Lottery Corp. high-rollers from China, according to Alderson’s notes.

Serr, who is now the chief of Abbotsford Police, said he could not comment for this story.

Alderson’s notes contain a detailed breakdown of the cash, computers, and casino equipment the RCMP say they seized in the E-Pirate raids. About $6 million in cash was seized, and three Baccarat tables, plus 7,000 decks of new cards, according to police.

And there were two illegal casinos, including a mansion on Richmond’s No. 4 Road, with “29 surveillance cameras,” and stacks of chips that could have come from Lottery Corp. casinos, according to allegations in the notes.

But the alleged casinos believed to be run by Chinese Triads appeared to have been quickly abandoned.


READ MORE:
Secret police study finds crime networks could have laundered over $1B through Vancouver homes in 2016

Global News has been unable to reach Jin directly or through his lawyer for comment on the allegations. No charges have been filed. Charges were stayed in the E-Pirate investigation, and the B.C. combined forces anti-gang and illegal gaming unit has made a number of arrests in a related investigation. Evidence is now being reviewed by B.C. crown prosecutors, and its not known whether charges will be laid.

Alderson told Serr that the Lottery Corp. was aware of the location of the alleged gaming houses and lists of Chinese VIPs believed to be connected to Jin, his notes say. BCLC also knew high levels of B.C.’s government had been briefed, according to Alderson’s notes.

Alderson’s notes said that he and Serr “agreed that a lot of people had inside knowledge of this operation but reiterated no one (to my knowledge knew of any dates of the operation).”

“I talked about concerns that (BCLC’s) gaming expertise may not be utilized through cutting BCLC out,” Alderson’s notes on the call with Serr, concluded. “Assured him that BCLC did not know dates of operation.”

But sources with knowledge of the perspectives of GPEB and RCMP investigators, said that GPEB investigators had joined a special task-force in the spring of 2015 and accompanied RCMP on the E-Pirate raids in October. And the B.C. gaming regulator investigators later openly complained that the raids had been compromised.

According to Alderson’s notes, even before the compromised E-Pirate raids, he had learned by September 2015 that senior police in B.C. and GPEB investigators were losing trust in the Lottery Corp.

But back in February 2015, according to Alderson’s records, the Lottery Corp. and RCMP apparently had agreed to share information for a targeted probe of Jin.

On Feb. 12 at the Lottery Corp.’s head office in Vancouver: “BCLC met with RCMP (federal serious and organized crime) to lodge a complaint (of) cash drop offs at Casinos involving a male by the name of Paul ‘King’ JIN who was believed to be associated to organized crime,” a report filed by Alderson says. Alderson told Serr that the Lottery Corp. was aware of the location of the gaming houses and lists of Chinese VIPs believed to be connected to Jin, his notes say.

On July 20 and 22, Alderson had discussions on the Jin file with senior RCMP officer Calvin Chrustie. A report from Alderson says that Chrustie advised him of investigations into underground banking at an alleged Richmond “cash house” as well as probes of gamblers in Lottery Corp. and illegal casinos.

The RCMP had “uncovered that potentially some of the funds at the cash house were linked to transnational drug trafficking and terrorist financing,” Alderson’s report says.

Alderson’s records say that in the following days, officials including Lottery Corp. executives, and high-level officials in B.C.’s government were briefed on the bombshell information.


READ MORE:
A B.C. money laundering public inquiry is backed by every demographic that was asked in this Ipsos poll

But for some reason, information sharing with the Lottery Corp. had gone sour by September 2015, according to a report filed that month by Alderson.

In his September 2015 report, Alderson wrote he had “received information that senior police had directed their operational staff to deal with GPEB rather than BCLC. Comments were made that there had been unwillingness by BCLC leadership to address, what was in the police’s eyes, clear acceptance of huge volumes of cash which ‘one could reasonably suspect were likely proceeds of crime.’”

In response, BCLC said that it takes money laundering seriously, and that in advance of E-Pirate, from late 2014 through February 2015 BCLC asked the RCMP to investigate suspected loan sharks.

BCLC stated: “a senior official of the RCMP advised that while BCLC should continue to share information with the RCMP and complete suspicious transaction reports, that official also cautioned BCLC not to take any other action without first discussing it with the RCMP’s Federal Serious and Organized Crime, ‘so as not to impede any ongoing criminal investigation.’”

While Serr is not with the RCMP, court filings show that throughout 2015, RCMP’s FSOC and Vancouver police had overlapping drug-trafficking and casino money laundering probes focused on a transnational Chinese gang connected to a massive alleged underground bank in Richmond with suspected links to Latin American and Middle East drug traffickers.

It’s a snow day! All TDSB and TCDSB schools closed in Toronto

Mounties dial back warnings about dangers of fentanyl exposure for police