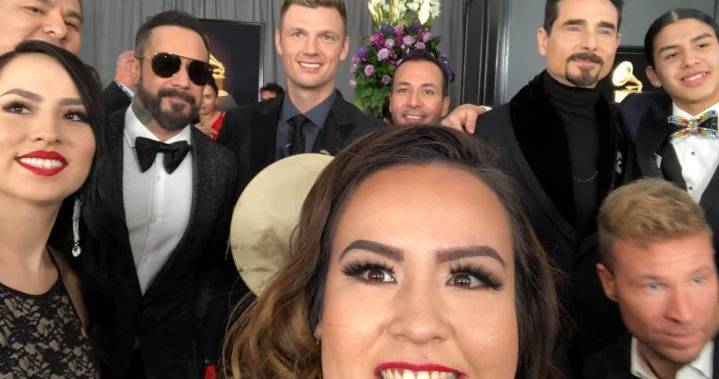 A pair of Saskatoon musicians have returned from a Grammys experience that included selfies with the Backstreet Boys and a limousine ride booked by Jessica Alba and Gabrielle Union.

In 2001, Jacob Faithful co-founded a group called Young Spirit, which included members of the Frog Lake First Nation. Its 16 members now come from across Western Canada and parts of the United States.


READ MORE:
Alberta-founded collective Young Spirit to bring 10 of its members to Grammys

The group’s goal is to empower young people through traditional Indigenous drumming and singing, Faithful said, but they never imagined they would make it to Music’s Biggest Night.

“All we wanted to do was send a message out there and be part of something great,” Faithful said.

Faithful was shocked to learn of the band’s nomination, as was his 16-year-old son and band mate, Jarron Gadwa. Both are from Frog Lake, but live in Saskatoon.

“Three weeks ago, I was writing my Grade 11 finals and to know that I’m going to the Grammys, is honestly, crazy,” Gadwa said.

Young Spirit made its Grammys debut Sunday, after the band’s album “Mewasinsational – Cree Round Dance Songs” was nominated in best regional roots category.

Another artist took the award, but Young Spirit had an unforgettable experience, including being driven to their hotel in a Rolls Royce limo arranged by actresses Alba and Union.

“They actually made a cake for us and it had the album cover of our nominated CD,” Gadwa said.

Reaching the Staples Center in Los Angeles, the group walked the same red carpet as the likes of Drake, Lady Gaga and Dolly Parton.

“I thought it was pretty cool when the Backstreet Boys came up to us and asked to have a picture and [that we were part of their playlists on their phones,” Faithful said.

In a rare occurrence, officials with the Grammys arranged for Young Spirit to perform on the red carpet.

As the drums came out, the commotion of media interviews came to a stop.

“All the cameras turned toward us. It was pretty neat to see these famous musicians taking out their phones and trying to record us singing,” Faithful said.

One organizer said it was the first time she’d seen a red carpet performance like that in her 18 years of experience, Faithful recalled.

“Thank you so much for doing that for us. You just changed the vibe of the whole red carpet,” he recalled the woman saying.

Seeing Cree round dance music on the international stage shows the “significant gift” that First Nations people have to offer, according to Tribal Chief Mark Arcand of the Saskatoon Tribal Council.

“It really provides … role models for our younger people to get our language and culture back. People flock to it,” Arcand said.

Young Spirit’s next album is set to be released in April.

“If we end up at the Grammy Awards next year, sure,” Faithful said with a shrug.

“But if we don’t, then you know what? We had an awesome time.”

Doug Ford bogged down our subway, but he could yet lead the way to the TTC’s ‘better way’