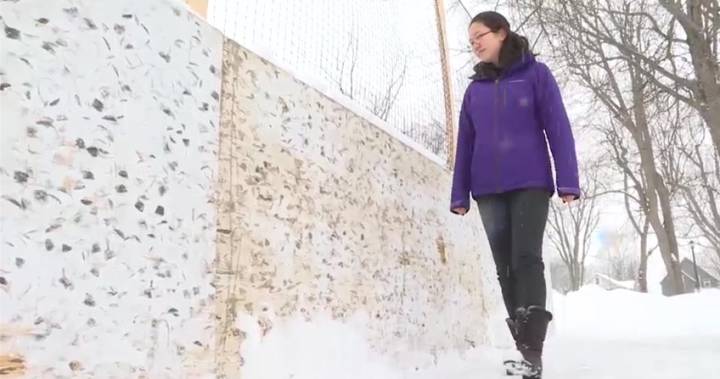 The first of many festivals in 2019 at McBurney Park in Kingston was slated for the second weekend of February.

The Skeleton Park Arts Festival attracts poets from around the area for a day filled with written and read pottery and skating on the outdoor rink. This year, a poem written by a local grade 11 student, Olivia Ows, was chosen to be the centrepiece of the festivities. The boards for the rink were created with the teenager’s poem printed on each one that surrounded the ice.

Two days before the festival kicked off, though, the boards were found destroyed.

“I was walking with my son through the park and I was shocked [by] what I saw,” said Greg Tilson, artistic director for the Skeleton Park Arts Festival.

“Olivia’s rink boards were torn apart, and after speaking with the organizers, we decided to cancel the event.”

In an attempt to remain positive about the situation, Ows told Global News that she is trying to look at this incident with a glass-half-full approach.

“When my poem was selected for the project, I was elated, and when I seen the finished rink with my poem ‘Sunrise on Ice’ built into the boards, I was speechless,” said Ows, who feels that this act has wasted people’s time and money.

The poetry festival was intended to showcase local talent, with Ows’ work being honoured along with previous winners.

Ows’ piece was a response to last year’s winning poem, “Night skaters, Skeleton Park,” by Steven Heighton. Ows says Heighton’s piece inspired her to build on his poem, which was about outdoor hockey during the daytime hours, by focusing on what takes place on the ice during the night hours when the park is calm.

According to Tilson, the celebration is being put on hold for the next few weeks until the premiere of the Kingston poetry documentary, Who is Bruce Kauffman?,  where the organizers will honour Ows ahead of the screening.

Ontario’s deficit forecast drops $1 billion for the year to $13.5 billion