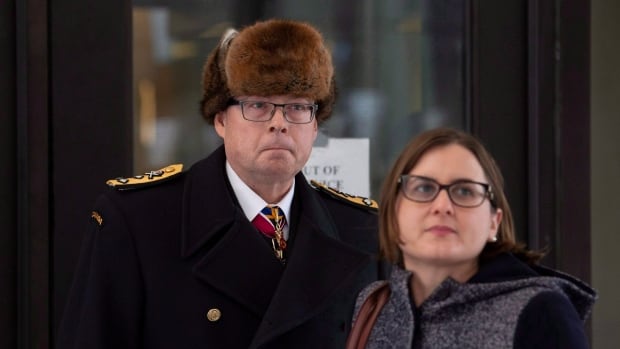 The top lawyer at the Privy Council Office apparently asked federal prosecutors if it was possible to « engineer the issues at stake » in the criminal case against Vice-Admiral Mark Norman.

The remarks — made on Sept. 18, 2018 and attributed to PCO lawyer Paul Shuttle — were contained in prosecution notes entered into evidence at a pretrial hearing involving the former vice-chief of the defence staff, who faces one count of breach of trust.

Justice Heather Perkins-McVey made reference to them on Friday as the Crown attempted to explain why it redacted notes being sought by Norman’s defence team.

The judge acknowledged there is a lot background missing from the reference.

« You wonder what that is about, » said Perkins-McVey. « We don’t know the context, what they were speaking about. »

Defence attorney Christine Mainville agreed and suggested she wasn’t prepared to jump to conclusions either, saying a lot of references in both the censored and uncensored versions of the notes « remain ambiguous. »

But she also noted during Friday’s pretrial hearing that notes of meetings between the Crown and officials at the Privy Council Office, which reports directly to the Prime Minister’s Office and cabinet, will be important to the defence when it moves at the end of March to have the charges against Norman dismissed.

Whether the ‘engineering’ reference will help the defence remains to be seen.

Earlier this week, the lead Crown lawyer, Barbara Mercier, stated in an email to the defence that the notes were redacted for « litigation privilege » because they involve discussions of « trial strategy. » That prompted defence lawyers to allege political interference on Monday.

The director of the prosecution service denied the claim of interference in a written statement this week. That point was reinforced by Crown lawyer John MacFarlane in court Friday.

As he spoke, Justice Perkins-McVey flipped through the uncensored version of the meeting notes and asked, « What about comments from Paul Shuttle, like, ‘Is there a way to engineer the issues at stake?' »

MacFarlane insisted the meetings were meant to identify a potential witness who could speak to the issue of cabinet confidences. Norman is accused of leaking cabinet secrets related to a $668 million shipbuilding deal to lease a supply ship for the navy in 2015.

The judge seemed skeptical of that explanation.

« There was certainly a discussion of evidence, » said Perkins-McVey, referring to the notes but not quoting further from them. « There was discussion of the evidence-gathering process. Obviously this was done well before. »

Norman does not go to trial until August. His lawyers have been arguing in court for months over access to federal government documents, including secret cabinet memos and notes related to the prosecution.

The Crown has fought most of the requests, claiming they are not relevant to the charge that the former commander of the navy leaked sensitive cabinet information both to executives at both the Davie shipyard in Levis, Que., and to CBC journalist James Cudmore.