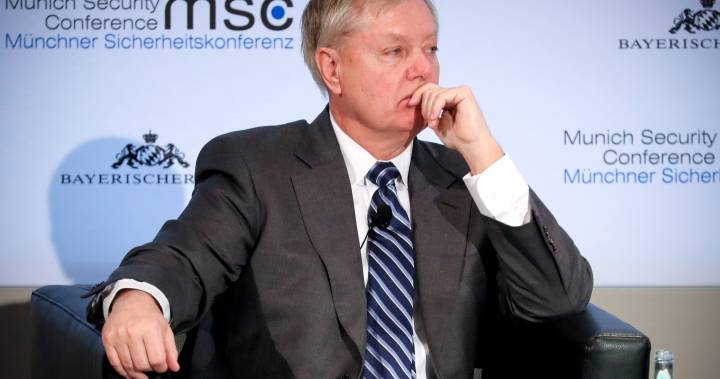 U.S. Sen. Lindsey Graham said Friday the response by the United States to China detaining two Canadians in apparent retaliation for the arrest of a Chinese Huawei executive has not been strong enough.

“The president has been tough on China but this is one area where I think we need to make a more definitive statement, because the two people arrested in China had nothing to do with the rule of law. It was just grabbing two Canadians,” Graham said.

Foreign Affairs Minister Chrystia Freeland, who appeared on the panel with Graham, mouthed the words “thank you” to Graham after he said it. Roland Paris, one of the delegates and a former foreign policy adviser to Prime Minister Justin Trudeau, asked Graham about it.

WATCH: Pompeo says U.S. might scale back operations with countries that are doing business with Huawei

U.S. ambassador to Canada Kelly Craft said last Saturday her country is “deeply concerned” about China’s “unlawful” detention of the two Canadians in what was her first public comments on the cases since China detained them on Dec. 10 in an apparent attempt to pressure Canada to release Chinese executive Meng Wanzhou, who was arrested Dec. 1 at the request of U.S. authorities.

Meng is the chief financial officer of the Chinese tech giant Huawei and the daughter of its founder. The U.S. wants her extradited to face charges that she committed fraud by misleading banks about Huawei’s business dealings in Iran.

China also re-sentenced a convicted Canadian drug smuggler, Robert Schellenberg, to death after the Meng arrest as part of an apparent campaign of intimidation and retribution against Canada.


READ MORE:
Analysis: China pulling out all the stops to force Canada to back down

Some analysts have said the U.S. response to China’s arrests of the two Canadians has been muted. U.S. President Donald Trump himself has not commented on the Canadians. But U.S. Secretary of State Mike Pompeo has, saying China ought to release them. White House spokeswoman Sarah Sanders and the State Department have issued brief statements of support.

Canada has embarked on a campaign with allies to win the release of Kovrig and Spavor, and many countries have issued statements in support.

“These are human beings and they only thing they did was be Canadian in China,” Freeland said. Freeland said she would be grateful if more countries spoke out.

“We will all be stronger and safer if we all can do that for each other,” she said. “We can’t descend to a might-makes-right world and that’s especially essentially for middle powers.”

The two Canadians were detained on vague allegations of “engaging in activities that endanger the national security” of China. They remain locked up without access to lawyers.

Meng is out on bail in Canada and awaiting extradition proceedings.

News of a warmer spring will warm weary, frozen Torontonians