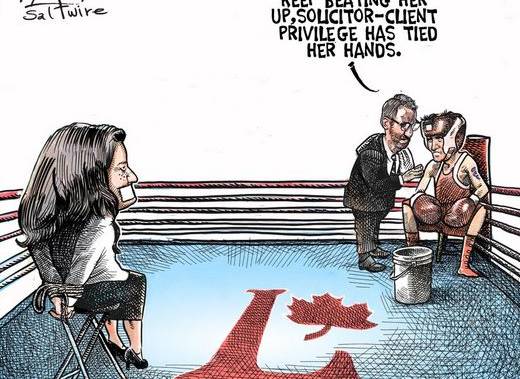 A popular Halifax political cartoonist says he will “strive to do better” after one his cartoons, depicting the SNC-Lavalin controversy, caused an uproar on social media.

“Cartoonists sometimes have unanticipated secondary interpretations in cartoons that they don’t intend,” wrote Michael de Adder in a series of tweets on Saturday evening.

“I assure people who have supported over the course of my career that I’m not tone deaf to concerns about this cartoon.”

The cartoon at the centre of the controversy shows former justice minister Jody Wilson-Raybould and Prime Minister Justin Trudeau on opposite sides of a boxing ring. Trudeau is being advised to “keep beating her up, solicitor-client privilege has tied her hands.”

But what had people most upset was the depiction of Wilson-Raybould tied and gagged — with some saying it draws an ugly parallel to violence against women and Indigenous women in particular.

“I’m a fan of Michael de Adder, but violence against women should be off-limits. Simple as that,” Bernard told Global News.

“Add in the context of Jody … being an Indigenous woman. There’s a sensitivity around missing and murdered Indigenous women in this country that is completely unacceptable to make jest of in any way, shape or form.”

Wilson-Raybould resigned from her position as minister of veterans affairs following a Globe and Mail article that alleged Trudeau’s aides pressured her to cut a deal to save SNC-Lavalin from criminal prosecution.

Life is learning from your mistakes and I made a mistake. When I make a mistake everybody knows about it. I cant t… twitter.com/i/web/status/1…

de Adder says he will not stop drawing the cartoons related to the SNC-Lavalin controversy, but says that he did not intend to “offend women, make light of domestic violence or trivialize indigenous issues.”

“I am human, I make mistakes, I will strive to do better.”

Noting that the backlash prompted “a lot of self-reflection,” de Adder said that he will no longer depict women in violent situations going forward.

Hamilton, Ont. cartoonist Graeme MacKay, meanwhile, released a nearly identical cartoon of Trudeau and Wilson-Raybould inside a boxing ring together, with the former justice minister tied and gagged while the prime minister holds his arms up in victory. MacKay’s cartoon shows Wilson-Raybould on the ground with a ball and chain around her feet reading “solicitor-client privilege.”

MacKay’s cartoon was also ridiculed, with social media users saying violence against women should be vetoed when it comes to political satire.

Bernard told Global News that this type of political satire sheds light on a different type of issue.

“He could have got his point across in various other ways. But then you add the contextual piece of Indigenous women in this country who overwhelmingly represent missing and murdered females in the country, it really added insult to injury and I think he’s way off base on this,” Bernard said.

‘I felt helpless’: Teachers call for support amid ‘escalating crisis’ of classroom violence

Quebecers stranded by Haiti protests arrive back in Montreal