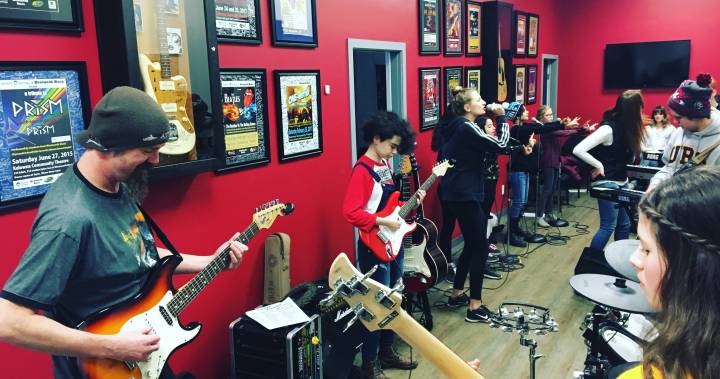 Rehearsals are underway for one of Kelowna’s biggest rock concerts of the year.

But the performers are not rock stars: They’re students.

“We’re putting on a tribute to our fallen heroes,” said Noel Wentworth, vice president of education at Wentworth Music. “It’s a musical celebration, so people like Prince and David Bowie and Michael Jackson.”

Wentworth, the largest music school per capita in Canada, has been hosting these rockin’ recitals twice a year for over a decade and it’s their 25th recital this time around.

“We’ve received international attention. We’re doing something that very few other schools are doing,” Wentworth said. “I get people on a regular basis saying ‘this is a really good show.’ The seven o’clock show usually sells out.”

The music school has over a thousand students –- anywhere from six years of age to 76 — with many performing at the recital.

“I’m nervous but I’m excited because, apparently, a lot of people come to watch it,” said piano student Emily Fortin.

Fortin is new to Wentworth and this is her first rock concert performance.

“If you want to pursue music, you have a lot of open doors for you instead of just taking at-home lesson,” Fortin said.

And from newbie to veteran, Reece Wernicke has been with the school since he was three years old and has performed in 23 of the 25 recitals.

“It’s really evolved and it’s gotten so much bigger,” Wernicke said. “It’s just a really exciting thing that I get to do twice a year and it’s something I look forward to.”

The concert is a fundraiser, with all proceeds going to support youth.

“We’ve raised over $212,000 now for the Kelowna General Hospital to help children,” Wentworth said. “We’re making a difference in people’s lives by doing something that we love to do.”

Watching these students perform, it’s difficult to believe many of them are beginner musicians.

“I love seeing students succeed,” Wentworth said. “I love seeing them go from square one, and the process of them stumbling and learning, and then, by the time we get to do the show, they’re nailing it. That’s what it’s about.”

The Legacy – A Musical Celebration of Our Lost Legends concert takes on Feb. 23 at 2 p.m. and 7 p.m. at the Kelowna Community Theatre.

Tickets are available on Eventbrite but they are selling out quickly, especially for the evening show.