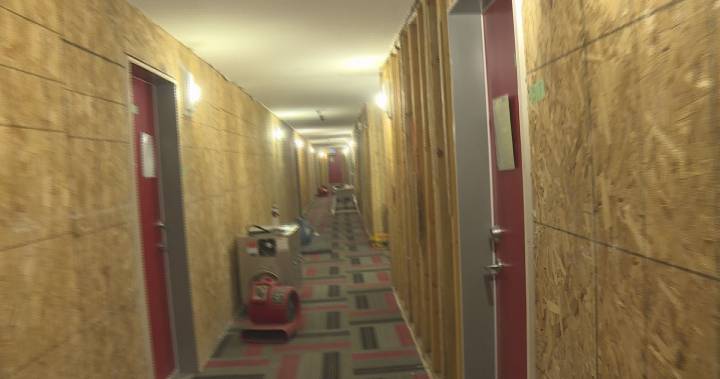 A sprinkler pipe burst on the top floor of a relatively new condo building at UBC Okanagan, resulting in flooding throughout four floors.

“The fire alarm turned on. I didn’t know exactly what happened, so I looked out my eyehole and I just saw water near the elevator shaft,” UBCO student Sayhanyo Saha said.

“The water was all the way to the ground and then we were taking our brooms with a bunch of other people who were living on the floor and [sweeping] the water down the stairs that way,” said UBCO student Sahej Mangat.

The flood happened late at night on Feb. 4, during the cold snap.

“There was nobody around, so there was a lot of water for a long time before somebody could turn it off,” suite owner David Green said.

“When it very first happened, it was like walking into a sauna. It was terrible,” said Donna Craig, who manages several properties within the building.

Students have since been told they have to move out by next week.

The U-Two building was recently constructed by Mission Group in 2016. It houses 112 condos and everybody has to leave.

“Right now they say that there’s a lot of moisture content in the walls. That’s why everyone’s going to have to leave: because of the mould issue,” Saha said.

“A lot of people are frustrated.”

Craig said she had 21 students in the building, and she’s still trying to help some of them find a new place to live.

“But it’s difficult. Some of the kids are having to split up, so they’re having to bunk in with other kids, and I think that’s going to be a scenario that happens a lot here,” Craig said.

“They’re going to have to be couch surfing for a bit.”

More than 100 students are scrambling to find new homes in Kelowna’s expensive rental market, which has a notoriously low vacancy rate.

To make matters worse, students are being forced to deal with the flooding and moving during midterms.

Craig said she’d been told that it would be six to eight months until tenants would be allowed to live in the building again.

“We may not even get possession back for September, which will be devastating for the owners,” she said.

‘A child is so innocent’: Candlelight vigil held for 11-year-old girl in Ontario Amber Alert