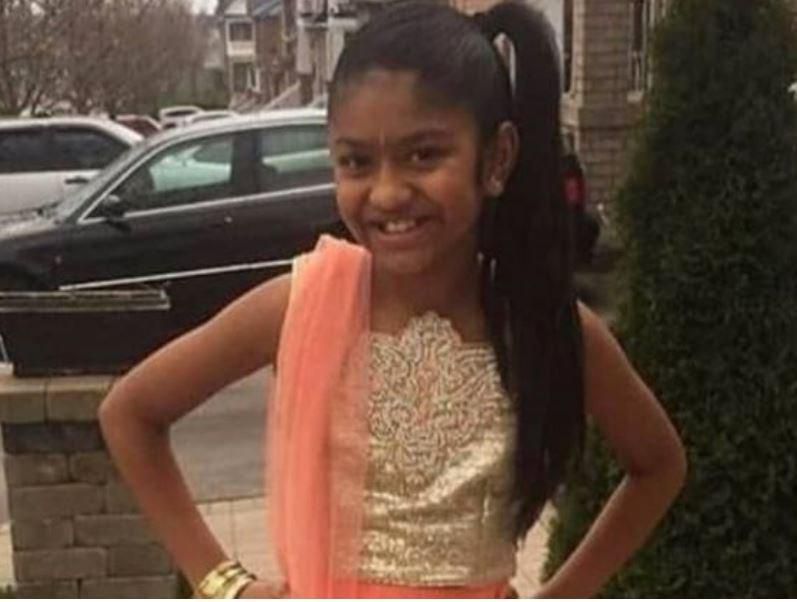 As police hunted late last Thursday night and into the morning for an 11-year-old Mississauga girl gone missing and later found dead, many people expressed shock. They said the Amber Alert for missing children, first sent out on phones at 11:30 p.m. was scary, too loud, not useful, annoying, broke their phone, woke the kids, woke the dog, and would make them tired for work.

The child, Riya Rajkumar, was a happy girl with a huge grin. In the police-issued photo of her with her father, Roopesh Rajkumar, she is proudly wearing Minnie Mouse ears and a pink purse with the letter R. She was in Grade 5. She was four feet tall.

Her mother had called the police, saying she had left the girl with her father for her birthday and was frantic about her safety after she didn’t return. The alert, normally sent out on mobile screens, TV, and radio, described her and the car she might be in, asking everyone to be on the lookout.

The alert named the father, found in Orillia and later charged with first-degree murder, and said the car was last seen eastbound on Highway 401. Peel Region police say a 911 tipoff led them to it and the Brampton house where Riya was found. They said they were distressed by the number of angry 911 complaints they received about the Amber Alert itself.

This is new to me, although perhaps not to police across Canada. 911 is reserved for emergencies. For complaints about noise, Torontonians are asked to call 311. The idea that people would clog 911 to harangue operators, possibly as the child herself was crying or even dying, seems unreal. Many tweets were foul, and not anonymous either.

“How many houses were disrupted every two hours all night long for a BS Amber Alert?” is an unacceptable tweet, but it appears to have been deleted so it’s forgivable (as are almost all tweets). What’s less forgivable is that the question was prefaced by “I am very sorry that a little girl is dead but on the night the rest of the world has to work …”

One would have thought that the final alert announcing that Riya had been found dead would have silenced the complaints. It did not.

Canadians talk about the Ottawa bubble, but it’s real. Imagine people there complaining that the child was missing in Peel Region, “which is hours away” from Ottawa, to which no human being could possibly drive in the middle of the night.

This is a test — and the nation-wide Canadian emergency alert system will be tested again and again — and the challenge is understanding the thinking behind the complaints. Calling 911 is like signing your name.

Were they drunk? Tone-deaf? Racist? Caught in an era of rage?

It may turn out that the alert was not handled perfectly but it was sincere. Yes, the digital buzzing siren sound is alarming but it’s supposed to be. It will tell you about approaching terror like hurricanes, huge fires, floods or all three.

As weather grows more extreme, you may hear it again. The practical answer is to turn off your phone or lower the volume.

By the way, it was an excellent alert, its words fresh, concise and to the point. Such alerts are by definition a shared experience, something we Canadians don’t have often. They’re directed at everyone who might help by looking out the bedroom window in the dark, checking the licence plate of the car ahead, and studying the faces of strangers.

They’re a collective effort to find an individual. In 1985, little Nicole Morin, 8, left her family apartment to meet a friend for swimming. She was never seen again. Neither her killer nor her body were ever found.

If memory serves, police asked everyone in Toronto to check their surroundings, every car trunk, every inch of yards and garages, behind sealed doors, under objects and inside bins. Nicole was so small that she could have been hidden almost anywhere and no one would have noticed. That was 34 years ago and I still think of her.

Trucking in meth: How smugglers sneak the destructive drug into Winnipeg

All eyes turn to tiny P.E.I. as electoral reform put to voters