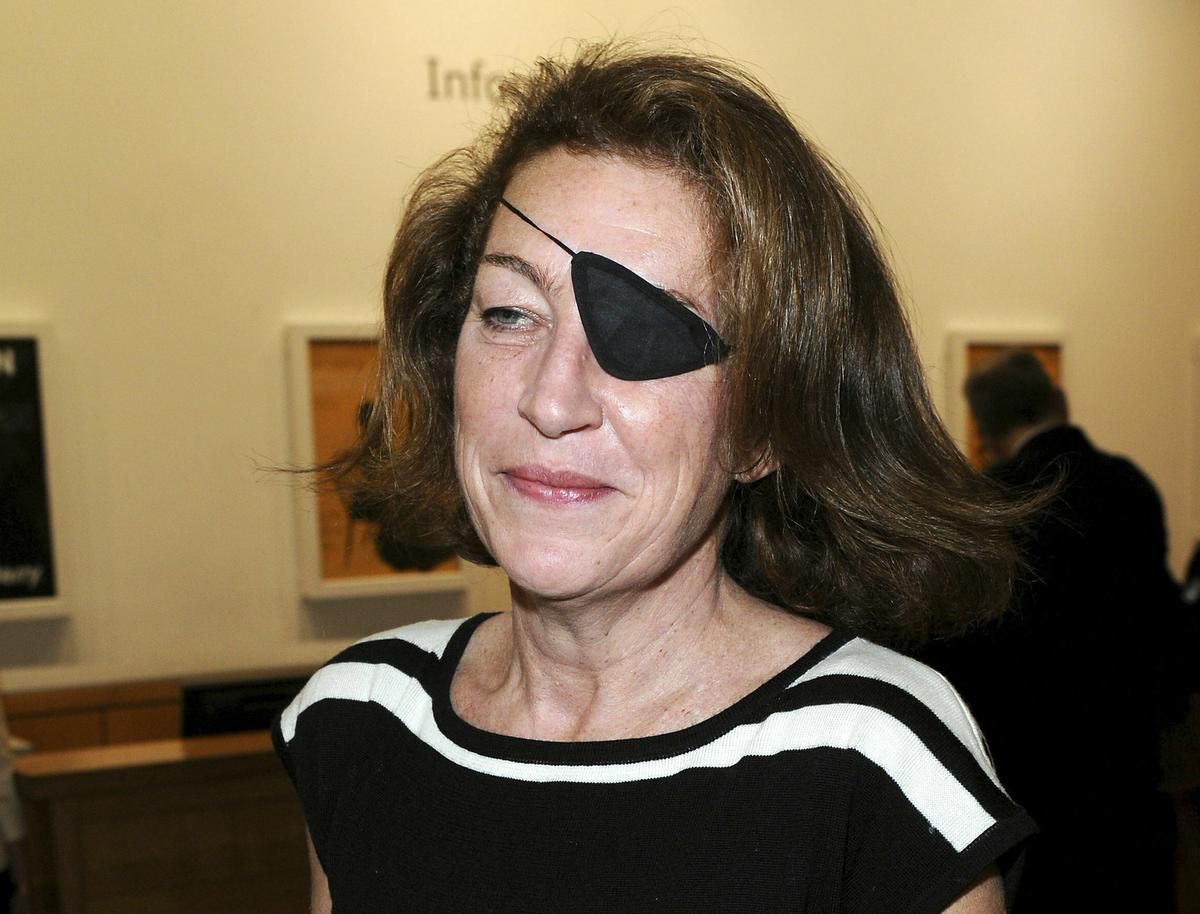 Marie Colvin is the journalist I wish I could have been.

Utterly fearless, stubbornly rebellious, committed to recording the suffering of civilians in conflict zones. And God she had style: Always wore La Perla lingerie underneath her combat fatigues.

Hard-drinking, chain-smoking, swore like a sailor. But wrote beautifully.

Yet here I am, on a Sunday afternoon in Toronto, in front of a keyboard. And Colvin is . . . a dead legend.

Targeted and murdered amidst the ruins of Homs seven years ago by the Bashar Assad regime after crawling through an abandoned storm drain below the city, intent on putting the lie to assertions that Syrian forces weren’t indiscriminately bombarding civilians.

“Officials at the highest level of the Syrian government carefully planned and executed the artillery assault on the Baba Amr media centre for the specific purpose of killing the journalist inside.

“A targeted murder of an American citizen, whose courageous work was not only important, but vital to our understanding of war zones and of wars generally, is outrageous.’’

Investigators assembled their lawsuit from interviews with witnesses who’d fled Homs and defecting Syrian officials who provided a trove of internal government documents. The Centre for Justice and Accountability, which helped to fund the case, noted it was a landmark ruling, first time the Assad regime had been held legally responsible for war crimes.

Early on the day that she was killed, Feb. 22, 2012, Colvin had emailed her editor: “No other Brits here. Have heard that Spencer and Chulov of the Torygraph’’ — what “Private Eye’’ dubbed The Telegraph — “and Guardian trying to make it here but so far we have leapfrogged ahead of them. Heavy shelling this morning.’’

Relentlessly competitive, you see. Get the story first, eyes-on. Never could resist a front line. Even as she railed against what the profession was becoming during a merciless war left largely to civilian journalists uploading videos because Assad had banned reporters from entering the country.

“How do I keep my craft alive in a world that doesn’t value it?’’ she told a close friend, as recounted by Marie Brenner in a Vanity Fair article three months after Colvin was killed.

“I feel like I am the last reporter in the YouTube world. I am inept with technology.’’

Colvin had snuck over the border with photographer Paul Conroy. She’d heard, while in transit (in Beirut) that the army was under orders to kill journalists. That didn’t dissuade her.

It may be that, by turning on her satellite phone to communicate with the office and send her dispatches, Colvin inadvertently led the regime to pinpoint her location — a two-room makeshift media centre in a building where the top floors had been sheared off by shelling. The bombing was a direct hit, killing Colvin and esteemed French photographer Remi Ochlik instantly, Conroy severely wounded.

Was it worth it, taking such risks? Colvin posed that question rhetorically at a 2010 church service honouring reporters killed in killing zones. “We always have to ask ourselves whether the level of risk is worth the story. What is bravery and what is bravado?”

But Colvin couldn’t abide any other way of doing her job, despite having a “bad feeling” as she left for her final reporting assignment, against the advice of colleagues and humanitarian agencies monitoring the carnage in Syria.

Twice-divorced Colvin also sent an email to her lover at the time.

“My darling, I have come back in to Baba Amr, the besieged neighbourhood of Homs, and am now freezing in my hovel with no windows. I just thought, I cannot cover the modern day Srebrenica from the suburbs. You would have laughed. I had to climb over two stone walls tonight, and had trouble with the second (six feet) so a rebel made a cat’s cradle of his two hands and said, ‘Step here and I will give you a lift up.’ Except he thought I was much heavier than I am, so when he ‘lifted’ my foot, he launched me right over the wall and I landed on my head in the mud! . . . I will do one more week here, and then leave. Every day is a horror. I think of you all the time, and I miss you.’’

Colvin, a Yale graduate who made her bones on Fleet Street, was a highly complex person, driven by a yearning for truth, the thrill of the scoop and the adrenalin rush of danger. She suffered from PTSD — the real thing, not the lazy diagnosis so common today but the psychosis of witnessing more slaughter than most soldiers — and panic attacks and alcoholism.

At age 56, long in the tooth for a combat correspondent, Colvin could have slowed down, mentored younger colleagues — always generous-hearted. Instead, she kept on going, pushing herself even harder. She’d survived aerial bombings in Chechnya and a daring escape over a 12,000-foot mountain range, spent nine weeks sleeping on a medical clinic floor during the siege of Misurata, stayed behind in East Timor to help fleeing civilians, raced across the “Green Line” in West Beirut in the midst of the Lebanon-PLO conflict, under fire, to report from inside a refugee camp, and fended off the advances of Moammar Gadhafi during an exclusive interview.

I crossed paths with Colvin in East Timor in 1999 — she still had two eyes back then, later losing the left one when struck by shrapnel from a rocket-launched grenade in Sri Lanka while embedded with the Tamil Tigers, ever-after wearing a black eye patch that only furthered her rakish repute — and in Afghanistan and in Libya and in Iraq, where she infamously fell asleep with her sat phone still on, racking up a $37,000 bill. That only burnished her bona fides.

It is unlikely the Colvin family will ever see a penny of the awarded multi-millions — which her sister says would be put toward a memorial foundation. But, even symbolically, with Assad now the clear victor in the Syrian war, having crushed the rebels — at least 400,000 killed — the judgment resonates.

The Committee to Protect Journalists identified 54 journalists who died violently last year alone, 34 of them murdered in direct retaliation for their work, from Mexico to Yemen, more than a dozen in Afghanistan, which remains the most dangerous place on earth for correspondents. Reporters Without Borders puts the figure at 80, if citizen journalists and other media employees are included. None died more gruesomely than author and Washington Post columnist Jamal Khashoggi, assassinated and dismembered inside the Saudi consulate in Istanbul.

Khashoggi, Colvin and Austin Tice — a former U.S. marine turned freelance reporter who disappeared in Syria after being kidnapped in 2012 — were honoured in a 60-second commercial broadcast during the Super Bowl, paid for by the Washington Post and narrated by Tom Hanks. Afterwards, Donald Trump Jr., tweeted that media could avoid paying millions for a commercial to “gain some undeserved credibility . . . how about report the news and not their leftist BS for a change.’’ Because repugnant behaviour runs in the family.

Colvin’s adventurous life has been told in documentaries and books and in A Private War, a movie released last month, based on Marie Brenner’s article, with Rosamund Pike delivering a ferocious performance as the heroic and deeply traumatized journalist, with all her physical and emotional scars. But none of it can hold a candle to the blood-and-flesh woman she was.

The Star doesn’t cover wars anymore. Too costly and few reporters willing to go anyway. Easier, sadly, to just piggyback on the Washington Post and the New York Times. And maybe the data metrics show no significant audience for it. I hate news judgment in thrall to readership analytics.

Colvin’s own words, spoken when she accepted an award for her work in Sri Lanka, provide the most poignant epitaph for the greatest war correspondent of our era.

“Bravery is not being afraid to be afraid.”