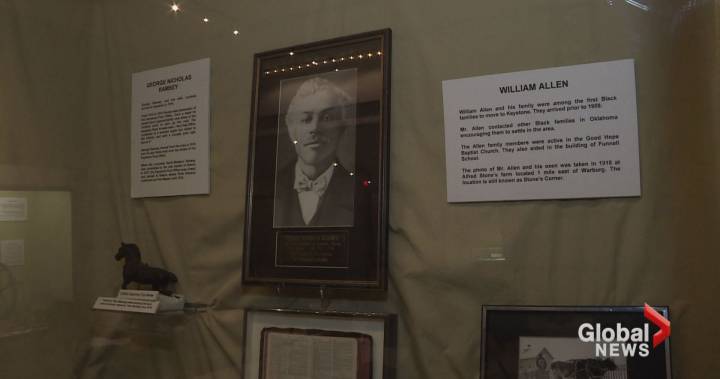 Long before the province officially recognized Black History Month, the tiny village of Breton in north-central Alberta had been commemorating and honouring the African American immigrants who helped settle the area.

“It started out as very low-key, very humble beginnings with the local tea here at the museum,” said Breton and District Historical Museum curator and manager, Allan Goddard. “At that time, we still had a number of the first generation family members that were still alive.”

Alberta officially recognized Black History Month for the first time in 2017 but the folks in Breton have been celebrating their founding families annually since the mid-90s — around the same time the federal government began recognizing it.

Every February the museum holds a special event to commemorate those who helped settle the area which was originally known as Keystone.

At this year’s event, 89-year-old Vant Hayes, who was born in Keystone, shared stories of his and his family’s life in the area.

“My parents came at the turn of the century,” Hayes said. “We lived in a log house and I’m not kidding you, the weather we had a day or two here, we get up in the morning and the water in the pail would be frozen.”

Hayes’ family was one of 52 that immigrated to the area at around the same time. Many, like his parents, were fleeing areas in the southern United States where state and local racial segregation were being enforced and violence was escalating.

“The African American settlers who founded Keystone in 1910, 1911 — they were leaving some very harsh conditions in primarily Oklahoma but some other states too,” Goddard said.

“At that time period, the Jim Crow laws were in effect and [immigrants] looked northward to Canada,” Goddard said. “Supposedly all homestead land was available and conditions of more tolerance.”

Hayes didn’t provide details but alluded to stories he was told of violence his parents experienced in both Mississippi and Oklahoma.

While the family wasn’t completely free from racism once they arrived in Alberta, Hayes beamed when he talked about how his family was one of the first to help settle the area.

His sentiment is echoed by others whose families also helped settle other parts of Alberta.

“Our people did come up in the early 1900s to help settle the Prairie provinces so we are a part of the development of Alberta and Saskatchewan, so it’s important that the roots are told,” said Deborah Dobbins, whose family settled in the Wildwoods area of Alberta.

If there’s a labour shortage, how come some people are still out of work?