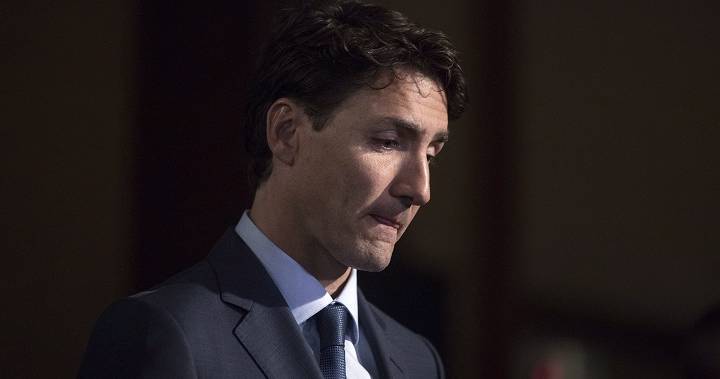 The Trudeau government is leaking political support in the wake of the resignation of its former justice minister, making its chances of re-election this fall far less certain than they seemed to be at year’s end, according to a new poll provided exclusively to Global News.

“This is the worst couple of weeks the PM has had since the India trip,” said Darrell Bricker, CEO of polling firm Ipsos. “The biggest problem is that it hits at what gives the Liberal Party its appeal: the prime minister.”


READ MORE:
Charges against SNC-Lavalin explained — and how the PMO allegedly got involved

Ipsos was in the field last week, after revelations surfaced that, last fall, while she was justice minister, Jody Wilson-Raybould felt that unnamed individuals in the prime minister’s office were pressuring her to intervene in a criminal court case in favour of Quebec-based engineering giant SNC-Lavalin. Those allegations were first reported by the Globe and Mail, citing unnamed sources.

If she did feel pressured, she did not act and did not intervene on behalf of SNC-Lavalin. But a few months later, she was shuffled out of her job as justice minister and attorney general and into the job of veterans affairs minister.

Then, last week, as Liberals themselves seemed divided over the optics of seeing the country’s first-ever Indigenous justice minister being shuffled aside for what appeared to be craven political calculations, Wilson-Raybould stepped down from cabinet altogether.

Meanwhile, all through the week, Trudeau and other Liberals struggled to explain what had happened while Wilson-Raybould announced she had retained a former Supreme Court justice to provide her with advice about what, if anything, she might say about the whole matter.

Ipsos found that, among the 1,002 Canadians it surveyed online from Thursday through to Monday, nearly half or 49 per cent said they were aware of this rapidly shifting story involving SNC Lavalin, Trudeau and Wilson-Raybould.

And it appears many are changing their opinion of the government as a result.

Scheer’s Conservatives appear to have benefited from this slide. That party is now at 36 per cent support, up three points since the end of 2018.

“The big trouble spot is now Ontario, where the Tories have a six point lead over the Liberals,” said Bricker. “The way the vote breaks in Ontario suggests that the Tories are doing well in the 905, where the Liberals won their majority in 2015.”

The NDP and its leader Jagmeet Singh, meanwhile, continue to languish, with 17 per cent support right now versus 18 per cent at year-end.

The poll was out of the field before Monday afternoon’s bombshell news that Gerald Butts had quit his post as the prime minister’s principal secretary. Butts, one of Trudeau’s closest friends, had played a critical role in the revival of Liberal fortune and was, along with Trudeau’s chief of staff Katie Telford, central to Trudeau administration. Butts said he had done nothing wrong but was resigning to avoid being a further distraction to the government’s agenda.

In any event, Ipsos found that even before that additional turmoil, voter approval of the Trudeau government had dropped nine points since the beginning of the year down to 42 per cent in its most recent pulse-taking.

Trudeau’s own personal approval rating is now two points lower than it was after his disastrous trip to India this time last year.

And yet, Trudeau is still doing better than his two main rivals, Scheer and Singh, who continue to have lower approval ratings than Trudeau.

“All is not bad for Trudeau,” Bricker said. “When assessed head to head with his major rivals, Scheer and Singh, he still does well on specific leadership attributes. Although the gap appears to be closing now.”

And just 38 per cent of those surveyed believe the Trudeau Liberals deserve re-election, while 62 per cent agreed that it was time to give another party a chance at governing.

A margin-of-error could not be calculated for this poll as the sample surveyed was not drawn randomly. That said, Ipsos says the accuracy of its polls can be gauged using a statistical measure known as a credibility interval. Applying this technique to this poll, Ipsos believes this poll would be accurate to within 3.5 percentage points, 19 times out of 20, compared to a poll of all Canadian adults

Exclusive Global News Ipsos polls are protected by copyright. The information and/or data may only be rebroadcast or republished with full and proper credit and attribution to “Global News Ipsos.” This poll was conducted between Feb. 14 and Feb. 18, with a sample of 1,002 Canadians from Ipsos’ online panel. The precision of Ipsos online polls is measured using a credibility interval. This poll is accurate to within +/ – 3.5 percentage points, 19 times out of 20, had all Canadian adults been polled.