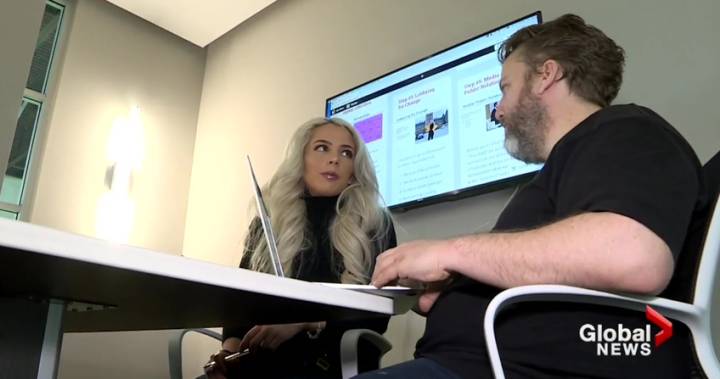 TheySaid.org allows users to submit anonymous tips about peeping Toms, hoping that if there are enough complaints about a particular business, others will be warned to steer clear of the establishment and the police will be forced to investigate.

It’s a personal mission for Eatz, who said she was a victim of upskirting on the floor at a Google-sponsored event two years ago — and didn’t know it until she found a video of herself online.

“It was really horrible,” said Eatz. “I was really depressed and traumatized.”

Google chose not to comment to Global News on the alleged incident.

Eatz and Trus then began a mission to see how many people across the city may have been victims of upskirting and a quick search online gave them an idea.

“It’s upsetting that a lot of these people can’t go to public washrooms or unisex washrooms and feel safe and have to check for cameras all the time,” said Eatz.

WATCH: Man charged with voyeurism at BCIT in Vancouver (July 2018)

Hans School, president of SpyTech, told Global News that part of the problem is that cameras are getting smaller and record in better quality. It’s easy enough to even purchase cameras that look like wall outlets online, he said, or you can make your own at home, sticking a small camera behind fake wall socket.

Richard Trus is the co-creator of a website (https://t.co/zIrJJXVq6Z) that asks the public to flag places where they suspect cameras are hidden in public washrooms or change rooms. Here’s what he says he fears if peeping Toms aren’t stopped. @globalnewsto pic.twitter.com/srZovVAGrX

That’s exactly what happened at a Starbucks at the intersection of Yonge and King streets in downtown Toronto. When the coffee company got into hot water after it failed to notify the public right away that a wall-socket camera had been discovered under their bathroom sink, facing the toilet.

Eatz and Trus hope that their website gains enough traction to try and curb secret recordings in public washrooms.

“It’s not until it happens to you,” Eatz said. “Then you realize this is a big issue and needs to be tackled right away.”