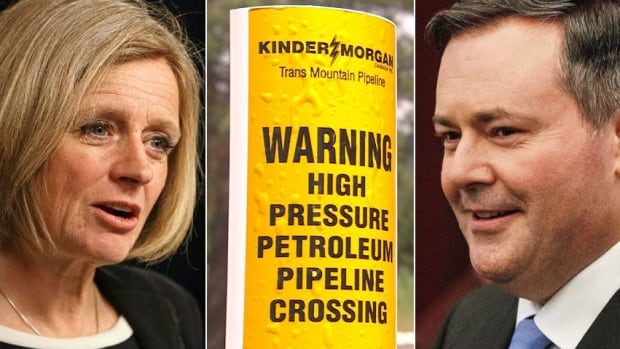 « They’re attacking him for things that people admire about him — his tenacity, his long history in politics, his slickness and determination as a politician. »

The Opposition Leader has no strategy — only temper tantrums.– NDP talking points

The documents account for all communications between Energy Minister Margaret McCuaig-Boyd and her chief of staff from April 8, when Kinder Morgan issued an ultimatum on the Trans Mountain pipeline expansion, to May 29, the day the federal government announced it would buy the embattled pipeline.

Pages of the talking points are dedicated to lambasting Kenney’s policies and political chops. One section of the suggested talking points is titled « Kenney’s Energy Flip flops.’

The documents describe Kenney as « just another Ottawa politician » who « can’t keep his story straight » and who « has no strategy — only temper tantrums. »

« The Opposition Leader sat on his hands for a decade in Ottawa … He failed to do his job so we’ll do it for him, » reads the document.

But Brown said the strategy might backfire against Notley in the next election, which must be held on or before May 31, 2019.

« All they’re doing is reminding people about the things they begrudgingly respect about Jason Kenney, » Brown said.

A series of focus groups conducted by CBC in May suggested that Notley is more popular than her party, while Kenney is not as popular as the UCP.

I feel sorry for this government.– Warren  Kinsella

« The more they (the NDP) harp on Kenney on a personal level, it will leave Albertans wondering whether they are really focused on the key issues. »

Alberta political strategist Warren Kinsella agrees that keeping Kenney in the crosshairs is not the strategy to keep Notley from failure in the next election.

« They’re nervous, they’re concerned, » Kinsella said, who noted that the reigning NDP is acting like they’re in opposition. « The polls have been showing for months that Kenney is the one to beat.

« I feel sorry for this government because I think Notley is a decent and effective leader. But just the bottom line is, she’s likely to lose because of something completely beyond her control. »

With files from Clare Bonnyman, producer with CBC Edmonton AM