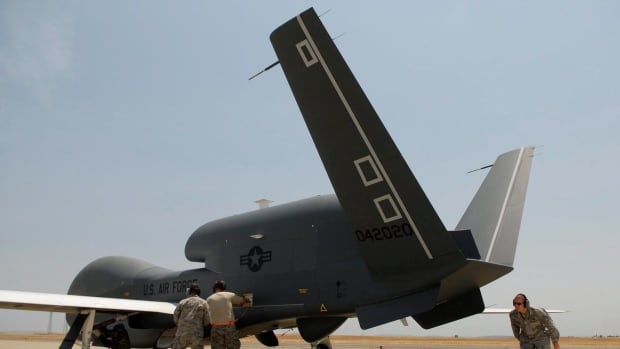 A used German drone is one of a handful of aircraft under consideration by Transport Canada for its long-delayed Arctic surveillance program.

Marie-Anyk Cote said the plan is to buy an aircraft to detect and monitor oil spills, survey ice levels and marine habitats and keep track of shipping and ice movement in Canada’s far northern waters.

« As part of its technical assessment, the government sought information from suppliers to better understand the technology and the solutions available, » Cote said in an email.

The Associated Press reported on Monday that Canada was negotiating with Germany to purchase a secondhand Global Hawk surveillance drone, which originally cost the Germans $823 million.

Cote said « it is still premature to speculate which remotely piloted aircraft system will be purchased » and that the evaluation is still underway.

In a statement issued to AP, Germany’s defence ministry said talks with Canada were planned, but declined to comment on a possible sale price or closure date.

The news surfaced in a response to lawmakers tabled by the German government in the Bundestag, Germany’s parliament. It stated that Germany has decided to « begin concrete negotiations with Canada for the sale of the Euro Hawk aircraft, two ground stations and possibly certain spare parts. »

Northrop Grumman, the maker of the Global Hawk, pitched the Canadian military on buying the high-altitude surveillance system a few years ago.

New, the aircraft cost more than US $131 million each.

National Defence has its own, separate drone program which is not expected to start delivering aircraft until 2021. That new fleet will not be fully operational until 2023.

The drone under consideration by Transport Canada is a prototype that was purchased by the Germans in 2000, according the AP report.

It has flown only a handful of times; the program was cancelled because of skyrocketing costs and the German government’s inability to get it certified to fly in Europe. According to 2013 German media reports, the manufacturer had refused to share technical data with the German government and the drone lacked an anti-collision alarm required by European regulators.

According to the German government’s written response, the drone has now been « demilitarized » — meaning it has been stripped of its U.S.-made radio equipment, GPS receiver and flight control system.

There could be more complications ahead if Ottawa is successful in negotiations with the Germans.

A year ago, CBC News reported the Arctic drone surveillance program had been delayed because of complex international arms control rules that would categorize the unmanned aircraft as a missile.

The federal government approved $39.5 million for a technical assessment in 2015 — and the plan had been to have a small fleet airborne by last spring.

Officials told CBC News last year that they were not expecting delivery of the drones until 2020.

The Missile Technology Control Regime (MTCR), adopted by Canada and 34 other countries, was intended to prevent the spread of weapons systems that can deliver nuclear missiles. Drones were added to the list recently and the rules restrict missiles and drones from carrying a payload of more than 500 kilograms or travelling more than 300 kilometres.

A fully loaded Global Hawk can carry a sensor suite payload weighing up to 540 kilograms.

With files from the Associated Press