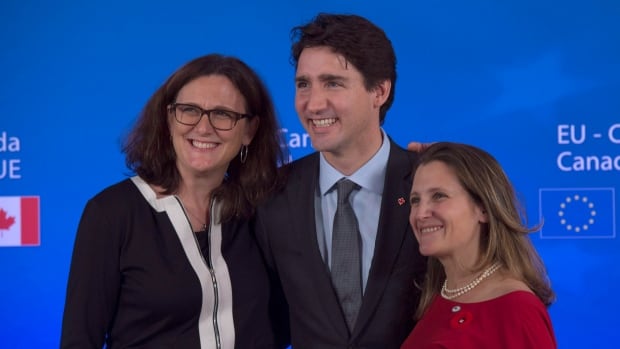 The European Union’s trade commissioner Cecilia Malmstrom has no time for anyone who tries to bully Canada’s Foreign Affairs Minister Chrystia Freeland — even if it’s Donald Trump.

« You have a fantastic chief negotiator in Ms. Freeland. I think she is doing an excellent job under very tough conditions, » Malmstrom told Chris Hall in an interview airing Saturday on CBC Radio’s The House.

Malmstrom reacted strongly to the suggestion that the U.S. administration is attempting to bully Freeland after Trump criticized Canadian NAFTA negotiators in a press conference Wednesday.

« We’re very unhappy with the negotiations and the negotiating style of Canada. We don’t like their representative very much, » he said.

Trump did not mention Freeland by name, but she has been acting as the lead official for Canada during the ongoing NAFTA talks.

Malmstrom said Trump’s comments show that « it is increasingly difficult dealing with the Americans. » She said she frequently discusses trade issues with Freeland as both Canada and the European Union work on separate deals with the U.S.

« We talk regularly. I don’t think I have advice to give her, but we are sharing our experiences because it’s more important than ever that the European Union and Canada are sticking together, » she said.

Other senior U.S. officials have been voicing frustration with Canada lately as the talks have dragged on. Key Trump ally Rep. Kevin Brady, the Texas Republican who chairs the House ways and means committee, criticized Canada for « dragging its feet » on NAFTA.

« Canada is not an easy trading partner, » he told CNBC’s Squawk Box earlier this month.

Republican House whip Steve Scalise slammed Canada’s hardball negotiating tactics and admitted a « growing frustration with many in Congress » over the delay in arriving at a deal. 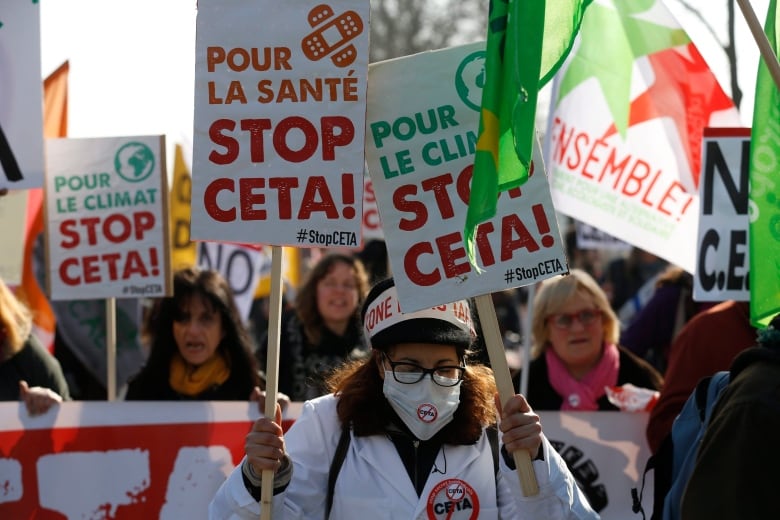 Malmstrom said the pattern of behaviour coming the United States is causing other countries to flock to Canada and the European Union for trade partnerships.

« Lately we have seen there are increasing disagreements between many countries around the world and the way is U.S. is turning very unilateral, » she said.

« More and more countries are coming out and want to work with the EU and Canada to strengthen the multilateral relationship. »

Canada slow to move on CETA?

Malmstrom is in Montreal this week to mark the one-year provisional application of CETA, the free trade deal between Canada and the European Union.

Ninety-eight per cent of CETA came into effect last September on a provisional basis, sweeping away tariffs on a large number of goods and widening access to Canadian beef in Europe and EU cheese and wine in Canada.

But early data suggest European businesses may have been faster to capitalize on CETA than Canadian ones, a point Malmstrom conceded.

« Maybe the Europeans have been a little bit quicker in assessing the possibilities [of CETA], because we are more used to different markets, » she said.

« In Canada, the export is very focused historically on the U.S., so it’s a little bit bigger step to try to get accustomed to the European Union system. »

Roughly half of the EU member nations have not yet ratified CETA. Malmstrom is working on getting holdouts like Italy — which is concerned about what it sees as insufficient protection for the country’s specialty foods — and France on board.

« We’re in dialogue with the Italian government to help them get maximum information about how this is benefitting Italy, and what Italy can do to take advantage of it, » she said.

But Malmstrom admitted the long road to CETA « was not an easy ride » and she has no clear end date for the ratification process.

Listen to the full interview with Cecilia Malmstrom below, and tune in to The House on CBC Radio Saturday at 9 a.m. EST. Subscribe to the podcast here.

EU Trade Commissioner Cecilia Malmström sits down with The House’s Chris Hall to chat about Donald Trump’s criticism of Chrystia Freeland, the future of CETA and how NAFTA is impacting the world. 10:40