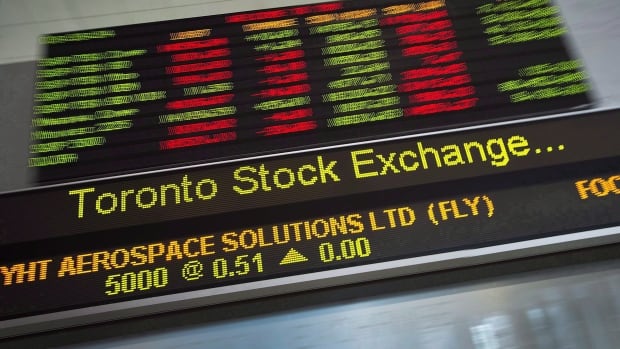 Canada’s main stock index sustained its largest loss in more than a month while the loonie regained lost ground after the Canadian economy grew slightly faster than economists had expected in July.

The Canadian dollar traded at an average of 77.25 cents US compared with an average of 76.66 cents US on Thursday, boosting expectations that the Bank of Canada would raise its key interest rate next month.

The dollar’s performance was another positive read on the Canadian economy, said Ian Scott, an equity analyst at Manulife Asset Management.

« That against the U.S. dollar on a day where U.S. consumer spending data came in a bit weaker than expected I think kind of took some of the strength of the U.S. dollar and gave some strength to the Canadian dollar, » he said in an interview.

The Canadian economy grew by 0.2 per cent in July compared to a 0.1 per cent increase expected by economists. U.S. consumer spending edged up just 0.3 per cent in August, marking a slowdown from gains of 0.4 per cent in June and July.

The TSX closed down and gold rose as investors moved to safety after Italy’s new government announced a big increase in spending that would push its budget deficit much higher than planned by the previous government.

« I think it just kind of reverberated through the markets a bit today, » Scott said.

« So a pretty defensive trade today that definitely speaks to the flight to safety you’re seeing a bit, » said Scott.

BlackBerry led the index as its shares gained 10.2 per cent after its latest financial results topped expectations and it outlined plans for growth. West Fraser Timber Co. fell the most at 6.43 per cent as lumber companies were hit by lower futures and an analyst’s downgrade.

Consumer discretionary, energy, telecom, base metals, financials and materials fell the most.

Banks in Canada and the U.S. were hurt from the Italian uncertainty, said Scott.

« The banks are kind of dragging things down today, which you would expect on a day where U.S. banks are underperforming and yields have been off a bit. »

Scott said he doesn’t think there will be upswings until there is more clarity on trade negotiations and the prospect of tariffs.