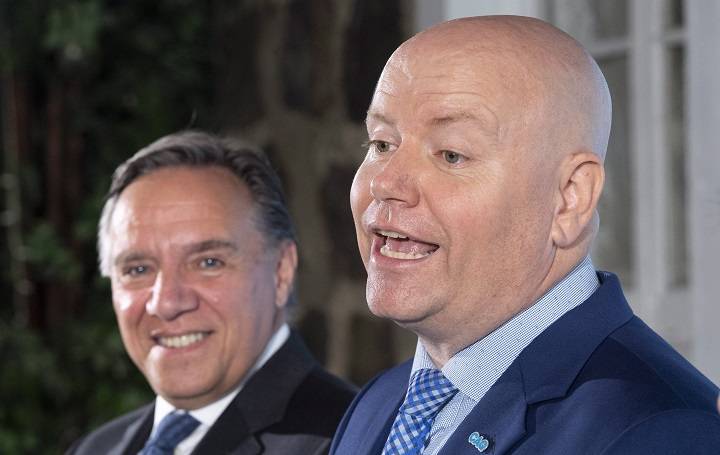 Quebec Premier-designate François Legault will be welcoming a host of new faces along with some more familiar ones as his party forms Quebec’s next government.

Aside from Legault and a handful of veterans who have been at his side since the Coalition Avenir Québec’s first election in 2012, his team features many political newcomers.

They include a former police officer, an economist who advocates for small government, a pediatric surgeon and an Olympic speed skater.

Legault said Tuesday his new cabinet will be sworn in within the next two weeks, and he will have some experienced choices when filling such top posts as finance and health.

Legault will also be looking at Youri Chassin, an economist who until last year was research director at the conservative Montreal Economic Institute. Before that Chassin worked as an analyst with the Conseil du Patronat du Quebec, the province’s employers’ council.

The Coalition has touted Danielle McCann, the former CEO of the Montreal health and social services agency, as a possible health minister. In that role, McCann co-ordinated services for more than 60 health-care institutions, including seven university hospitals.

Lionel Carmant, a pediatric neurologist, is another star.

Carmant, who arrived in Quebec with his parents from Haiti at the age of four, studied at McGill University and Harvard and took part in humanitarian missions in Haiti, Mali and Vietnam. He has been involved with the party since its founding.

He became well-known for his presence at major news events, such as the 1998 ice storm crisis and the 2012 student protests.

Another new face in politics is Sonia LeBel, who was in the public eye when she acted as chief prosecutor at the Charbonneau Commission, Quebec’s probe into corruption in the construction industry.

Her biography says Lebel worked for more than 20 years with Quebec’s Director of Criminal and Penal Prosecutions where she specialized in criminal law, drug-related offences and organized crime.

Geneviève Guilbault, a former spokeswoman for the Quebec coroner’s office, has also enjoyed a high profile. She managed all media relations during the tragic Lac-Mégantic train derailment and the deadly fire at a nursing home in Isle-Verte, Que.