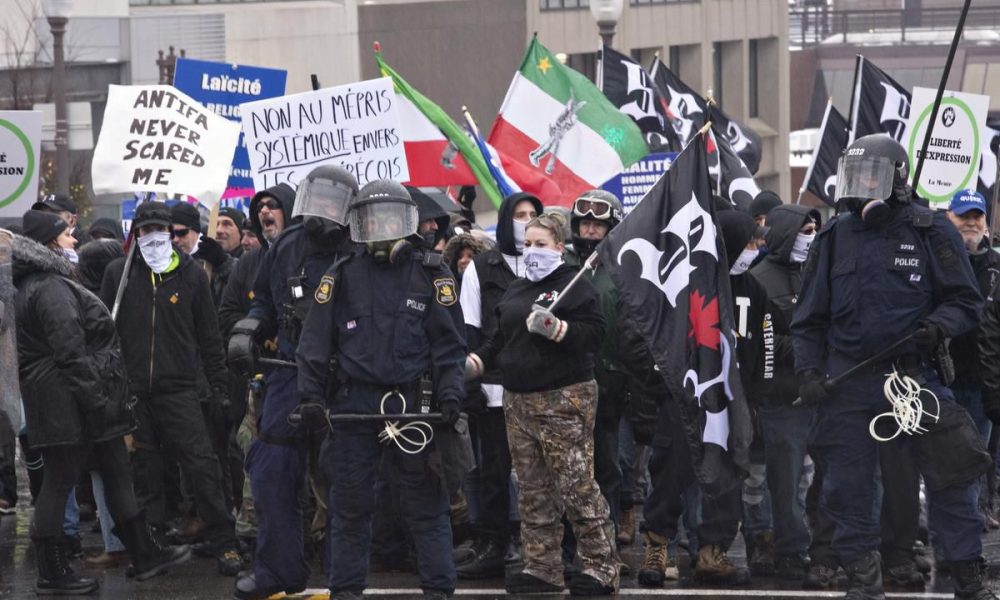 OTTAWA—There has been a dramatic rise in the number of white nationalist and right-wing extremist groups operating in Canada over the last three years, causing police and security agencies to reassess the threat the movement poses.

But more worrying, for those who keep tabs on Canada’s extreme right fringe, is that alliances seem to be building between groups as the far-right makes gains in the United States and Europe. At the same time, it’s not clear that Canada’s law-enforcement and security agencies are mounting a similarly concerted response.

Perry, who researches hate crimes and the far right at the University of Ontario Institute of Technology, attributed the growth to far-right causes and ideas infiltrating mainstream politics in Canada and other Western countries.

“You’ve got these enabling forces that really promote those sorts of, I don’t want to call them values, but sentiments, attitudes,” Perry said.

“It’s not as anomalous as we like to think. If we look at public opinion polling over the last couple of decades, there’s always a substantial proportion that displays some hostility or distrust or dislike … about immigration, about Muslims, about LGBTQ communities, those others that are frequently targeted.

Aside from the overall growth in numbers and activity — both online and offline — Perry has observed attempts at bridge-building between far-right groups. A rally last July on Parliament Hill, for instance, attempted to bring together some of the bigger names in Canada’s far-right: La Meute, Soldiers of Odin, the III%, Storm Alliance, and the Proud Boys.

The rally could not be considered a success. Fewer than 100 people gathered on Parliament Hill on the Saturday of the rally, which didn’t even merit a counter protest from anti-fascists.

But such alliances between Canadian right-wing extremist groups would be a departure from the movement’s at-times violent and fractious past. In fact, it may be misleading to call it a “movement” at all — the far-right in Canada has traditionally been characterized by infighting, splinter groups, and disorganization, with groups and individuals largely left to the fringes of society.

If that’s changing, as experts claim, it presents a new challenge for Canadian law enforcement and intelligence agencies that have only recently begun to reassess the threat Canadian right-wing extremism poses.

The term “right-wing extremism” covers a broad range of ideologies, individuals and groups in Canada. But what little scholarship exists on the groups offers some common themes: nationalism, often driven by racism or xenophobia; a perception that the government is illegitimate or holds no authority over the movement’s adherents; a desire to preserve an imagined “heritage” or “homeland.”

RCMP Assistant Commissioner James Malizia told the Star that far-right groups in Canada have become more emboldened in recent years, as waves of populism have rolled over the United States and Europe.

“I think one of the challenges is being able to define what exactly the groups or individuals are espousing, whether that is escalating from hate speech to … a path where people are starting to think about heading toward violence.”

Research suggests that hate often does turn into action.

Between 1980 and 2014, there have been more than 120 incidents involving right-wing extremist groups in Canada, according to Perry and co-author Ryan Scrivens’s 2015 research. The “incidents” range from drug offences to attempted assassinations, firebombings and attacks.

That’s compared to seven Jihadist-inspired incidents over the same period, according to Perry and Scrivens’s accounting.

A similar ratio was reported in the United States. According to the Anti-Defamation League’s Centre on Extremism, right-wing extremists and white nationalists were responsible for 59 per cent of all extremist-related fatalities last year. The number of killings at the hands of white supremacists more than doubled compared to 2016, the report noted.

From the fringes to mainstream

Researchers have warned a similar dynamic might exist in Canada, with far-right groups joining law enforcement or the Canadian Forces to gain access to training and weaponry.

The Star requested an interview with the Canadian Security Intelligence Service (CSIS) in July. That interview request was declined, as was a followup request sent in September. The Star sent a detailed list of questions to the spy agency, including whether or not it has conducted a threat assessment of the far-right infiltrating Canadian law enforcement.

The agency did not directly address the question.

“I cannot go into specifics regarding how or at what level CSIS resources investigations and threats,” wrote Tahera Mufti, a spokesperson for the agency.

According to a report from the spy agency’s watchdog released earlier this year, CSIS abandoned an ongoing investigation into Canada’s far-right in 2016. According to the agency, the far-right no longer constituted a national security threat — instead, it was a “public order threat” best left to individual police forces.

Perry disagrees with that determination.

“For me that’s a national security risk, as well.”

Unlike in some European countries, Canada’s extreme right has failed to find a comfortable home within traditional federal political parties.

Even Maxime Bernier, whose new People’s Party, which has focused on criticizing “extreme multiculturalism” and immigration, explicitly said xenophobia has no place in his political venture. At least for now, the far right seems to remain largely recognized as toxic to mainstream electoral politics.

As evidence of the increasing number and coordination of extreme right-wing groups in Canada mounts, it remains difficult to determine the extent to which there is any concerted national response from police and security agencies.

CSIS reopened its investigation into Canada’s far right after Alexandre Bissonnette killed six Muslim men worshipping in their Quebec City mosque. But the agency has provided little explanation why it considers right-wing extremism part of its mandate now, when it didn’t consider the phenomenon a national security issue in 2016.

Mufti, the agency’s spokesperson, said CSIS is now working “extensively” with the RCMP and local law enforcement “to investigate the threat posed by right-wing extremism as it falls under the CSIS mandate.”

While the RCMP and the Canadian Association of Chiefs of Police (CACP) provide some national coordination on terrorism and extremist violence issues, investigations into right-wing extremism are largely left to a patchwork of individual local police forces and hate crime units.

For Bernie Farber, who has been chronicling and combating Canadian hate groups for more than three decades, federal agencies’ slow realization of the threat right-wing extremists pose is frustratingly predictable. Farber, who now leads the Canadian Anti-Hate Network, said when the hate group Heritage Front was active in the 1980s and 1990s, police initially dismissed the threat.

“Nothing ever changes, right?” Farber said.

“We used to hear the same thing from the Toronto police, the RCMP, the OPP and CSIS, that the threat isn’t coming from the far right … What troubles me the most is that I just don’t understand how we don’t learn from our own past experiences. We know how dangerous these people can be. And to pooh-pooh it and say this is not an issue for authorities is at best wilful blindness.”

Malizia said CACP has been encouraging smaller communities, as well as territorial and provincial governments, to develop concrete plans to address a sudden attack.

But Malizia acknowledged that the public conversation around right-wing extremism is very different from other types of terrorism and crime.

“Is it the media reporting that way? Is it a perception? Could we be doing a better job at bringing clarity to the issue? I think we all probably have a role to play in that,” Malizia said.

“Why don’t we talk about this?” asked Peter Singer, a political scientist and strategist at the New America think tank, which researches security and extremism.

“One reason we avoid talking about it is to avoid appearing too partisan, a desire to be even-handed. But there’s an irony that, in trying to appear unbiased, we actually show bias in not talking about it.”

Singer, the author of a new book on the “weaponization” of social media, pointed to traditional media’s search for false balance in reporting on the Charlottesville rally in 2017.

“We had open, outright white supremacists, nationalists, neo-Nazis, the horrible imagery of marching with torches. But then, more importantly, the killing of a young woman not by (anti-fascists) but a young man who was a white nationalist,” Singer said.

“Afterwards in the United States, major U.S. newspapers ran more op-eds condemning the counter-protesters … than those who had just committed the crime of the killing … It’s a strange thing.”

Part of the problem in speaking about extreme-right violence as a symptom of a larger issue, Malizia said, is that right-wing extremism is not seen as a coherent movement.

Seemingly disparate attacks — like Justin Bourque’s killing of three Mounties in Moncton in 2014, or Alexandre Bissonette’s slaying of six worshippers at the Centre culturelle Islamique due Québec in 2017, or the Toronto van rampage that killed 10 people earlier this year — are not connected to the larger discussion of far-right extremism in Canada.

“The violence tends to be spontaneous and opportunistic, and difficult to detect,” Malizia said.

“When we look at those, it’s difficult sometimes because there may not be that clear trigger that allows us to then prevent. … Those that are closest to the individuals are usually best placed to notice those changes and to flag them.”

Perry told the Star that there has been a “dramatic” change in the willingness for law enforcement and intelligence agencies to discuss right-wing extremism, but she has seen little in terms of plans to address it.

As the movement evolves, the question remains: is the status quo sufficient?

In the coming days, the Star will examine the question from three different angles: how right-wing extremism is finding a foothold in Canada’s military, how different police forces address the growing threat of right-wing extremism, and how the movement is organizing online — and what might be done about it.