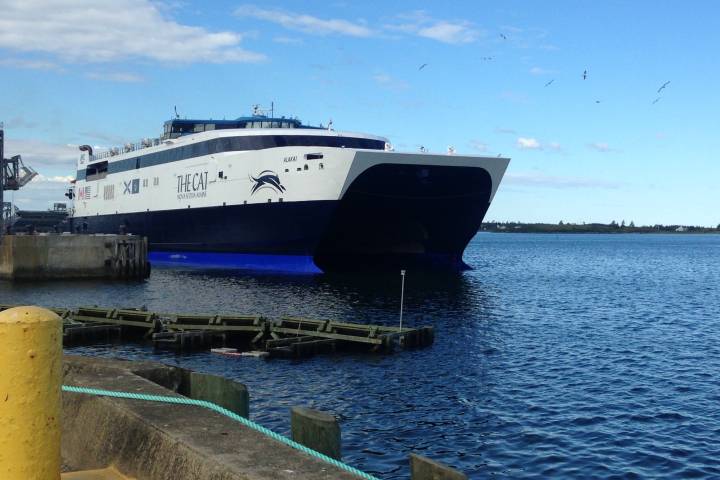 Bay Ferries Ltd., is set to shift the American port of call for its high-speed ferry service from Portland, Maine to Bar Harbour, Maine, pending approval of a five-year lease agreement from the Bar Harbour Town Council.

The ferry — better known as the CAT — currently provides service between Yarmouth, N.S. and Portland, Maine. But the lease agreement between Bay Ferries and the City of Portland is set to expire on Nov. 15.

Bay Ferries has an option to renew for another year, and must notify Portland of its decision by Oct. 15. The City of Portland says that as of Tuesday, they have not been notified by Bay Ferries of their decision.

But a draft version of a lease agreement between Bar Harbour and Bay Ferries indicates that a move is well on its way to becoming reality, with the lease agreement — if passed — set to go into effect on Dec. 1, 2018.

The Bar Harbour Town Council will consider the lease on Oct. 16.

Set to expire on October 31, 2023, the agreement will bring with it a significant cost that Bay Ferries Ltd., and the province — who provides a $10 million annual subsidy to the service — must bear.

Bay Ferries Nova Scotia will need to carry out some improvements to the ferry terminal in Bar Harbour so that the CAT can use it.  The lease says that ramp structures will need to be installed at the terminal, including fixed and floating bridges, supporting pontoons, hydraulic cylinders and a transition ramp and apron.

Other improvements that Bay Ferries must make to the terminal include improving the customs operations area so that it is suitable for the U.S. Customs and Border Protection Agency, the ferry zone so that ticket booths, security fencing and security cameras can be installed and making “signficate structural alterations” to the terminal.

Officials with Bar Harbour have previously estimated those costs to be US$3 million, with town manager Cornell Knight previously saying that Bay Ferries has offered to front the cash needed to make it happen.

It’s not clear which improvements are included in that $3 million estimate.

The Nova Scotia government will also be on the hook for $1 million as they are set to guarantee the lease itself.

“Bay Ferries is in discussions with US Customs and Border and the Coast Guard and preparing cost estimates for renovations/improvements,” Knight said in an email on Tuesday.

According to the lease agreement, the CAT will arrive in Bar Harbour around “mid-day” and will leave at approximately 3 p.m.

The vessel will then overnight in Yarmouth, N.S.

Bay Ferries can renew the lease for a two-year period, although it must give notice to Bar Harbour that it intends to do so by August 2, 2023.

A request for comment from Mark MacDonald, CEO and President of Bay Ferries Ltd., has gone unanswered.

Nova Scotia’s Minister of Transportation said in July that the province would not stand in the way of a move for the CAT.

On Tuesday the province continued to remain tight lipped on the issue.

“We continue to discuss the situation with Bay Ferries but are not at any key decision points at this stage,” said Marla MacInnis, a spokesperson for the province’s Department of Transportation and Infrastructure Renewal.

The Nova Scotia government inked a 10-year agreement with Bay Ferries to restart the service back in 2016.

The department’s executive director of finance, Diane Saurette, has previously told Global News that there would be significant savings in annual operating costs for Bay Ferries if the service were to move. Bar Harbor is closer to Nova Scotia and the move would reduce fuel costs.

“I don’t want to say it’s exciting, but there’s opportunity there and so we have to look at — both Portland and Bar Harbor are great ports. There (are) advantages and disadvantages to both.”

The Nova Scotia government put up nearly $1.5 million earlier this year to upgrade the Portland ferry terminal, as ordered by the U.S. Customs and Border Protection Agency.

The agency had warned that without nearly US$7 million in upgrades, the facility would not meet federal standards.

The province’s investment was in equipment required to keep the ferry running this year and Hines said the equipment is portable and could be moved if needed.