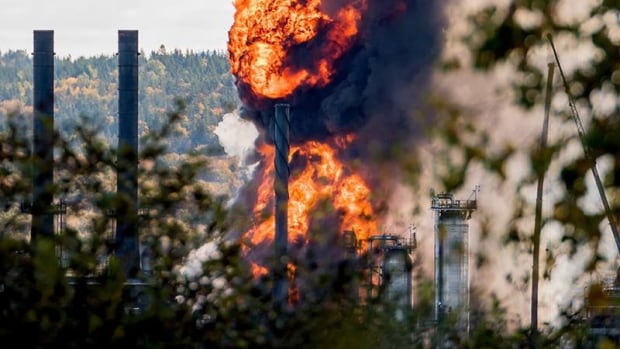 Saint John Mayor Don Darling says he plans to have « focused discussions » with industry officials after an explosion and fire at the Irving Oil refinery Monday shook area homes, and sent at least five people to hospital with non-life threatening injuries.

Irving Oil officials are still trying to determine the exact cause of the « bed-shaking » morning blast that saw flames shooting an estimated 30 metres high and a plume of black smoke billowing over the city’s east side for hours, but believe it stemmed from a malfunction in a diesel-treating unit.

The incident comes on the heels of a « significant » explosion last month at the American Iron & Metal Company Inc. scrap-metal recycling plant on the city’s waterfront, an apology from Irving Oil in June for the release of a mystery product from the refinery, and a butane leak at the refinery in January that forced 65 people from their homes for days.

In a Facebook video post, Darling said Monday was « a bit of a scary day for everyone » and he has heard from « many » concerned residents.

« And I’ll assure you that we will have those next phase conversations at the right time, » he said.

« The days, weeks and months ahead, will give us the time to have focused discussions and look for a new relationship going forward, » Darling posted on Twitter.

The Irving Oil facility is the largest refinery in Canada. It employs about 1,400 people and is capable of producing more than 320,000 barrels per day at the sprawling site, which covers more than 300 hectares.

Although the explosion occurred on the Thanksgiving holiday, close to 3,000 people were working onsite due to a regularly scheduled maintenance project. About 100 were the normal operations crew, while the rest were tradespeople working on the turnaround project, officials said.

The refinery, which is less than five kilometres from the city centre and surrounded by residential neighbourhoods, was evacuated and shut down following the 10:16 a.m. explosion.

No evacuation order was issued for area residents, but Saint John Emergency Measures Organization (EMO) officials did encourage people to stay in their homes up until about 6 p.m., when the situation was deemed stabilized.

« We work under the direction of the boots on the ground … We go by the people that are onsite that can make that situational assessment and at no point in time did they think that we should actually evacuate the area, » he said.

« It seemed to be contained to that [diesel-treating] unit for the duration. » 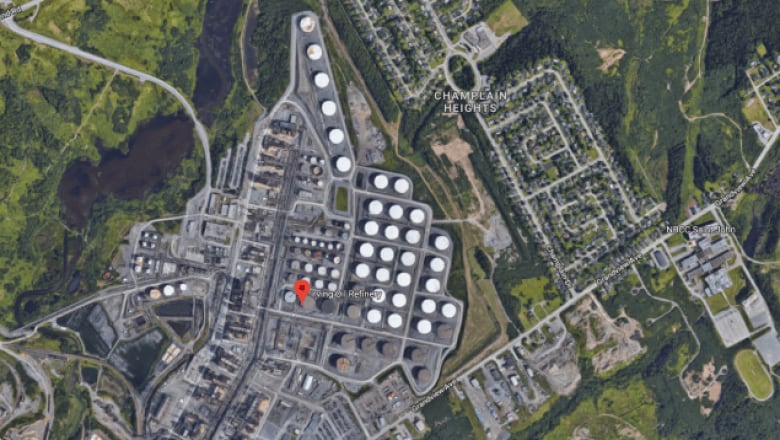 The Irving Oil refinery, which opened in 1960, covers more than 300 hectares on Saint John’s east side and is surrounded by residential neighbourhoods. (Google Maps)

Darling said he stands by that decision.

« Had there been the need for [evacuation, fire] Chief [Kevin] Clifford, the head of our EMO with 40 years of experience, would have made that call with is team, » he said.

Air quality monitoring is ongoing. As of late Monday night, no concerns to public health had been identified, officials said.

The mayor commended emergency officials for doing a « stellar job » and said he’s grateful no one was killed or seriously injured.

« Today was a big test and I’m thankful everyone goes home tonight, » he tweeted.

It’s unclear how long the refinery will remain shut down. Irving Oil is working with WorkSafeNB, the Department of Environment and EMO officials to « understand what happened » and decide on next steps, said chief refining and supply officer Kevin Scott.

The company is offering counselling to any employees or contractors shaken by the incident, he said.