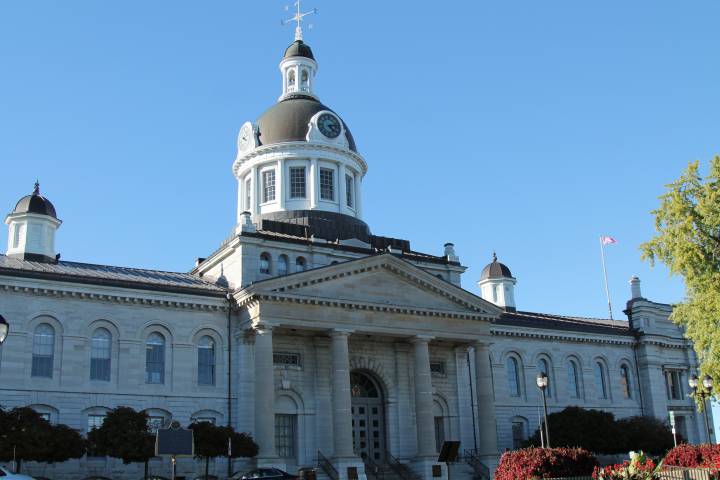 With the municipal elections fast approaching, Global Kingston spoke with each of Kingston’s four mayoral candidates to ask them why they are running this time around.

If you’re still undecided, watch these in-depth interviews with each candidate to help you decide between Eric Lee, Rob Matheson, Bryan Paterson and Vicki Schmolka on Oct. 22.

Eric Lee is known to many Kingstonians as the ‘elevator guy’ from the old S&R Department days.

Although Lee doesn’t have any political experience, he is hoping to rise to the top floor of city politics. He lists tax reform as one of the key platforms in his first-ever campaign for mayor. Lee says he wants to repeal the vacancy tax rebate law, which he blames for the number of vacant storefronts in the city’s downtown core at the moment.

He also wants to focus on protecting tenants from landlords, who he says don’t take care of their properties despite tenant complaints.

Rob Matheson served one term as city councillor for the Loyalist-Cataraqui District from 2006 to 2010 and then left politics to become a local cab driver.

He has also run for mayor once before, and councillor in the last municipal election for the Trillium District, loosing to Adam Candon, but Matheson believes its time for his political comeback.

The mayoral candidate describes himself as a champion of the working person, and he believes the current council has not been keeping the community’s best interest in mind.

Matheson says the current council bungled the purchase of the Cataraqui West Open Space Lands — protected wetlands that can never be developed — with money spent that could have been better allocated. The mayoral candidate would also change Kingston’s annual tax rate, saying Paterson’s 2.5 per cent increases are also not sustainable.

Incumbent mayor Bryan Paterson has served one term as mayor and hopes to serve at least one more. He says he wants to build on the momentum of growth started by the current council while promising to keep annual property tax hikes at or below 2.5 percent.

Paterson listed the third crossing, the airport expansion and the improvements on Breakwater Park as accomplishments solidified while he was in office.

Paterson says he wants a chance to build more housing and to address the city’s low vacancy rate by pushing for more developments.

Paterson responded to criticism about how he and his council closed the deal with Homestead Land Holdings Ltd. to build two high rises — 19- and 23-storey buildings — on Queen Street. The approval of that deal was done behind closed doors and later voted on in public, a process some have criticized for its alleged lack of transparency.

Paterson defended the negotiations, arguing that some things needed to be done behind closed doors in order not to tip off Homestead of the city’s plans.

As a former city councillor, Vicki Schmolka represented the Trillium District from 2006 to 2010, and she believes city hall has lost its way and needs to get back to basics, like fixing roads and sidewalks. Schmolka was chair of planning committee for four years, and she believes the current council has been disrespecting residents who tried to get involved in the planning process of certain developments.

Schmolka has also been a critic of the recent deal city hall made with Homestead Landholdings to build two high-rises on Queen Street, finally approved at 19 storeys and 23 storeys. Schmolka believes projects like these don’t follow the city’s official plan, and if she were mayor, she would opt for more residential development in the downtown core, but with buildings six- to eight-storeys high at the maximum.