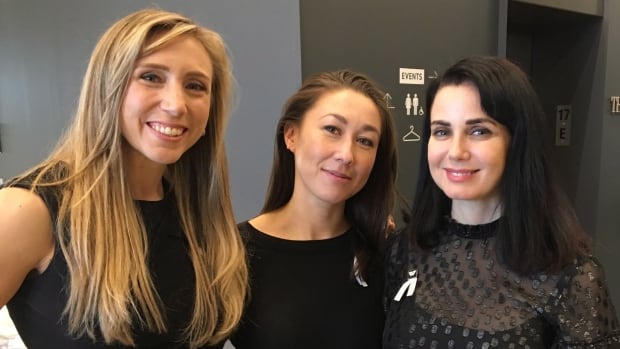 A Canadian group that pushed for change in the country’s screen industry amid the #MeToo movement is taking matters into its own hands after seeing a lack of action.

Actors Mia Kirshner and Freya Ravensbergen, two of the co-founders of AfterMeToo, say the group is building a digital online centre featuring resources for survivors of workplace violence. Formed shortly after the #MeToo movement took off on Oct. 15 of last year amid a flood of sexual misconduct allegations, ​AfterMeToo held a symposium and released a report of nine recommendations aimed at stopping workplace sexual violence.

The group, which was also co-founded by filmmaker Aisling Chin-Yee, submitted the report to government leaders and regulatory bodies for guilds and unions. The Canadian Press recently spoke with Kirshner and Ravensbergen about the digital centre, which they’ll launch sometime in 2019 with a team of volunteers, including lawyers and doctors, many of whom are survivors of sexual violence.

The project, which has the working title Rosa, will include a range of services and information including how to report an act of violence to how to save evidence.

CP:What has been the reaction to your report, which was released in March?

Kirshner: It was excellent — and then we didn’t see enough of the change we wanted and we decided to take literally the bull by the horns and make the changes ourselves.

Ravensbergen: We were a bit naive, I suppose, in thinking that this report would initiate change from leadership — from government, from unions, from production companies. We felt the report was like, ‘Here’s a roadmap and now all you need to do is follow it.’ But no one really made any changes that were from the nine recommendations, and so we got frustrated with no change happening and just decided to incorporate and do it ourselves.

​Kirshner: When we talk about the lack of change, there have been cosmetic changes. But the problem with those cosmetic changes is, it’s the same thing dressed up in different clothes, like the code of conduct.

CP:What else can you say about the project?

Kirshner: Think of it as a digital centre that provides a multiple range of inter-professional services, ranging from health and filling out forms, step-by-step, the ability to ask questions, the ability to look up case law, the ability to get geo-located where you live with the user’s consent, free legal and mental-health support.

Then in Phase 2, our goal is to provide time-limited legal consultations across Canada and trauma-informed therapy that’s available online for users, that are free, to help re-stabilize and help them deal with the trauma of workplace violence.

Ravensbergen: Think of it like a one-stop shop for survivors. When they really don’t know what to do with what’s just happened to them, this is a place where they can go. They can get information, they can get guidance on what their options are and guidance as to what option might be better suited to them.

CP: Who will be handling the calls?

Kirshner: This is a very important distinction to make: We will never, ever give you a link or an external number to call. Everything is created in-house for Rosa, by Rosa, and has to go through a regular security check and hiring practices.… We’re partnered with the Canadian Women’s Foundation, as well, on implementation. So they’ve been working with us hand-in-hand on getting us ready and preparing everything we’ve needed to prepare up until now.

We’re also working with Western University for the study of prevention against violence against women and children, who will be doing our research. Our other partner is [legal clinic] Juripop, who will be handling the legal program. They are based out of Quebec and they are piloting their first project called L’Aparté​, dealing with workplace sexual violence in the entertainment industry.

CP: This seems like a much bigger undertaking than you initially thought of when you started AfterMeToo. Explain the logistics involved.

Ravensbergen: Vibika Bianchi is the lead on this right now, as is Mia Kirshner. Because it’s all volunteer, we’re all doing what we can, when we can. That being said, we are hopeful that when funding comes in, then we’ll be able to hire full-time staff.

Kirshner: I started working on this platform about four years ago, and I began to do research with the police and the sex crimes unit because I felt that, based on my own experiences, the way in which you report is really awful. I wanted to do something in the digital space, so this project has been a long, long time in the making. As for the amount of work this is, I basically took a year off. This is a full-time job. In order to get this done, it requires work every single day, which it has to.

This interview has been condensed and edited.