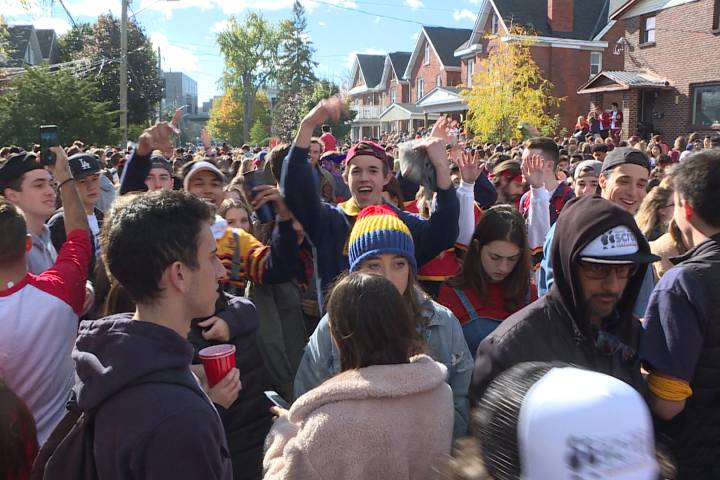 Queen’s University homecoming is an opportunity for past graduates of the school to catch up and reminisce.

Heather Kellington-Dudley, a 1968 arts graduate, says that’s what she was doing when she arrived in Kingston on Friday and toured the university campus.

There are dozens of events taking place at the university over the weekend.

Sarah Indewey, head of Alumni Relations at Queen’s, says the events are set to continue through the evening.

“We have the reunion street festival coming back for its fourth year, (a) very exciting headliner — the Sam Roberts Band — and in addition to Sam Roberts, there’s also some students and alumni bands that will be playing beforehand,” she said.

Indewey says 3,700 alumni registered in advance for homecoming celebrations, with many more registering once they arrived at the university.

However, the unsanctioned street party that has been taking place along Aberdeen and Johnson streets, spilling onto University Avenue, is not part of the official celebrations.

Hundreds of revelers were on the streets before 10 a.m., drinking and partying.

“We were unable to keep Johnson Street from University sort of eastbound — we had to close that down because someone was definitely going to be hit by a car,” he said.

Pete says police are disappointed with the volume of people partying on the streets just north of the university campus.

“There was a significant amount of work done pre-homecoming with lots of different partners, including ourselves, the city, Queen’s, alumni relations and many more,” he added.

According to Pete, there have been several injuries reported.

“I’m unaware right now of the significance of (the injuries), but some of them were from flying projectiles — I believe glass bottles,” he said.

Pete says there was also a report of an individual falling.

“We had an issue of a shed today on Aberdeen Street; I don’t think it collapsed but I think someone fell off it,” he said.

A five-year downward trend on alcohol-related arrests during the unsanctioned street parties may be coming to an end.

Police will have an even greater presence overnight, as the street party is usually larger at night than during the day.

Construction ‘boot camp’ led to coveted trades jobs. But according to city documents, some say it came at the cost of racial taunts and humiliation