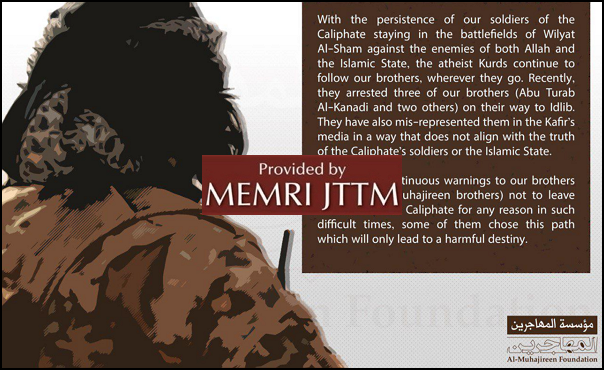 An organization representing the families of extremist group members is demanding the government repatriate 16 Canadians it says are being held in detention camps in northern Syria.

Families Against Violent Extremism said in a statement obtained Wednesday by Global News that nine of the captives were adults and seven were infants and children under age six.

U.S.-backed Kurdish forces have captured several Canadians who were allegedly fighters in the so-called Islamic State, the wives of ISIS foreign fighters as well as their children.

Debate over what to do with them has captivated the House of Commons, which passed an opposition motion on Tuesday, giving the government 45 days to table a strategy for bringing ISIS members to justice.

But the statement by the families group said none had been charged, their indefinite detention was a violation of international law and the fate of the children was a particular concern.

“Winter is drawing in, leaving these children in tents in the bitter cold,” it said. “The children go hungry, lack adequate clothing, and are traumatized by violence. Many are sick without adequate medical care, and lack basic educational opportunity.”

FAVE refuted the government’s claim that there was no safe way to get the Canadians out of Syria, noting it had worked to facilitate the return of an American woman and her four children to Indiana in August.

The group has scheduled a news conference for Tuesday on Parliament Hill, where it says it will “announce plans to likewise help Global Affairs fulfill their duty to provide support to Canadians in dire straits abroad.”

Meanwhile, a pro-ISIS group issued a statement about the capture of Canadian ISIS member Muhammad Ali, warning foreign fighters they face a “harmful destiny” if they stray from the group.

The release acknowledged that Kurdish forces had captured “three of our brothers,” including Ali, and cautioned “not to leave the lands of the Caliphate for any reason in such difficult times.”

The Middle East Media Research Institute, which obtained the English-language release by the Al-Muhajireen Foundation, said it could signal that ISIS was concerned about mounting desertions.

“This new warning, along with other material recently released by ISIS media outlets, may indicate that the organization is facing a wave of defections, mutiny and desertions, in particular among its contingent of foreign fighters,” MEMRI wrote.

A 28-year-old from Mississauga, Ali told Global News in an exclusive interview in northern Syria that he was captured by Kurdish fighters four months ago while trying to cross into Turkey.

His appeal to be returned to Canada has ignited debate in the House of Commons, with the Conservatives demanding the government ensure returning ISIS members do not walk free and the Liberals insisting officials are doing what they can.

The Al-Muhajireen Foundation is not an official arm of the so-called Islamic State but rather disseminates “fanboy” propaganda supporting the terrorist group on the social media platform Telegram.

In an Oct. 16 release, it said “Abu Turaab Al-Kanadi and two others” had been arrested by Kurdish fighters who “continue to follow our brothers, wherever they go.” Abu Turaab was Ali’s ISIS name.

It also said the three captives had been misrepresented “in the unbeliever’s media in a way that does not align with the truth of the Caliphate’s soldiers or the Islamic State.”

“Despite our continuous warnings to our brothers (especially al-muhajireen [foreign fighter] brothers) not to leave the lands of the Caliphate for any reason in such difficult times, some of them chose this path which only leads to a harmful destiny,” it said.

“Distributed in both Arabic and English, the poster reiterates the message issued by the media group warning fighters, and in particular foreign fighters, against leaving areas under ISIS control for any reason,” MEMRI wrote.

The Kurdish People’s Protection Units, or YPG, have said Ali was captured along with a German and a Turkish national “as a result of special operations conducted by our Anti-Terror Units.”

“The terrorist named Muhammad Ali, who is a Canadian citizen, was a one of the ISIS number one snipers,” the YPG said in a statement. “He trained thousands of terrorists in Hasakah, Raqqa and Deir ez-Zor and participated himself in dozens of criminal acts.”

It added that “via his social media accounts, he was encouraging people to join ISIS” and that following the “atrocious attacks” that killed two Canadian soldiers in 2014, he “called for increasing terrorist assaults, declaring that civilians or security personal (sic) should be killed as ‘infidels.’”

Ali does not yet face any charges in Canada.

The propaganda release contradicts Ali’s claim he had left ISIS and was on his way to Turkey when he was captured. Instead, it said that he and others were heading for Idlib, a city in northeast Syria where the last anti-regime rebels were fighting Russian-backed Syrian forces.

Abdulkarim Omar, a foreign affairs official in the self-administration that controls northeast Syria, said Kurdish forces wanted to send the foreign ISIS captives they are holding back to their own countries.

But he told Global News that, while there had been talks with Canadian diplomats months ago, “the Canadian government stopped this process and we don’t know why.”

He said three Canadian ISIS fighters, two women and five children were being detained. “And the number might increase because the campaign to liberate the last pocket of ISIL in Deir ez-Zor is ongoing.”

“Some of them are citizens from both, [they] have Canadian and British citizenship,” he said, likely referring to Jack Letts, dubbed “Jihadi Jack” by the British press.

Global News has confirmed the identities of three Canadian men and three women with seven children. All are being held at makeshift prisons and detention camps in Syria’s northeast corner.