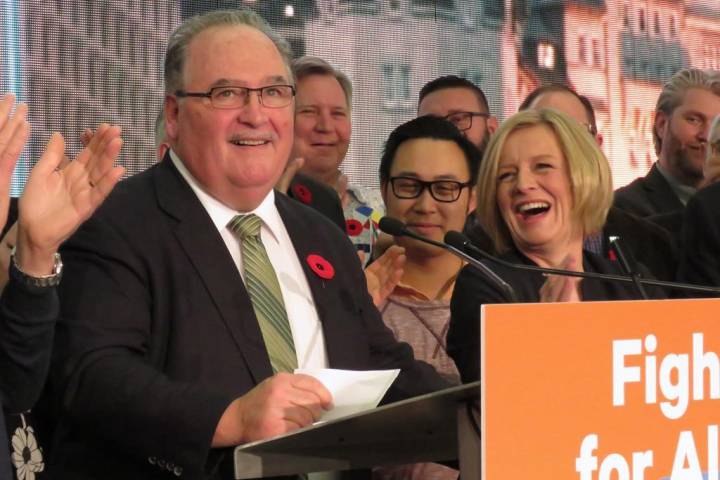 Alberta NDP Government House Leader Brian Mason, in his farewell address to the party he once led, urged members to prepare for a spring vote fight that will be both daunting and bruising.

“We have a wonderful legacy and we want to add to that legacy, but it is under threat,” Mason told delegates Saturday at the party’s annual convention, held at a downtown Edmonton hotel convention centre.

“And there’s no question about it – this is going to be a tough election.”

Premier Rachel Notley is expected to call an election early next year. Opposition Leader Jason Kenney‘s United Conservatives have been strong in opinion polls, running on a platform to roll back a number of initiatives launched by Notley, including the carbon tax.

He said the opposite will take place under a Kenney government.

“He (Kenney) wants cuts, he wants privatization, he wants to move fast so that the opposition doesn’t have a chance to get organized, and he won’t blink,” said Mason.

“Have we seen this movie before? Well, it’s a horror movie and we don’t want to see it again. The movie is called ‘Ralph Klein: The Sequel,’” Mason said, referencing the steep budget cuts imposed by Klein when he took the reins as premier in the early 1990s.

Mason also criticized Kenney for what he called his “flirtation with extremist groups,” such as the anti-immigration Soldiers of Odin, climate-change deniers and anti-abortion activists.

“There is an element to the UCP that is very disturbing and very frightening, and something that Jason Kenney has refused to disavow,” said Mason.

“We have so much at stake, really we do.”

Some candidates running for UCP nominations in recent months have been disqualified or allowed to run despite previous intolerant comments about groups such as Muslims or members of the LGBTQ community.

Kenney has made it clear his party will not countenance hateful views, and has said if elected his caucus will pursue a spending freeze or modest cuts in order to get the current multibillion-dollar budget deficits back to balance.


READ MORE:
How do Alberta’s political parties vet their candidates?

Mason will not run in the election, ending three decades in public life, first as an Edmonton city councillor and then moving to provincial politics in 2000. He is the longest serving current member in the house.

About 1,200 NDP members are attending the convention to debate and pass resolutions and literally pass the hat – or in this case a bucket – for donations.

Delegates passed a number of constitutional changes and policy resolutions, including support for a national pharmacare plan and extending medicare to dental and optic care.

Notley, along with Finance Minister Joe Ceci, spoke to delegates in a short question-and-answer session in the afternoon.

Notley reiterated a number of policy positions, saying the decision to run up capital spending and budget deficits, while investing in innovation and diversification, and hiking the minimum wage, have borne results.

“The proof, my friends, is in the pudding,” said Notley.

Notley will address delegates in a speech Sunday.