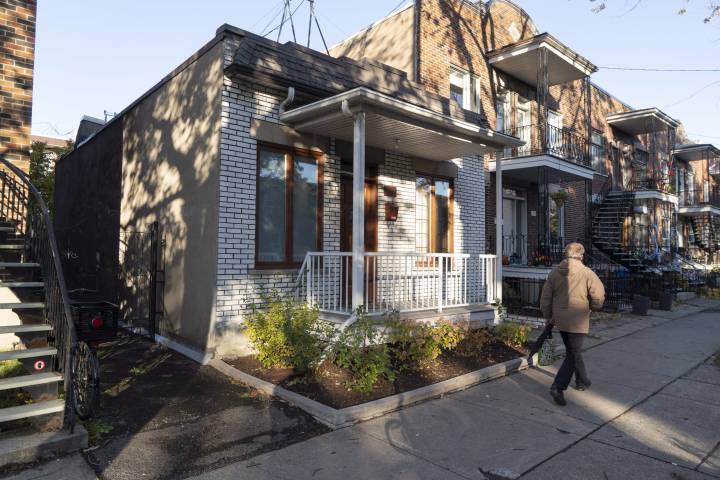 A Montreal borough’s quest to preserve its humble “shoebox” homes is highlighting the challenges that come with trying to balance heritage preservation with homeowners’ rights in a growing city.

Officials in Rosemont have decided to temporarily push back the schedule for passing a bylaw designed to preserve its 561 single-storey, flat-roofed homes after homeowners raised concerns about the process.

The homes were mostly built early in the 20th century, as tens of thousands of workers were arriving from the countryside to work in quarries and factories.

Today, those neighbourhoods have been integrated into the larger city, where the remaining shoeboxes are often tucked in between larger homes, serving as a throwback to an earlier age.

“They tell the story of the arrival of tens of thousands of people from the countryside who wanted to be homeowners but didn’t have a great deal of money,” said city councillor Christine Gosselin.


READ MORE:
Pointe-Saint-Charles’ Bâtiment 7 in the running for $40,000 revitalization prize

Concern over the fate of the quaint homes began rising in recent years when they became a target for developers who would knock them down to build bigger, more profitable housing, Gosselin said.

Before new rules were brought in five years ago, she said they weren’t even in the same category as other houses, which allowed owners to obtain demolition permits in a single day for a few hundred dollars.

The new proposed bylaw presented this fall would make demolitions nearly impossible in most cases.

Renovations and enlargement projects would have to respect the look and materials of the original facade, including a rule that second storeys be set back at least a metre behind the original face.

Gosselin said the rules are designed to strike a balance between allowing necessary renovations and preserving a unique form of housing.

“What we wanted to do is to make sure that the current wave of development in Rosemont didn’t erase completely the memory of this first phase,” she said.

“With sensitive urban planning laws we can accommodate growth and development and preserve the heritage.”

The effort to protect shoeboxes is part of a recent focus on preserving the city’s modest residential history as well as its grand mansions and public buildings.

But that comes with its own set of challenges, and some of the shoebox homeowners have been expressing concern about the city’s plan.

“We’re talking about houses that are around 100 years old, built with modest materials and not within norms that would necessarily be acceptable today,” said Wilfried Cordeau, who founded a Facebook group to inform shoebox owners about the new rules.

Cordeau said most of the owners agree that the homes’ heritage needs to be protected from developers, but he takes issue with the borough’s list of shoebox homes and its claim that 88 per cent of them should have a protected status.

Carlos Costa, who owns a shoebox he inherited from his mother, said his own home was designated “of historical interest” despite having mold and structural issues that make it borderline unsafe to live in.

He had hoped to leverage the equity in his property to demolish it and build a triplex to house his own family and two others.

Now, facing a lower property value and new regulations that will make renovations prohibitively expensive, he said he’ll have to sell for whatever he can get and leave the neighbourhood.

“In a way they’ll be contributing to gentrification, and I know that’s not what they want,” he said, referring to the process by which older residents are pushed out of developing neighbourhoods.

To prevent that process, both Costa and Cordeau said the administration should offer subsidies and technical support to help owners meet their new obligations, as well as refocus the rules to apply to a smaller number of homes with unique architectural features.

Gosselin said the administration has gotten the message that it’s time to go back to the drawing board, and officials will take a couple of extra months to review its classification and take owners’ concerns into account rather than passing the bylaw in December.

She said a city-wide committee is also studying the prospect of financial incentives for owners who want to preserve their homes’ heritage, but it’s not likely to be in place by the time the bylaw is presented early next year.