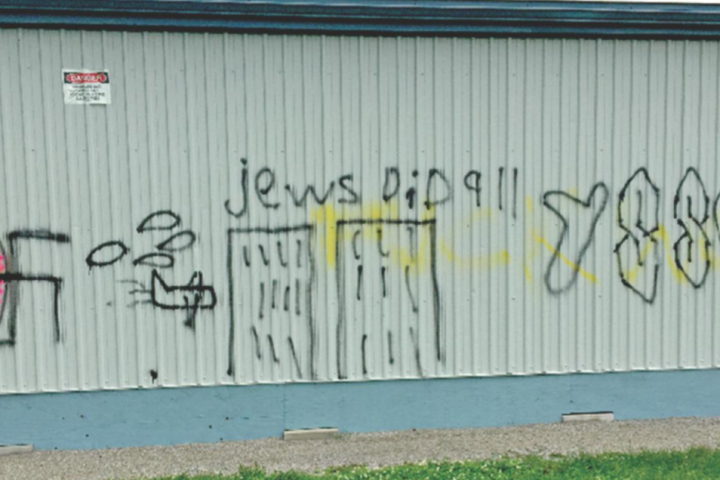 Fourteen synagogues across Canada receive mail warning that “Jewry Must Perish.” A Nazi flag and graffiti saying “Jews did 911” mars a high school. A U.S. Holocaust-denier comes to Toronto to speak at Al-Quds Day.

The attack at a Pittsburgh synagogue that left 11 dead and six injured occurred at a time of rising anti-Semitism in both the United States and Canada, according to statistics from authorities in both countries.

More than half of the religiously-motivated hate crimes in the U.S. in 2016 targeted Jews, FBI figures indicate, and the Anti-Defamation League said 2017 was even worse – a trend mirrored in Canada.

Jews were the most targeted minority for hate crimes reported to police in 2016, Statistics Canada said. Anti-Semitic incidents increased 24 per cent that year. B’nai Brith Canada said 2017 saw another increase.

Only a handful of the incidents were violent, with harassment and vandalism accounting for the bulk, but they speak to what some see as a growing legitimization of anti-Semitism, one that sometimes goes unrecognized.

When Jewish high school students attended an anti-racism seminar at York University, they were told to “shut the f*** up” and listen to “real persecuted minorities,” according to B’nai Brith’s annual anti-Semitism audit.


READ MORE:
What we know about Robert Bowers, suspect in Pittsburgh synagogue shooting

“We remain deeply concerned about the rise of anti-Semitism, including violent anti-Semitism, around the globe,” said Martin Sampson of the Centre for Israel and Jewish Affairs.

Sampson said anti-Semitism was unlike other forms of bigotry and hate, and was in many ways more pernicious, being longstanding and grounded in conspiracy theory.

“What underpins true anti-Semitism is a belief that the Jews are extra-evil, that they are some sort of cosmic evil, that they control the world, that they’re at the root of all that ails us,” he said.

WATCH: Anti-Semitic incidents up in 2017, according to B’nai Brith

“Anti-Semites believe this, which puts their belief one step away from action. Who is to blame them if they demonize or kill a cosmic evil? Yesterday was this exact dynamic.”

Sampson said when people needed scapegoats in complicated times, Jews have long been the targets they turned on. “Anti-Semitism is on the rise because hateful anti-Semites are intellectually deficient, angry and need someone to blame.”

He said it was important to call out, ridicule, prosecute, and marginalize anti-Semites.

“For those of us who are watching closely, yesterday was shocking, infuriating, and deeply saddening. But it was not surprising.”

Increases in anti-Semitism are sometimes linked to events overseas. When a Montreal Jewish school was firebombed in 2004, the 19-year-old who did it said he was angry that Israel had killed the leader of the Hamas terrorist group.

More recently, the impact of last year’s white nationalist and neo-Nazi rally in Charlottesville, Va. was felt in Canada, setting off what B’nai Brith called a “massive wave of vandalism featuring swastikas and other pro-Nazi imagery.” President Donald Trump’s decision to move the U.S. embassy to Jerusalem similarly led to anti-Semitic hate speech.

“What is most frustrating about these incidents is the culture of impunity that surrounds them,” B’nai Brith said. “The government often talks a good game about ‘zero tolerance’ for anti-Semitism and other forms of bigotry, but the reality is quite different.”