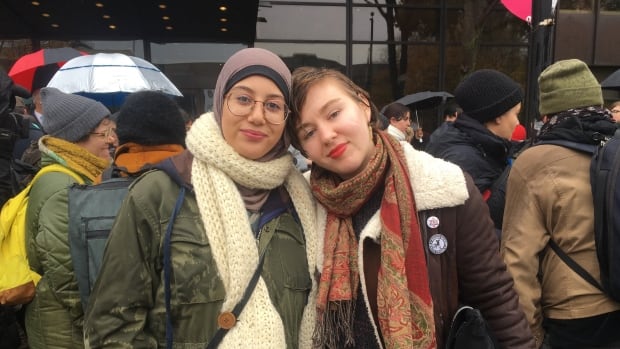 Jewish communities and citizens across Canada gathered together over the weekend to commemorate the victims of the Pittsburgh synagogue shooting and condemn what one rabbi described as « an outrageous act of evil. »

Vigils and rallies were organized in a number of Canadian cities, including Montreal, Ottawa, Halifax and Vancouver.

Montreal Rabbi Reuben Poupko, who is originally from Pittsburgh, said no Jewish community has been left untouched by the shooting that left 11 people dead and six injured.

A vigil set for Monday evening at Montreal’s Beth Israel Beth Aaron synagogue will be a chance for community members to draw hope and strength from each other, he said.

« All of us can relate to what happened, » he said in a phone interview.

« We go to synagogues that look just like [Tree of Life] synagogue. Our ties and bonds of history and of solidarity and our values are very strong. »

‘Light will block out the darkness’

Poupko said he grew up in Pittsburgh’s « tight-knit » Jewish community, where his father was a rabbi for 60 years.

He said that Jewish people have always been targets of hate crimes in Canada and elsewhere, and alleged that the number of those crimes have been rising in recent years.

But he said they’ve never experienced anything like Saturday’s mass shooting.

« Eleven people murdered in a synagogue in an outrageous act of evil, » he said.

Poupko became emotional as he spoke about 97-year-old Rose Mallinger, a Holocaust survivor who died in the shooting. 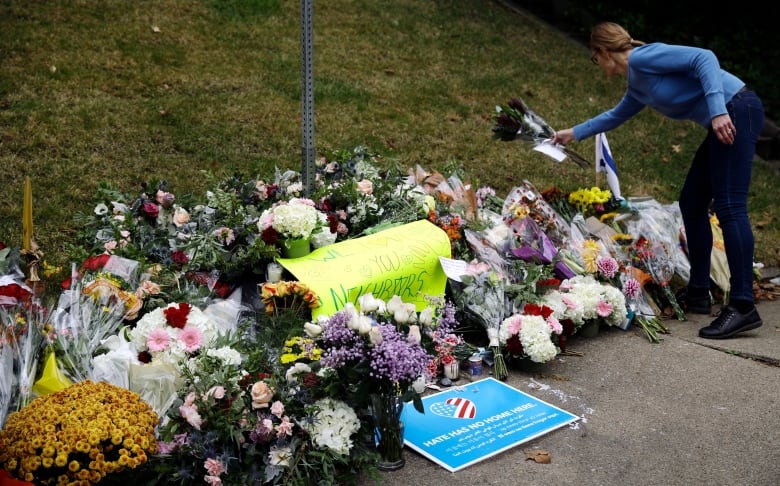 A person brings flowers to a makeshift memorial at the Tree of Life Synagogue in Pittsburgh on Sunday. (Matt Rourke/Associated Press)

« To survive the Holocaust and find refuge in a free country and lose your life doing what you’re supposed to do, going to synagogue on a Saturday morning … is not a thing that is easily understood, » he said, his voice breaking.

He said his community is comforted by the support of other faith groups and ordinary citizens, who have come together to unanimously denounce the acts of violence.

Poupko said Montreal’s synagogues were remaining open and the community would continue to fight acts of hate in the only way they know how.

« The best way is to continue to do what we do with greater intensity, » he said, « which is to lead lives of tolerance, to lead lives where we understand that ultimately the power of good is more powerful than evil, where we continue to strengthen the bonds between individuals and communities and hope the light will block out the darkness. »

In Ottawa, mourners planned to gather in front of the Human Rights Monument late Sunday for what was described as a solidarity vigil against anti-Semitism and white supremacy.

The organizers said in a statement that the event would be both an act of mourning and a demonstration against acts of racism and bigotry around the world.

« As Jews, anti-racist activists and residents of Ottawa, we want to send the message that hate crimes against Jews do not exist in isolation from the violent rise of white supremacy around the globe, » co-organizers Genevieve Nevin and Darrah Teitel wrote.

Another demonstration took place in front of Montreal’s Holocaust Museum on Sunday afternoon, while more events were expected to take place in Vancouver and Halifax.

Jewish groups and their supporters in Toronto will host a rally in Mel Lastman Square on Monday.

The organizers say the vigil will be on Monday and will bring the community together in a show of solidarity « as we try to grapple with this unspeakable act of anti-Semitism. »