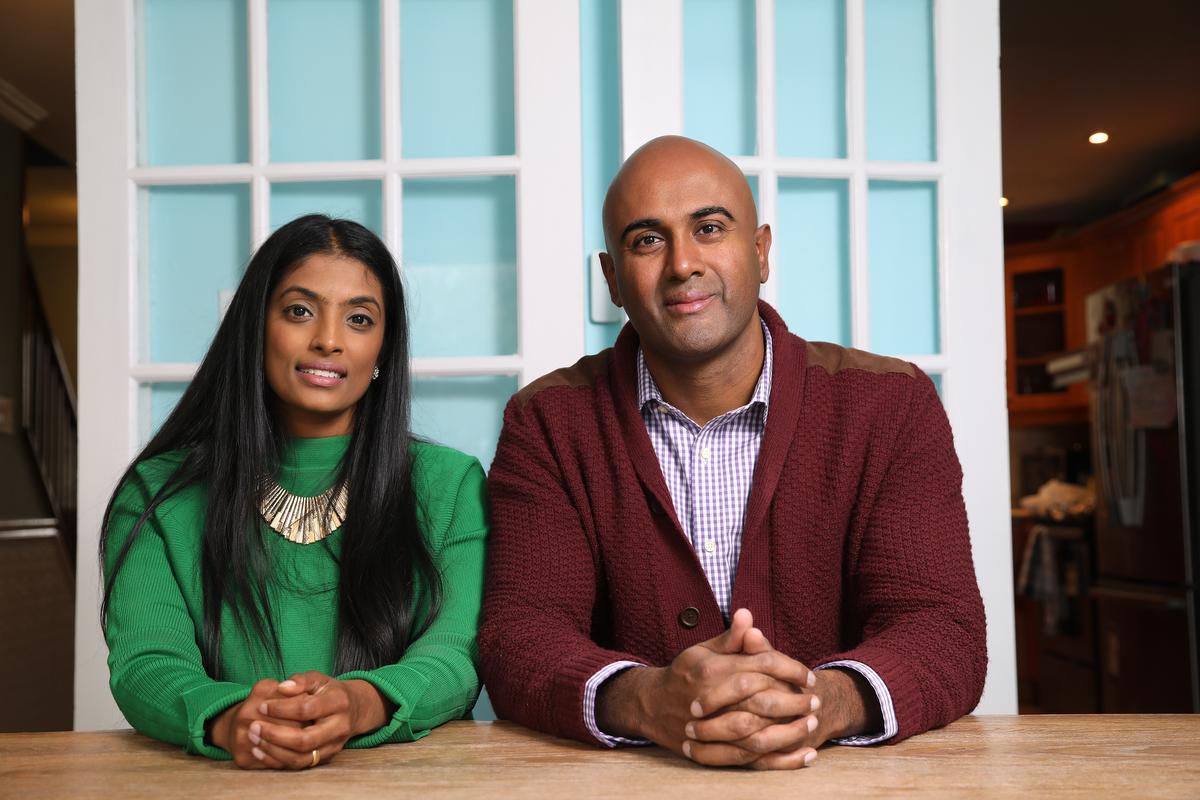 Education, politics and policy have long been part of dinnertime discussion at the home of Parthi Kandavel and Anu Sriskandarajah. But those topics will likely now dominate their every waking moment.

The pair made history last week as the first married couple elected as trustees to the Toronto District School Board, with Kandavel re-elected in Ward 18 (Scarborough Southwest) and Sriskandarajah winning in Ward 22 (Scarborough-Rouge Park).

“(The board) is probably a place where we’ll agree on more than at home,” jokes Kandavel, seated next to his wife at the dining room table in their two-storey home in northern Scarborough.

“We still have trouble figuring out what time the garbage should be taken out,” laughs Sriskandarajah. “So this might actually be easier.”

“We don’t know how it will play out. This will be new for us and new for the board,” says Sriskandarajah, one of 12 new faces elected to the 22-member board, which serves 246,000 students in 583 schools.

The couple say they share a similar vision when it comes to improving public education and ensuring all children have access to the same opportunities. But they differ on strategy. He tends to be more direct with people and more bold in his approach, whereas she’s more diplomatic and conservative.

“We definitely have different personalities, but I think it’s complementary,” she says.

Both are passionate about education. Kandavel, 36, is a math teacher at a private independent school in Scarborough — trustees are prohibited from teaching in a publicly funded board in Ontario. And Sriskandarajah, 32, is a York University professor in the Child and Youth Studies Program, where many of her students are aspiring teachers. When doing a PhD in sociology, her doctoral research focused on marginalized youth in her ward, and last year she co-authored a STEM (science, technology, engineering, math) Teaching and Learning Report for the TDSB.

And because being a trustee is essentially a part-time gig, with an annual salary of about $25,000, neither will be leaving the classroom.

Education is a theme woven throughout their relationship. They met in 2010 at a University of Toronto conference, and started dating shortly after, staying awake into the wee hours talking about education and politics. And, because Kandavel was in the midst of running for trustee in Ward 18, where he grew up and lived with his mother, there was plenty to discuss.

“A lot of our conversation was on the content of my brochures, what’s the messaging I’m putting out there, what are the fundamental ideas and concepts I’m championing at the door,” recalls Kandavel. “Much of it came out in our back and forth.”

He was unlucky at the polls, but not in love. Kandavel proposed at the spot where they met and the couple married in 2012, eventually buying a home in northern Scarborough because they were priced out of neighbourhoods in the south.

During the 2014 elections, Kandavel ran again in Ward 18 where his mom still lives, and Sriskandarajah helped him canvass. As an academic immersed in educational theory, she gained valuable insight from knocking on doors and listening to the concerns of parents, which typically dealt with crumbling buildings and outdated infrastructure.

And, because Kandavel won in 2014, Sriskandarajah gained a much deeper understanding of the day-to-day demands of trustees, such as the many phone calls and meetings with parents, community members and board staff.

So when Sriskandarajah decided to run this year — something she had never before considered — she knew what she was getting into. Initially, her husband was hesitant, because he was running in a tight race and had no time to help out with her campaign. But she was confident she could run her own campaign with her own team of volunteers. For weeks, they hardly saw one another, each focused on their own race.

Her plan was to run in the current ward Scarborough-Rouge River, which is the northeastern pocket of Scarborough, where the couple lives. But in the middle of the election, Premier Doug Ford introduced legislation to slash the number of city councillors, which resulted in municipal and school board boundaries being redrawn. The couple’s home is now just metres outside Ward 22, where Sriskandarajah ran. That ward, the most eastern slice of Scarborough, running from Steeles Ave. E. all the way south to the lake, is extremely diverse, including both affluent neighbourhoods and pockets of poverty.

“I felt that we needed somebody that would be able to represent the many, many different interests because the ward is so diverse,” says Sriskandarajah.

When the new term begins at the school board, on Dec. 1, Sriskandarajah says she’s committed to making evidence-based decisions and bringing “a fresh sense of optimism.”

“Coming from academia, our ultimate goal is to create positive changes and I’m hoping I can actually use what we learn to do concrete things,” she says.

Neither are ruling out a future in other political arenas. But for now, they are focused on their jobs, on being trustees — and on having children.

“We want to use our real-life experiences to enhance public education,” says Kandavel. “We’re both graduates of the TDSB and we want to give back.”