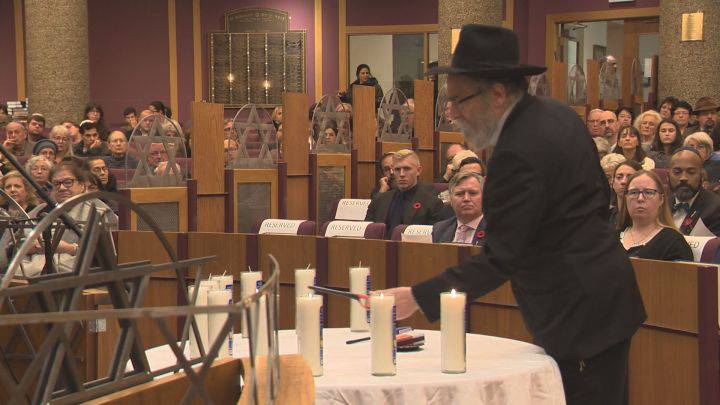 Edmontonians filled the Beth Israel Synagogue in the city’s west end Monday night to commemorate the victims of a shooting massacre at a Pittsburgh synagogue over the weekend and to condemn hatred.

“We’ve been outraged at this vicious anti-Semitic attack,” Steve Shafir, president Jewish Federation of Edmonton, told Global News. “As a community, unfortunately, the Jewish community is the most targeted religious minority in Canada in terms of anti-Semitic attacks.

“But something this heinous really does shake us.”

Shafir said even though the attack happened in another city, it’s being felt by Edmonton’s Jewish community because “it was an attack on who we are.”

“Tonight’s a chance for the community to get together and reflect on what’s happened, to help us really soak in the events of the past few days, to express our emotions and to come together as a community as a whole and to grieve.”

The memorial was attended by various politicians and leaders of various religious communities.

Candles were lit in memory of the 11 victims of Saturday’s mass shooting at the Tree of Life Synagogue in Pittsburgh, Pa. Joyce Fienberg, a Toronto-raised woman, was among the victims.

READ MORE: Confirmed in a Toronto temple, she was shot and killed in a Pittsburgh synagogue

Robert Bowers, the man accused of the killings, made his first court appearance earlier on Monday and learned prosecutors will seek the death penalty in his case.

Authorities in the U.S. have alleged he expressed hatred of Jews during the rampage and later told police, “I just want to kill Jews” and “all these Jews need to die.”

Watch below: Videos from Global News’ coverage of the shooting massacre at a Pittsburgh synagogue.

Mayor Don Iveson spoke at the Edmonton memorial Monday night and told attendees that while Alberta’s capital is a safe place, “Edmonton is not immune from hate crimes.”

“We saw swastika graffiti this past summer, two synagogues were threatened in the last year and groups espousing hatred somehow do operate still here in our city,” he said.

“However, I am comforted, as I hope you are as well, by how many Edmontonians have stood up, refusing to give such groups any platform in our community.”

READ MORE: Edmonton swastika graffiti to be condemned at rally, Notley says such hateful acts ‘not to be tolerated’

Watch below: On Aug. 6, 2018, Premier Rachel Notley said she was glad to hear some Edmontonians had planned a rally to condemn the swastika graffiti that had recently been discovered in the southwest part of the city.

“Almost a year ago, on a wet, cold October evening, Edmontonians from all walks of life and faiths, demonstrated their warmth in supporting our Muslim community in Sir Winston Churchill Square, one day after the lives of police officers and civilians were threatened in a violent way in downtown Edmonton. Leaders from our interfaith community attended in solidarity. Tonight, we gather once more with community leaders and representatives from many faiths.”

“They were proactive in terms of making sure that we didn’t need anything, or if we did, that they could support us and they were steadfast in their support for providing or diverting front-line services to monitor our institutions on a bit more of a regular basis in the immediate aftermath of what happened.”

Shafir said his community has gratefully accepted the offer from police.

“This should not ever happen to anybody for any reason whatsoever,” he said. “Whether it be a random act of violence or a targeted killing such as this toward any group, being Jewish, because of the colour of somebody’s skin or because of the way that they relate in terms of gender identity.”

–With files from The Associated Press