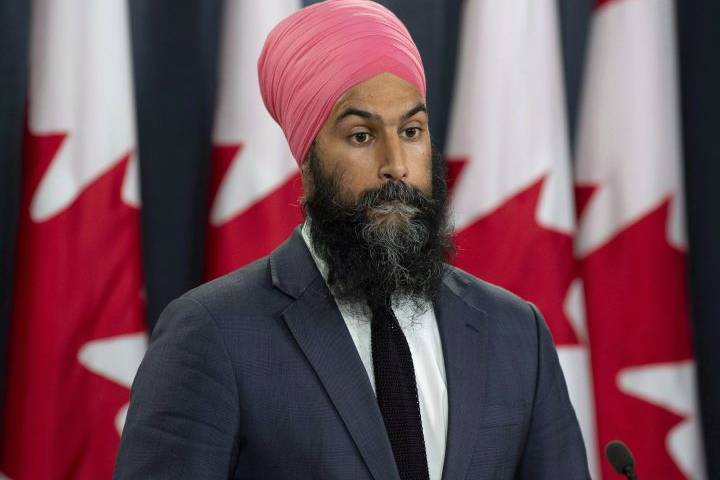 In a motion put before the House of Commons Monday, Singh and fellow New Democrats proposed that all money allocated to Veterans Affairs Canada (VAC) in a specific year should be spent. If money is left over at the end of the year, these unspent dollars should be transferred to the next year’s budget and targeted specifically to improve services and reduce wait times for veterans and their families.

“Over the past number of years money is promised to Veterans Affairs, that money has lapsed or not been spent,” Singh said. “That means veterans have been robbed of finances and resources for the services they need. This has to end,” he said.

The NDP proposal comes days before Canadians will mark Remembrance Day and the 100th anniversary of the end of the First World War.

”The Liberal government promised to address this,” Singh said. “They were standing up with us as New Democrats in opposition saying we cannot accept this treatment of veterans, but now they’re doing the exact same thing.”

The $372 million Liberals left unspent at VAC is in addition to the more than $1.1 billion Stephen Harper’s Conservative government left unspent while in office.

If passed, the practice of allowing money to lapse at VAC would effectively end. The NDP plan would also mean about $124 million a year more for veterans and their families, NDP figures show.

The money would be targeted toward improving services and reducing wait times and backlogs many veterans face when trying to access benefits.

“Veterans have had our back, at a minimum Canada needs to take care of them,” Singh said.

“This [motion] would end the theft of financing and resources for Veterans Affairs and ensure that we actually see the adequate levels of care and response times for veterans who have given so much,” he said.

Under the proposed plan, VAC funds left unspent at the end of the year will automatically be carried forward to the next year until the department meets its own prescribed service standards in 12 areas in which it is currently lagging behind.

These areas include wait times for decisions on disability benefits, long-term care, career transition and other programs, review and appeal timelines, and what some veterans have described as inadequate response times for VAC’s telephone service.

According to NDP veteran affairs critic, Gord Johns, these improved services will come with no added costs. He says the NDP’s proposal is “non-partisan” and calls the decision to support the plan a “no-brainer.”

“Thanking veterans and their families is not enough. Words must be backed by action,” Johns said.

“This motion will dramatically improve the lives of veterans and their families at no additional costs to taxpayers,” he said.

And while Conservatives had previously left more than a billion unspent at VAC, they announced their support for the plan Monday, with MP Cathay Wagantall saying all members of the Conservative party will vote in favour of the motion.

Meanwhile, Minister of National Defense Harjit Sajjan seemed to indicate the government would also support the motion, saying “we will always have the resources available for veterans.”

“When it comes to any motions supporting our veterans, our government will be supporting that motion,” Sajjan said Monday.

When Global News first revealed Liberals had allowed $372 million to go unspent at VAC, a department official said lapsed funding is “simply an administrative process” and doesn’t result in anyone receiving less than they should. The department added that VAC funding is “demand-driven,” meaning that money left over at the end of the year is a result of overestimated demand. This was reiterated by Sajjan.

However, Trudeau previously slammed the Harper government for leaving veterans’ support funds unspent. To a room filled with veterans on the campaign trail in 2015, Trudeau said, “Canadians know that this is wrong. A government led by me would make it right.”

Since taking office, the Liberals have reopened nine Veterans Affairs offices and rehired roughly 470 front-line staff who work closely with veterans. This includes roughly 260 case managers, who serve as the first point of contact for many veterans as they work to access the benefits they need and deserve.

The government also says it will invest an additional $10 billion more for veterans than the previous Conservative government had planned to. Much of this money will go toward enhancing services and creating new benefits, such as reinstating pensions for life and providing new educational opportunities, according to the government.

Still, with money left unspent each year at VAC, the NDP says it’s time the parties come together to support a plan that will see veterans receive the benefits they “need and deserve.”

“And if the service levels were adequate, efficient and they were meeting their own standards then maybe the money wouldn’t need to be spent,” Singh said.

“[But it] is not acceptable that veterans are promised funding and that’s effectively robbed from them, year after year.”

A blueprint to help Mayor Tory get Toronto unstuck